Prussians ~ Now With an Added Pinch of Lutzow!

Back into Napoleonic's for the moment and, as usual, I'll try and get as much stuff done as I can until this jag wears itself out.


First up is a couple of squadrons of Lutzow's Friekorp Hussars. The Friekorp cavalry only had two squadrons as well as 2 or 3 squadrons of uhlans. So I figure: 4 figures per squadron will work for most Napoleonic games. It also works out as a unit of 8 for Sharp Practice. I'm waiting on the command figures for the uhlans and I'll do them when they arrive. I expect them to be an easy paint job. 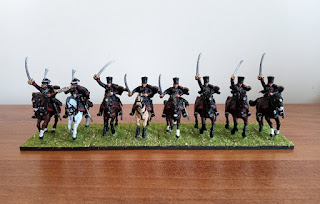 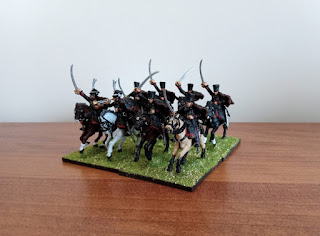 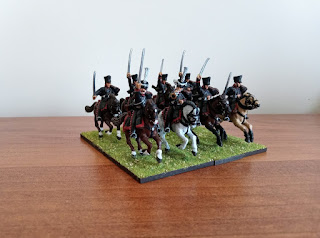 The figures are Perry plastic French Hussars with heads from the their plastic Prussian Infantry boxed set. The commander and hornist have their original French heads. They look okay. Suitably "Waterloo" Prussian with all that black.

And I finished my final Lutzow Friekorp  infantry battalion and that's all I'll be doing. I'm unsure how many battalions there should be but there were at least three. All standard Prussian regiments had three battalions, so three it will be! 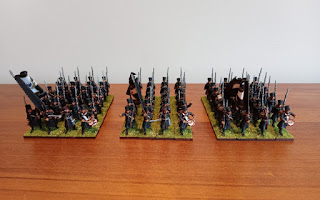 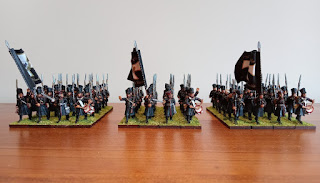 And I did a commander too which appeared in some previouse pics. I suppose, I should say this is Lutzow himself. But should I be so presumptive as to tempt fate? Who knows? Who cares? 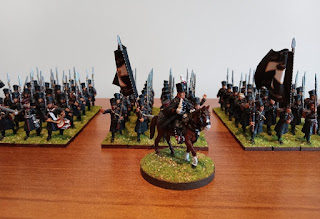 I'll be adding some some skirmishers in the form of a Tyrolean Jaeger company but I also need a company of fusiliers in the litkwa and with a horsehair plumed shako. I don't know where to get these last ones. Brunswick Leib Regiment in great coats would work, but who makes them? No one. I could sculpt them but I don't want to so I might just double up on the Tyrolean's.

I also did another 6 French light infantry voltigeurs in great coats. These are again Perry figures. Not their best in my opinion. I didn't really enjoy painting them but they look okay, I suppose. 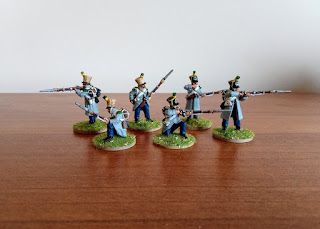 And finally, some more sabot bases. These ones are for officers/leaders for Sharp Practice in the main, but I guess they can be used for just about any other game where required. These were made for me, once again, by Mike Parker at Battlefield Accessories. 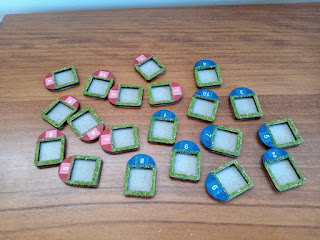 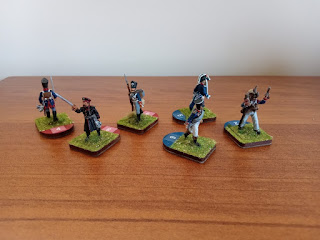 So that's what I've done. More to come soon. I'm tossing up whether to do another French leger battalion or maybe I'll do Lutzow's gun battery.
Posted by IanKH at 23:03