Putting a Smile on Your Dial

I've been doing a whole bunch of wargaming things recently mostly related to WWII gaming and other stuff. I've ordered things from overseas and from here in Australia and found some more things/projects that I put on hold for some reason that I've forgotten.

First up are these mdf casualty dials that I got from War Bases in the UK. They took just under 2 weeks to get here through the post and they came ready made. All I had to do was a give them a coat of pva and dip them in some home made flock. I didn't really have to do this but I want them to blend in a bit when I use them. Besides, it makes them look a bit nicer. 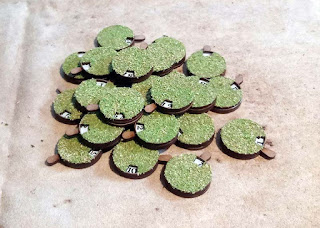 I was looking in a box for something and I found these picket fences that I ordered from Sarissa Precision last year. They were all made and undercoated and half of them were already painted. All they needed was a coat of paint for the undercoated ones and some flock for all. 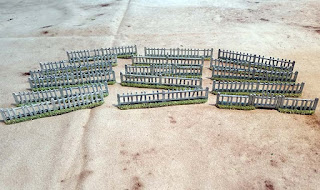 I think this was just one pack of them and there's plenty to go around. 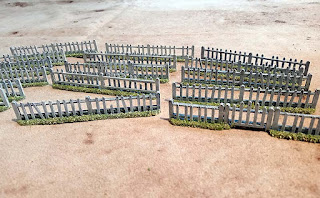 I needed some rural buildings for WW2 Russian Front and I didn't want to break the bank. I've been  looking around for a while and I settled on these 15mm buildings from Battlefield Accessories. I chose these for several reasons: 1) They were cheap, 2) The owner Mike is a member of my club (so they're a local business) and, 3) Because they're plain and that means I can easily model them to suit what I want. 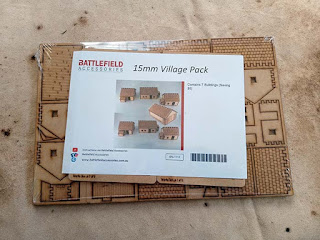 They may be 15mm but they are a good size to create a built up area footprint when incorporated with other terrain pieces without looking oversized. 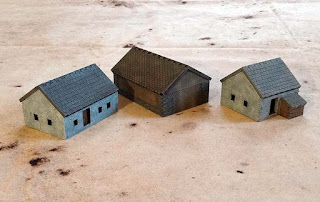 I added some rough artists impasto medium to give the buildings some texture and dry-brushing. They were easy to put together and they look okay. They actually have a detailed floor inside that isn't visible in these pics. 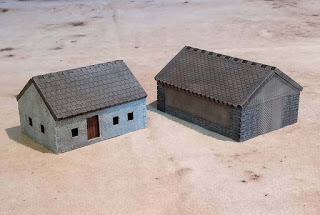 Email ThisBlogThis!Share to TwitterShare to FacebookShare to Pinterest
Labels: Terrain

Our club has a new home and last night I attended our inaugural meeting and played a game of Through the Mud and the Blood, a WW1 game by the chaps from Lard Island. The game was set during the failed Allied landings at Gallipoli in 1915.
The scenario  had men of the Australian Light Horse mounting a night raid on the Turkish trenches in a bid to gain intelligence prior to a general attack. This is only the second WW1 game that I've ever played. They first was about 20 years ago in Sydney and also involved the Australian Light Horse and Johnny Turk.
All of the figures and terrain were supplied by John S and all of the these pics were taken by him. My fellow ANZAC commander was Lorne and our fez wearing, full bodied coffee drinking opponents were Leith and Richard.
The following text is also by John & lifted directly from our club's Facebook page: 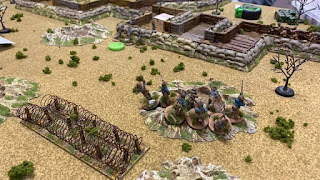 The ANZACs made three breaks in the wire and initially snuck forward on a moonlit night without the Ottomans spotting them.
Some sections were astute enough to be able to sketch out the defences without having to enter the labyrinth. Some sections made it to the trenches before the alarm was raised. The veteran ANZACs had the best of a sharp fight in the south but could not overpower a sentry in the north.
The ANZACs started taking a few casualties but the Vickers HMG bested their Ottoman opposition; driving the Turkish gunners away. This helped them get away with the scouting info. One section of ANZACs nearly got wiped out. These men were not helped by having a plan so doubly cunning that they did not even know it was a plan.
But overall the ANZAC casualties were light as the Ottoman reserve squads arrived just too late. Success to the ANZACs! 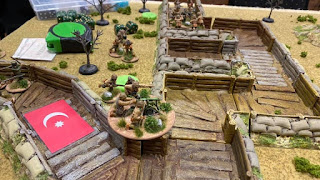 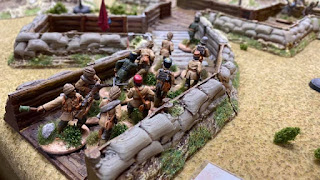 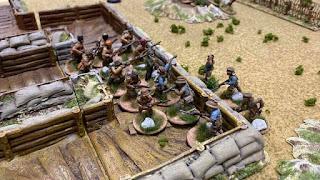 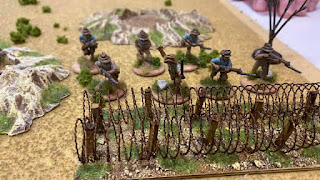 L - R Leith, Richard (a different John), Lorne and me without a head. 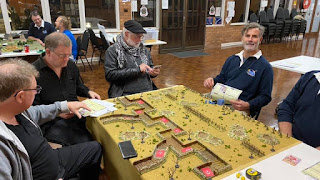 The terrain and figures were absolutely first class. All of the terrain was 3D printed by John (not the John pictured above). It was a great scenario and it was good to have played a WW1 game that didn't involve all of the mass death and destruction that one would normally associate with that conflict.
Thanks to John S and the other players for a great game in our new home.
Posted by IanKH at 00:53 2 comments:

Macedonia v's Carthage ~ To The Strongest

One fine day in Sicily...
Two great armies stood across the plain looking at each other. The skirmishers in the front ranks advanced and the battle began.
Today I introduced my friend Pete to, To The Strongest. He had a Carthaginian army that he inherited from his son and I brought my Macedonians along to give them a good beating. To make up numbers I took my half completed Iberians to fill out the ranks of Carthago. 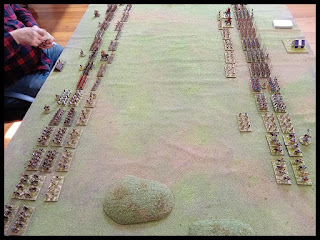 I played a couple of games of TtS last year so I was pretty rusty on some of the finer details. But the idea of the game was to get a basic game happening. We can iron out details and other things we got wrong in later games. Today was about getting figures on the table and getting a game going. And it was a great game!
My weak left. It was held by theurophoroi, Thacian peltasts and light cavalry. 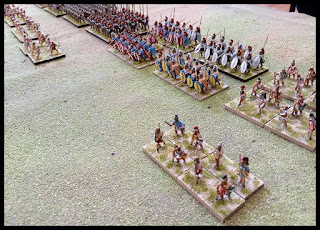 Facing them were the Iberians who were pretty much equal in infantry but stronger in cavalry. 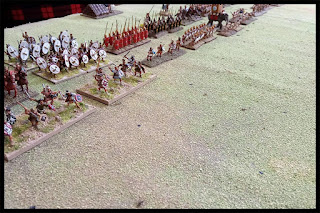 The early game was very much a clash of skirmishers. Javelins and arrows few as the light troops fought. Neither side gained any advantage in the initial exchanges. There were very few hits and all of them were saved. I sent my skirmishers well ahead of the phalanx, opting to keep my pikes in place and advance when the way was clear. 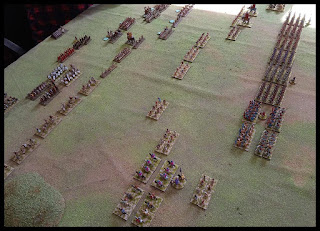 The first few turns were spent trying to get our light troops into range and then we set to a war of arrows and javelins. We kept record of the arrow ammunition but not the javelins. They did bugger all at first but eventually our units started falling and going 1 for 1 as our missiles hit and armour saves were failed. 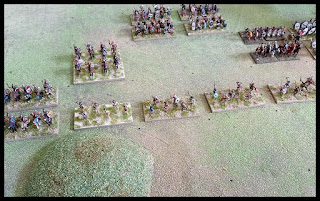 The Carthaginians deployed with their Citizen Infantry and Italian allies in the center. They put the Iberians on my left and a mix of Gauls and Numidian horse facing my right. I deployed in a classical Macedonian way with my strength on my right and my weaker troops on my left. 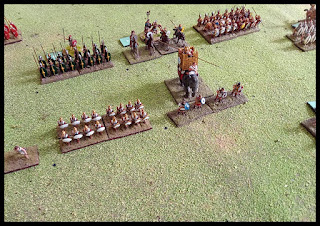 The first real fighting happened on my weak left. The Iberians took some high ground and their cavalry soon began to out flank me. I had advanced a bit too far and now I had to try and protect my flank. First blood went to my light horse who charged the flank of some heavy Spanish cavalry (The little red dot is what we used to mark "Disorder").
Also, we used a bag of chits for orders/activations and we each had a deck of cards for our combat/saves. I found that cards were a bit to intrusive for 15mm troops so I made these up using Photoshop. 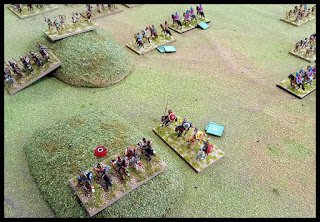 I put out a couple of Elephants. They look great and really add flavour to the game but they're are a pain in the arse. They broke a couple of light units but I was too afraid to get up close behind them in case they rampaged through my phalanx. Both ended up running amok but they did very little disruption. I'd definitely use them again, but maybe off to one side and not right in front of my best troops. 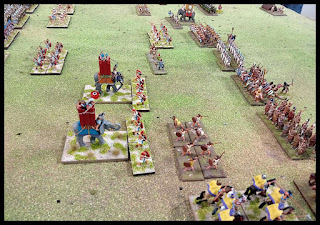 I eventually decided the time was near for some bold action and my king advanced the heavy Macedonian cavalry and charged in to a large unit of Gallic heavy cavalry (see above). For a few turns the battle kept on going with neither side gaining the upper hand. My smaller unit of cavalry was pushed back by a warband and got flanked by Numidian cavalry who entered some woods on my right (we weren't sure what to do here but we'll work that out for later games).
However, in the very first charge the Carthaginian general was killed (I think his name was Handlebar Barker). This put a dent in the Punic plans. 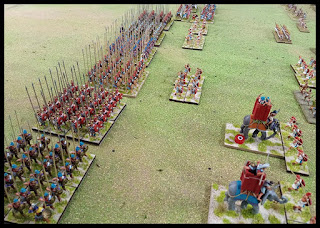 As the fight on my left continued my light cavalry were progressively defeated because I was stupid and used them to charge instead of using their missiles. As you can see I was getting well and truely out flanked. The only ray of light was that General Pete was concentrating on out flanking me and neglecting the mass of Iberian foot who just sat an watched for several turns. 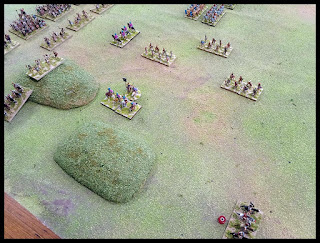 Eventually the skirmishing ended and the pikes got stuck in. There was plenty of push and shove for a couple of turns but eventually my pikes began to win and broke through the center in several places. The Carthaginians were almost broken but by this time the Spanish infantry were getting stuck in and I was loosing badly on that flank. 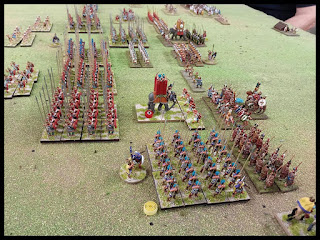 My king charged his companions once, twice, three times into the Gaulic cavalry. They were a deep unit like my own and they were on the verge of collapse but I just couldn't break them. The Numidians in the woods had managed to Disrupt my second unit of heavy cavalry and I couldn't rally them.
The Spanish dished out more punishment on my left but I was still hanging on by the skin of my teeth. The Numidians hurled more javelins in the flank of my cavalry but they held on. A second round of Numidian darts flew from the woods and my proud heavy Macedonian cavalry broke and so did my army.
A great cheer went up! (Literally - We had a few onlookers by the end of the game and the final couple of turns were on a knifes edge.) Just like at Waterloo 2000 years later: La Garde recule! Sauve qui peut! And the rest of the army faltered and broke. 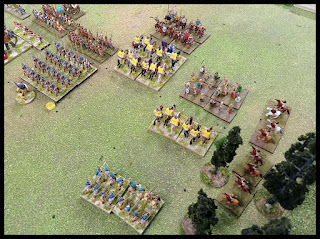 This game was an absolute blast. We certainly got a lot of things wrong and missed many of the finer points. A reread of the rules will reveal plenty of mistakes but we got the basics down pretty quickly and we had a fantastic game that came down to the wire. The armies were big, there was plenty of colour, we both won and lost and buggered things up and it was great.
Flipping over the cards for the combat is great. It gives the game a real gritty feel. Not like rolling dice at all. Flipping a high card and slappin' it down felt great (especially towards the end).
I'm really looking forward to a re-match. Thanks very much to Pete and Robin who cheers us both on to victory (unfortunately I didn't get there. Bugger!)