"Is This Andy's Factory?"

Within the ruins of a post-war factory complex somewhere east of the Berlin Wall, Colonel Zharkov commander of BORIS (Bureau of Revolutionary Insurrectionist Strategies) plans to unleash the power his latest doomsday weapon. However, the Colonel has not counted on the resourceful Dorian Alpha and the Omega Squad...

This set was made by my friend Brendan Day it was in storage and he was going to trash it but he offered it and I took it. I't a bit small (about 30" x 30") but it has enough character and different levels for a good and visually exciting game.

So, on with today's exciting episode of Omega Squad - "Is This Andy's Factory?" 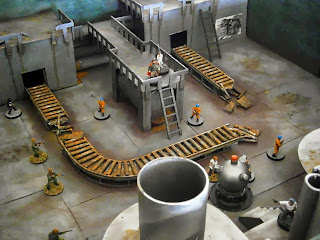 "Protected by his personal bodyguard - Katya Nadzov - Colonel Zharkov looks on as the Omega Squad backed by a section of SHAG Troopers crash his party." 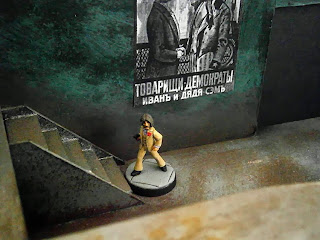 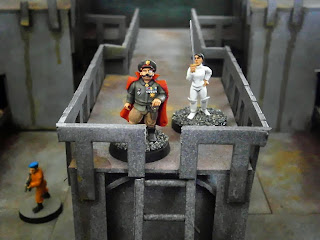 "Unaware of the danger, Colonel Zharkov looks on." 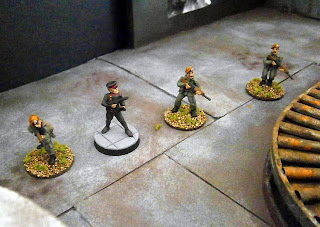 "Dorian's chauffeur, and former guardsman, Blake leads a section of SHAG Troopers into the fray. Behind them Amelia Horne prepares for a diversionary sneak attack." 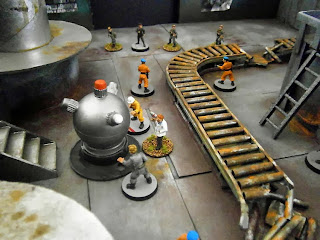 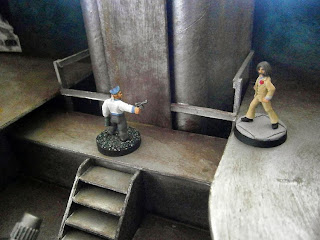 "Leaping from the shadows, Dorian Alpha shoots it out with Bogdan Bogdanovich." 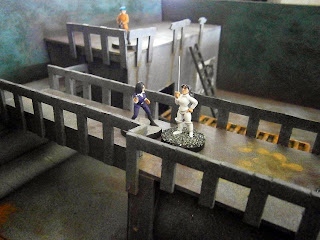 "Amelia Horne sneaks in for her diversionary attack but Katya Nadzov is waiting..." 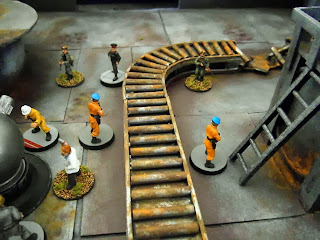 "Meanwhile: Blake and his SHAG Troopers Take out some security guards and technicians." 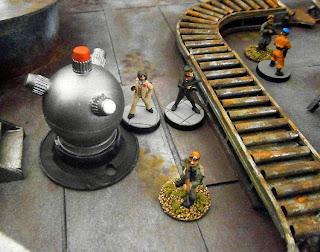 "After dispatching Bogdanovich and the Soviet technicians it's now time for
Dorian Alpha to reverse the countdown." 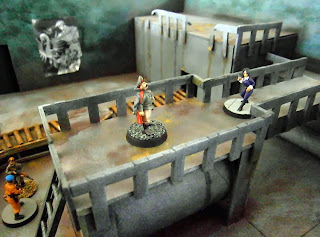 "After a furious fight Amelia Horne comes out victorious however, she has been wounded by Katya's blade. Seeing her weakness The Colonel takes aim with his high caliber pistol - Wounding the plucky beauty and putting her out of the fight." 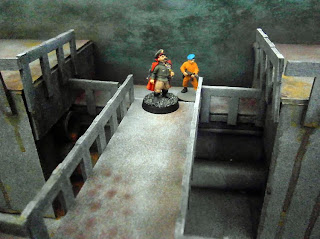 "With the way clear the thwarted Colonel makes good his escape where he shall,
no doubt, return in future episodes."


And thus ended the game. The redoubtable cast of Omega Squad once again saved the day although Amelia Horne had to visit the emergency ward thanks to that evil Soviet's well aimed shot. Will the plucky and beautiful Miss Horne make a full recovery? We certainly hope so...!
Posted by IanKH at 22:00 1 comment:

A Bit of Security Painting

I managed to get some time to paint some Time Lift Security and Federation Security - Both from Crooked Dice. I like the results of both of these figure sets and I'm planning to order the Time Lift with rifles and replace their heads with the beret soldier heads also made by Crooked Dice. I saw this done on their forum and they look great. Just what I was looking for to make my SHAG Troopers for my 7TV program - Omega Squad. 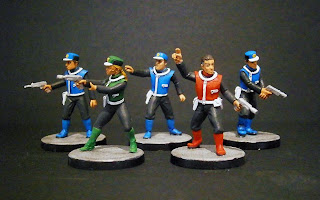 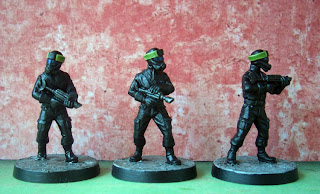 Here are the first couple of sculpts I've completed since my armatures arrived. The Boogie-Woogie Bugle Boy and another explorer. I've also started work on some 1960's/70's space types. Infact I have a whole bunch of space types planned - One lot that looks a bit Space 1999-ish and another that is inspired by the Robinson family from Lost in Space. Why" Because the world has been crying out for a Dr Zachary Smith figure for many a long year. 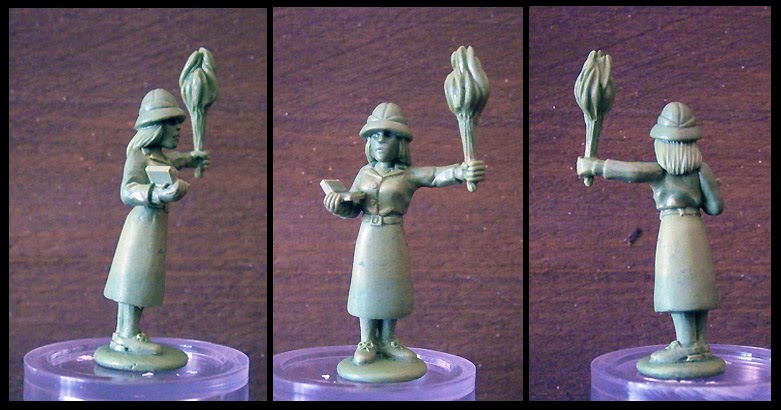 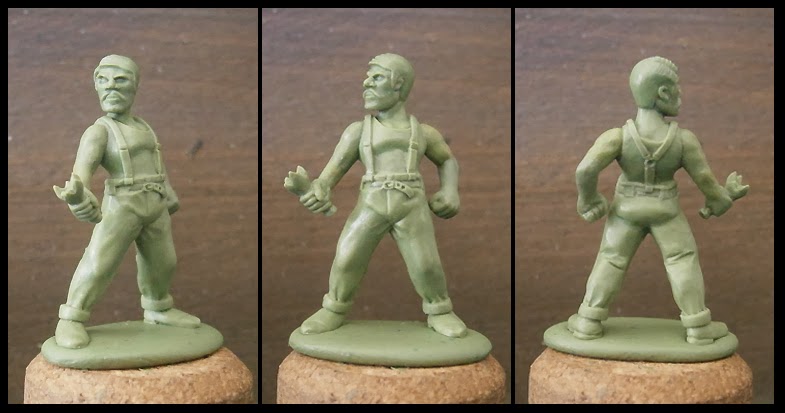 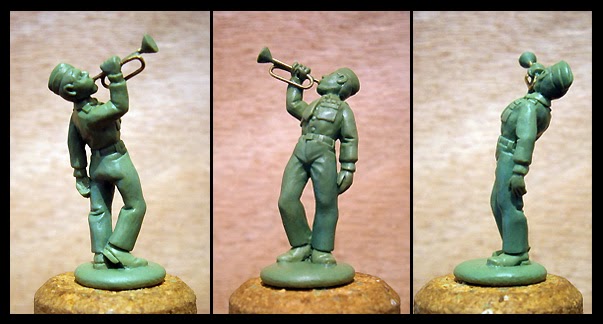 O frabjous day! Callooh! Callay! Now I can start sculpting again. I've started with the boogie-woogie bugle boy to go with the Not The Andrew Sisters and another explorer type (although this guy may change).

More soon
Posted by IanKH at 03:35 No comments:

Here are some more of the sculpts I finished a couple of weeks ago. I use Ebob's 28mm skeletons as armatures and I ran out of them. So whilst I've been waiting my sculpting drive has ground to a halt. This isn't such a bad thing considering that we here in Melbourne have been having an indian summer heatwave and my work area has been unbearably hot. The heat is due to break tomorrow.

But, in the mean time here are some of the other sculpts that I've been posting on other forums. First up a couple of Outer Space Adventurers: 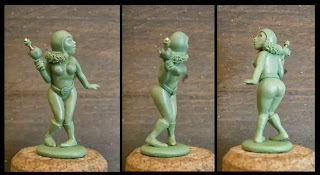 These ones are more 30's/40's Pulp. The singing sisters need a boogie-woogie bugle boy and a microphone to complete the set. The other guy is just another ruffian type. 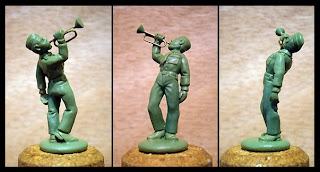 And finally some 70's cops/spy-fi types. I reworked the lady from the original pic posted last month. 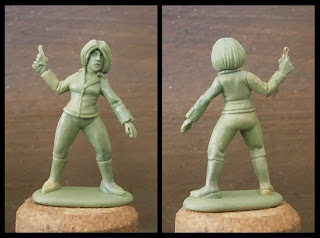 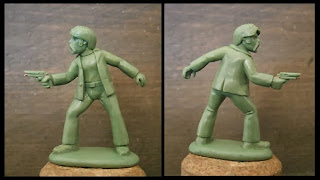 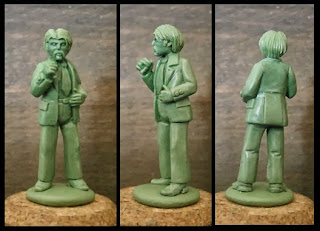 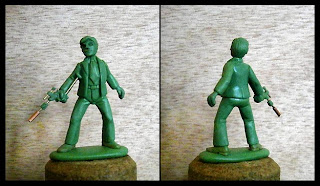 Well, I haven't been lazy

It's been a while since I posted anything here but it's not due to laziness. I've been busy sculpting a whole bunch of figures but then I tend to forget that I'm running this blog.

I've been planning to release a bunch of sets of pulp figures and I've been furiously sculpting. I've changed my sculpting style and opted for a bolder and simpler look. I feel that this style works better for the pulp genera. I'm planning each set to have 5 character figures plus a model that fits in with the overall theme of each set (for instance 4 explorers and a mummy or 4 hillbillies and a moonshine still).

The change in style has also resulted in better figures all round. Here are some of the new figures. I'll post more later: 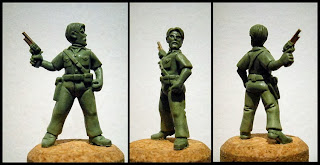 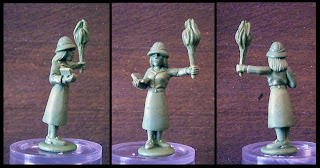 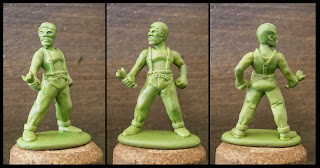