What does this strange title mean?

It means that my tiny fleet has grown - with larger, more powerful  ships!

As for power they each have an engine and some have towers but I think that they are all classed as having towers in the Ad Mare Bellum rules. The engines are basically light torsion projectile weapons such as light ballistas or scorpios.

I'm using the 5's primarily as Hellenic but the actual models are Carthaginian. I'll probably use them as quadremes (4's) sometimes too. As for the 7, I wanted to include a couple of bigger, hard hitting ships that canbolster the line a& also act as squadron commanders. I also have a Octeres (8) waiting on my desk and that will be my flagship.

Just like the pictures below I have, waiting to be done, another 6 quins, another 7 and the 8. That should complete my fleet for the time being.


I had a lot of fun trying to paint the eyes on the prows. 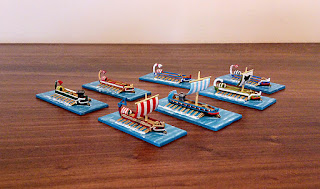 New Additions to My Hellenic Phalanx

I've added another couple of units to my Successor army. Two units of thureophoroi. However, I did cheat a bit with these guys,  because they were already 90% done. I both units last year (I think) made up of 10 figures on two large 80mm x 40mm bases. So what I've done now is make their numbers up to 12 and base them on 40mm squares. So the unit foorprint is the same dimensions but they are a bit more flexible and the unit looks fuller. 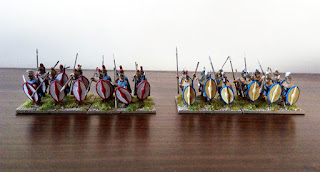 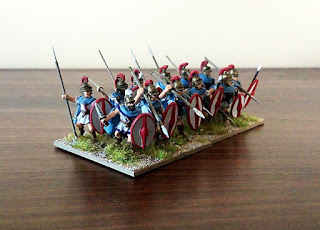 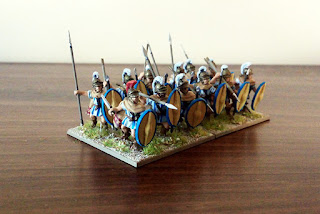 So I've decided to build a Successor army. In particular I'm making Antigonid Macedonians. The reason I chose this kingdom is because I think the figures will be able to serve as various other lesser Successor states such as Pontus or a Pyrrhic army (or even as Carthaginians at a stretch).

This army will also go along with my tiny fleet, which is about to have larger Hellenic ships added to its numbers. Together the land and sea forces will go together well for a, hoped for, campaign next year.

As it were, I've finished my first two units: A lochi/regiment of Chalkaspides (Bronze Shields) and the Agema of the Peltasts. The Chalkasipdes are pretty much the "regulars" of the standing army and form the bulk of the phalanx. I'll also be adding Leukaspides (White Shields) which are more-or-less reservist phalangites, thureophoroi, Thracians, Thessalonian cavalry and probably some Gaulic warbands.

The Peltasts are not like the skirmishers also called peltasts. These troops are more like the elite or guard troops of the Antigonid Macedonian army and the Agema is the premier regiment. The peltasts are lighter armed than regular phalangites but still considered heavy infantry.

I'm not sure what set of rules I'm basing these guys for. I decided to go for 3 figures to a base to cut down the amount of figures I need to paint and also cut down the cost of figures (because I plan to do quite a few of them).

I wanted to make the footprint of a standard pike unit 80mm x 80mm. This won't fit with many rules and some people wont like the 20mm/40mm depth of the bases. But when it comes down to it: I don't care. Some will also be upset about the 3 figures to a base instead of 4. I don't care about that either. If needed, I'll play Hail Caesar or IMPETVS with them instead of the more pedantic sets of rules.

So here's the small start of, what I'm hoping, will end up being a big little army. The figures are 15mm Xyston. 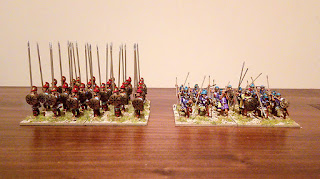 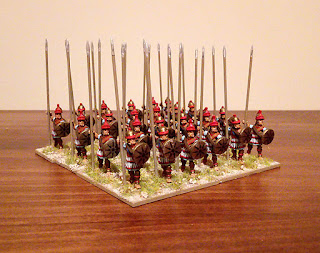 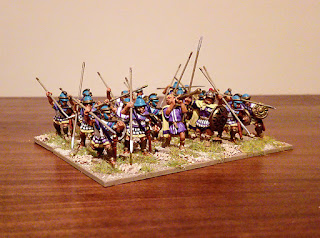 I had a game last evening with Richard at NWA. This was the first time I used my tiny fleet (dubbed the Athenian Fleet for this game). We used the Ad Mere Bellum rules by David Manley.

It was great to see my burgeoning fleet arrayed for battle on Richard's very nice Deep Cut Studio ocean mat. And after this game, I'm quite happy that my second order of 12 quinquremes, 2 Seven's and an Eight have arrived and waiting to get on the paint bench.

For this game it was Greeks v's Romans.

Initially the Richard had 10 quinquremes and a Seven against my 15 triremes (10 cataphract and 5 aphract). This proved to be fairly unbalanced.

So, we had a "half game" which, because of the draw of the activation's, saw my fleet get smashed front on.


From the first "half game." 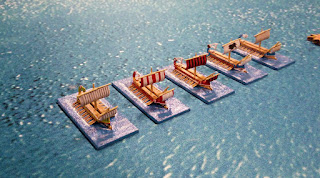 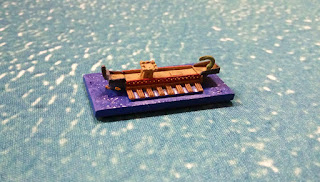 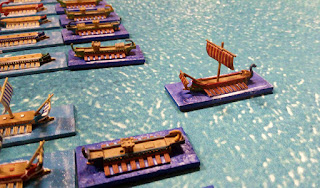 As I said, this front on ramming smashed my lighter vessels. 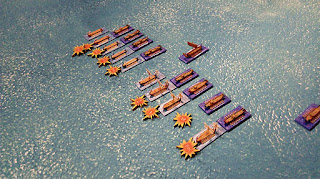 The first ever ship of my fleet to be wreaked. 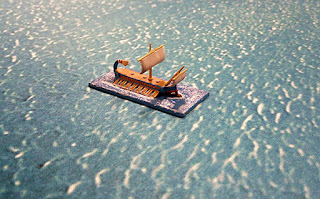 We then decided to restart and add a bit of differentiation. This consisted of my Greeks being assigned the Maneuver aspect and the Romans designated as Boarding. The difference being that I was better at ramming and my opponent better at boarding.The Romans also had siege engines, towers and corvus.

So, arrayed against my 15 triremes were 8 quinquremes and a pair of sixes. So I had the numbers and the maneuverability but the Romans had size and toughness. This really made a quite a big difference.

This time around, I managed to maneuver into position to get some of my ships into the Romans resulting in immobilising one ship and capturing a couple. The Romans drew the card for the next turn and dropped their corvus's (or should that be corvii ?) onto several of my ships and lock them together. This resulted in a couple of my ships being captured and a couple were wreaked.

In the following turn my brave Athenians managed to back-oar a couple of ships and inflict some missile damage on some of the Roman crews. One of my ships also managed to break through the Roman line. As luck would have it I drew the card for the next turn (2 turns in a row!) and drove my ships back into the oar-banks of the Romans. This didn't really do me much good. One of my rams was front on and it was my ship which was wrecked.

In Richard's next turn his Romans managed to board and capture a few more of my ships and I only had two ships remaining without damage. Out of 15, three were wrecked and about 6 were captured. The remaining four were heavily damaged.

So, it seems the trick is to ram and back out fast. Don't get caught and boarded by Romans. But that, I think, is easier said than done and the only way to find out is to have some more games.

Some pictures taken by my opponent, Richard. 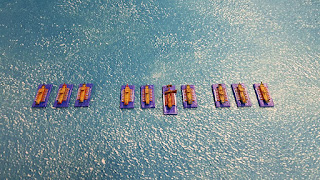 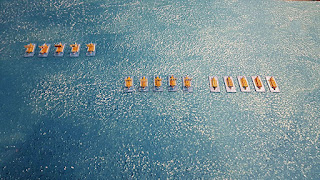 Our first clash again, this time from the Roman perspective. 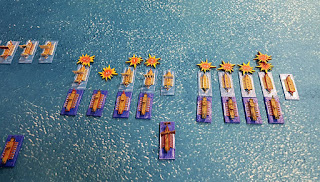 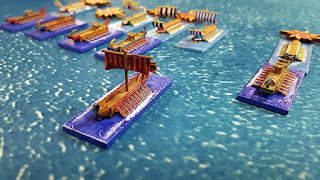 The scene from the second battle. As you can see I tried to avoid
frontal ramming and aimed for the Roman oars where I could. 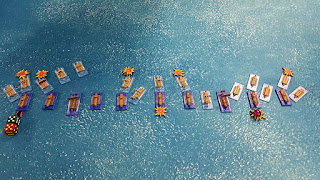 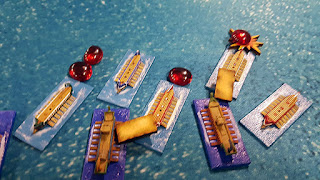 One thing became obvious from these two games and that is the need for plenty of counters. Counters are needed to show: Hull Damage, Crew Damage, Immobilised, Wrecks, Fire, Captured... I think that's all. In the pic above we improvised with blast markers for damage, gems for crew damage and small planks for corvus.

I can't wait to try this game again. We're already looking at a couple of house rules to add a bit of spice. I have a bunch of larger craft to paint up and Richard has a fleet of triremes on the way. So, in the future we should be quite evenly matched. There are also others at our club who are interested and have started fleets and we're looking to incorporate land and sea battles into a Late Successor / Early Roman campaign some time next year.

Should be interesting times.