In my last post I mentioned that I wasn't really happy with my initial Roman Legion so I came upon a solution which I like.

As you can see from the photos I've doubled the amount of hastati, principes & velites. The velites were easy because it was just a matter of painting up another unit of 4 bases. However for the heavy infantry I decided on a different solution.

What I did was remove one figure from each base filled in the area with some grit and flock and put the bases side by side again. So this gave me a smaller looking unit of 12 figures (instead of 16) with four figures left over. All I needed to do was paint up another 8-pack of figures and I had a second unit.

This worked for both the hastati and principes. For the triarii I removed the figures from the end of the two bases I already had and painted up another four figures. Done!

This looks much better to my eye. It's still small for a legion but the quincunx formation looks better and I'm counting on a second legion to complete the illusion. I also have some Italian allies on order to make up the numbers (in true Roman fashion). I was going to go for Iberian's but went with the Italiotes at the last minute.

Oh yes... I'm also getting some equites ready for paint as I type. I'm going small for these guys - If the hastatii, principes & velite each amount to 1200 troops then each unit equates to 600 troops. So... I'm thinking that 4 bases of cavalry should account for the combined cavalry of 2 legions ~ but I might boost it to 6 bases later. We'll see... 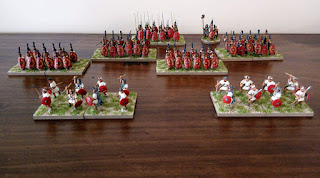 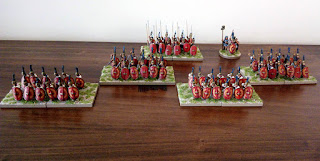 So I decided to try my hand at Polybian Romans. Most of this is guesswork. I have an idea what they should look like, how they should be organised and who they should fight... But putting that into wargaming terms is where I get a bit lost.

From what I can gather by looking a several different sets of rules this group pretty much makes up a legion. I understand scaling and all that but it looks wrong. I don't think in terms of movement/combat/game elements. I think in terms of true organisation and how can I recreate it. But to me this looks much too small to be called a Legion.

I think I should double it (at least).

My plan is to eventually make a simple Consular Army - 2 Roman Legions and two Auxiliary Legions. I'd like to use Spanish and Italiotes in this role.

Also, I'm not sure about the individual units. I'm thinking that each one should be made up of 4 bases. And just to contradict myself; two bases making a little square looks good to me but - as I said - Too small & dinky. Come to think of it 2 bases makes a century and 4 would make a maniple - That makes sense.

Anyway, here's my start but all told... This army confuses me!


All figures are 15mm Xyston. 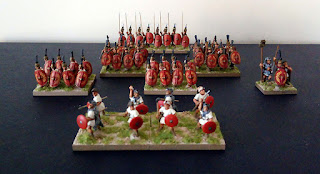 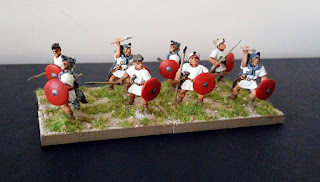 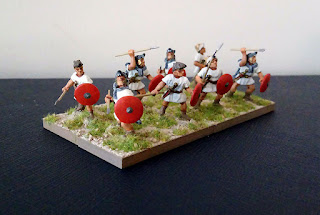 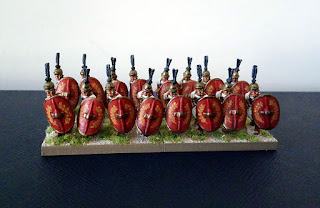 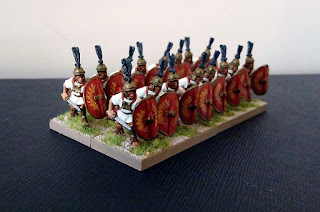 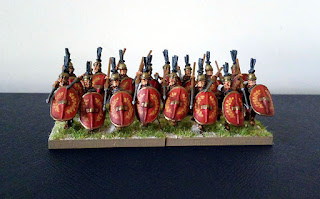 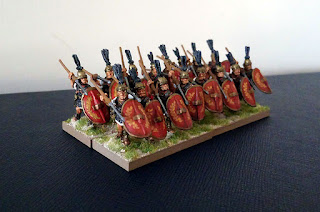 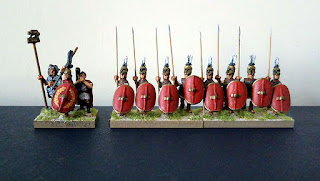 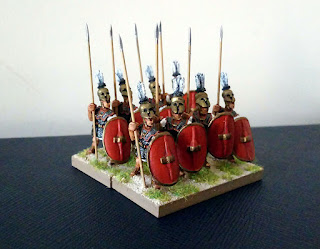 I don't really have much to post at the moment so I'll post my new Companion Cavalry just to keep this blog interesting and up to date. These are, yet again, 15mm Xyston figures. They're very nice but they took me bloody ages to get finished. There's no reason why, I just took my time. This is the first 6 base unit (18 figures) and I plan to do another unit as well as an "Alexander" command base (in case I decide to field my troops as Alexandrian sometime in the future). 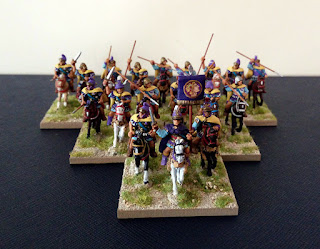 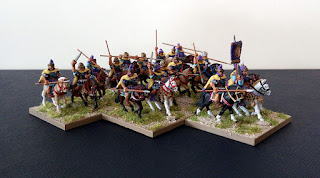 These took a bit longer than I had planned because I had a few interruptions along the way.

With the pike I do them 8 figures at a time (one packet or two bases) and each lot takes about two days. That's to clean, fix weapons/shields and paint them. So 32 figures should take 8 days but they took 11 days all up. I now have 5 syntagma of sarissa (blocks of pike) and one of long spear (dory) armed peltastoi.

I did the Cretan archers bit by bit (instead of concentrating on them) so I'm not sure how long they actually took to get done. This is my second unit of Cretans.

Anyway, here are two new units to add to my gathering Antigonids. I'm pretty happy with them as they look colourful and will look great on the table.

The sarissa are from Xyston with shield decals by Little Big Men Studios. The Cretan archers are by AB miniatures. 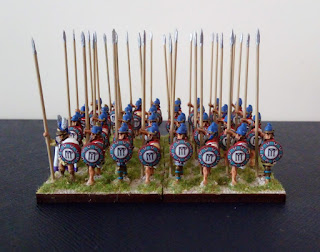 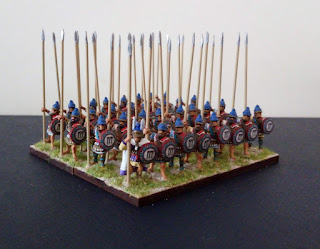 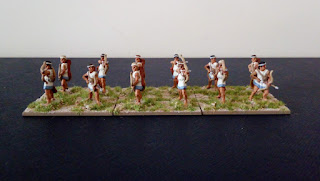 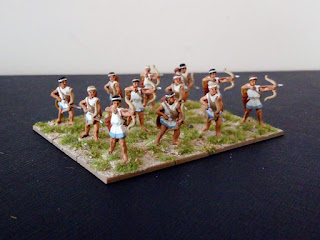