It took me a bit longer than I anticipated but I finally finished the second battalion of my French WSS force. Like the 1st Bourbon this battalion is part of Montmorency's Brigade at Blenhiem.

I like the colours of this battalion. The strange mix of blue cuffs, red gaiters and yellow hat lace makes them look very colourful. This contrasts well with their flag which is somewhat understated.

I'm not sure about the cuff colour. I looked at a lot of reference material and other models of this unit and the colour varied dramatically, from a light cobalt to a very dark blue (even a dark green bordering on black). I opted for a dark sky blue.

Again, I made the flags using photoshop.

I mounted them on the custom 60 x 50mm bases that we had made by Mike Parker.

The photos are taken in front of some card-stock buildings that I made a few weeks back, just before Christmas. For a dollar per pdf, paper and pages from a watercolour pad they make very nice 28mm terrain (they can be scaled to any figure size too). The most expensive part about these is the printer ink cartridges. 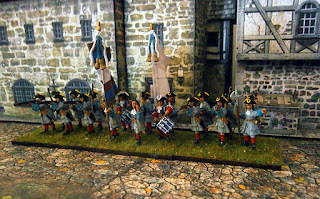 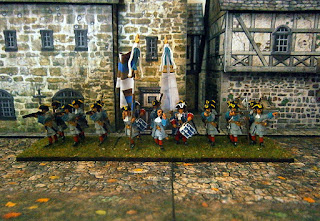 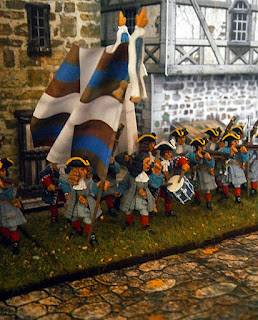 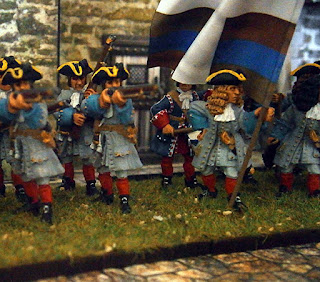 Well, I've started into my 2017 War of Spanish Succession project.

I'm going to make about 7 or 8 infantry regiments, 2 or 3 of cavalry, one dragoon regiment and a few guns. For "Lily Banners" that's about three commands and should be enough to get some decent games underway.

The figures are Ebor Miniatures and although they look quite nice they're not as easy to paint as Front Rank and they require quite a bit to effort to clean up mold lines. I hope that then next regiment I do are a better cast.

The flags were, again, made by me using photoshop. The flag finials are by by Front Rank, they top the whole thing off very nicely. 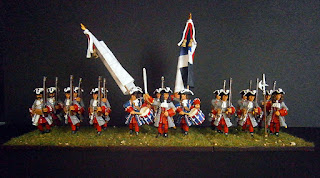 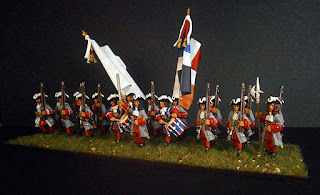 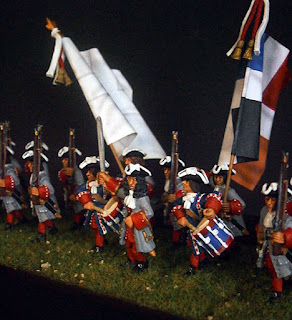 WWII ~ My Introduction to Wargaming

I decided to paint up some WWII stuff.

Like many folks of my era, I was introduced to wargaming and modelling via Airfix kits and plastic figures. These figures were HO/OO scale or, 1/72 or, as they are called today 20mm. I played a lot of WWII wargames in my youth and I had a very large collection of figures and vehicles of all nations. Unfortunately I sold them off a long while back for a variety of reasons and never played WWII again.

In getting back into WWII, I had options. This time around I can go for 15mm, 28mm, 18mm etc but I opted for good old 1/72 (20mm). To me this is the correct scale for WWII. There are loads of cheap figures available as well as a huge range of vehicle, AFV and aircraft kits.
One thing I really don't understand is WWII in 28mm. To me it just seems an expensive and limited option to take.

I like WWII wargaming at the tactical level using a 1:1 man/figure/vehicle ratio and I like games to be platoon or, at the most, company sized encounters. The rules I use to use are not appreciated by today's players so I've had to look for something new and as yet I haven't settled on anything. I might just be a stick in the mud and keep with what I like. Who knows?

So, I went out and bought some troops. A box of Germans and a box of G.I.'s. I thought a platoon of each would be a good starting point. I figured a platoon of each, with a couple of vehicles added should be able to provide some simple games as well as being good for testing out various sets of rules.

The figures I got are by Valiant Games. They are supposed to be 1/72 but they are actually a bit bigger. No worries though because I don't intend to buy many of them. Each box has a full platoon as well as heavy weapons so they are just what I want.

Anyhow, I painted up a platoon of G.I.'s first ~ 41 figures in three 12 man sections and a 5 man command team ~  and they took me about a week (due to Christmas festivities). I expect the Germans to take less than that when I get started. They are nice figures. I did a pretty basic paint job on them and they came up okay. They are based on washers because they're cheap and to give them some weight. 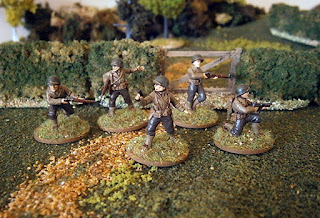 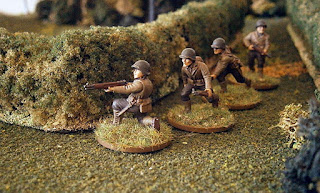 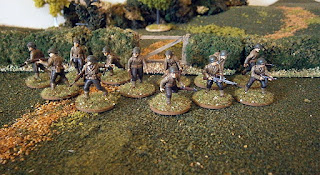 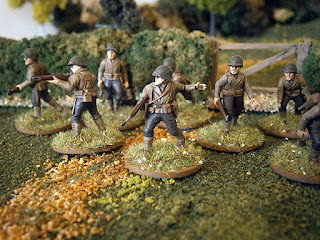 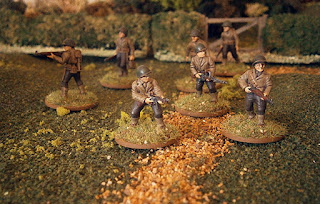