Once again those pesky  Forge Fathers got in my face last Friday. With their squeaky little dwarf voices they were whining about some sort of mining rights and it took my brave and resourceful Ganymede/Io Mining Pact Security Forces (GIMP SEC) led by Colonel Fank Phraxus to sort them out.

Another game against Brent at NWA. This time around we elevated the points to 1500 and Brent used a different type of battle group with none of those irritating Iron Ancestors (a mighty tough dwarf inside a mighty tough tin can) but lots of heavy shooting nonetheless.

The table was pretty barren with a few rocky outcrops and a bunch of stuff strewn around the place. I got to use several new pieces of terrain that I put together during the week - The green huts and dark grey things (see below). I suppose they could be venting shafts or some such thing. 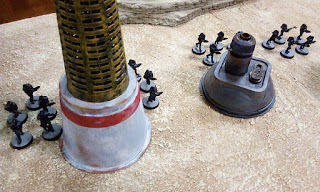 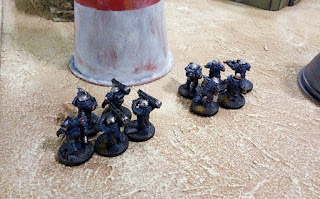 This thing looked dangerous.
What was it and what was I going to do about it? 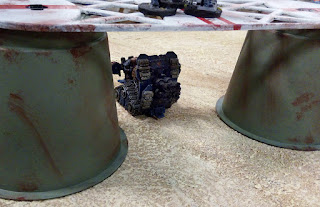 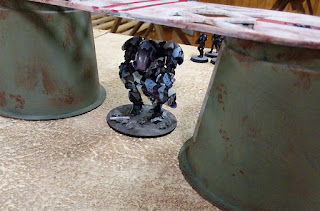 My heavy weapons located well back and with good lines of sight took aim, aided by Engineer Support (re-roll to hit)... and missed. Brent activated a squad of squat folk, aimed at my not-very-well-hidden Strider (above) and blew it to pieces. My mortars fired and did nothing at all. Their target - a squad armed with with missile launchers - took aim at a marine section and vaporized them in their entirety.

So far this was not a very auspicious start for GIMP SEC.

What to do? I decided to move fast and use cover. 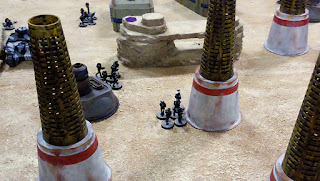 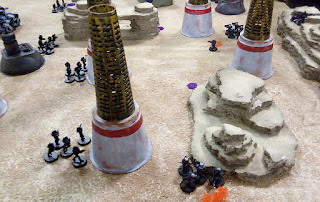 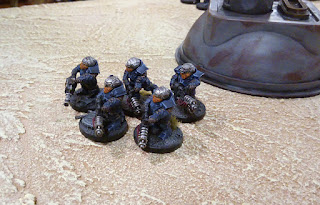 I managed to minimize further casualties for the time being by doing this and also managed to shoot up some of the Forge Father infantry. I tried to issue some orders but my Order Dice were just as bad as my shooting dice. Things just didn't seem to be going the way I had planned.

Then this thing moved out and became even scarier than it was when it was just sitting there. 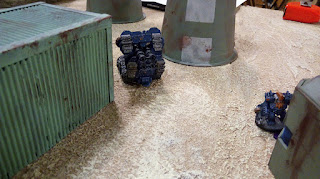 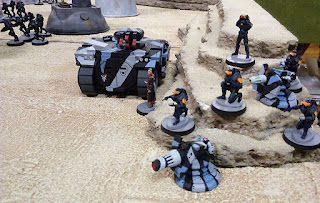 But luck was on my side for the first time and I managed to refresh my heavy weapons and get them in place to have a crack at The Thing. I had the first activation in the next turn and opened up with the heavy weapons. Both hit and reduced the thing to molten slag. So it wasn't a bad as I thought. But I'm sure if it had the chance to shoot it would have been nasty for GIMP SEC.

More moving and shooting with my brave lads getting the worst of it. Although I did manage to get some rounds on target and knock down some of those pesky runts.

The Dwarf Commander Moves Up

For some reason the Forge Father decided to lead from the front. I just thought he must be mad but there was a method behind Brent's madness. and it was to call in a squad of heavily armoured, flying short folk on the heads of my mortars, which were doing some decent work on distant targets.

However, the morta's put up a fairly good fight. 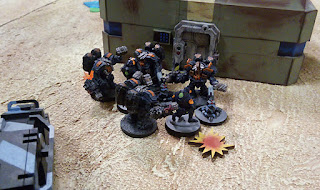 But the Dwarf lord was out in the open and the crew of my Mule Transport lined him up... 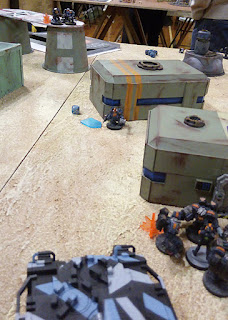 And drove forward full pelt to ram him into a building. And... 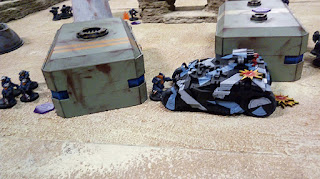 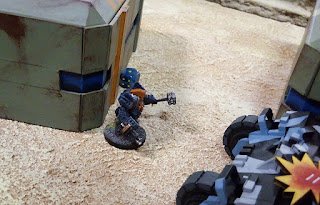 On the other side of the table my infantry were getting smashed. They did manage to take down a couple of enemy units but they couldn't stand against the heavy FF firepower. The Missile Launcher squad who wiped out my marines earlier also took out my transport after I pulled back but they got theirs when my own missile launcher obliterated them, turning them into little piles of stumpy arms and legs. My heavy weapons, in turn, took heavy auto cannon fire and severe casualties. 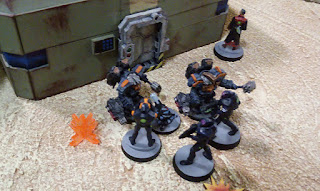 The mortars managed to hold out with the help of a veteran marine squad. I also managed to bring my new Ranger unit out of reserve (not pictured) and they took out a lone dwarf holding an objective.

In the photo below I advanced my last intact marine squad onto the rocky outcrop and took aim with their Thermal Rifle which was the only weapon capable of penetrating the Forge Father's armour. And penetrate it did. Burning a hole though his heavy armour, his valiant heart, and out the other side. 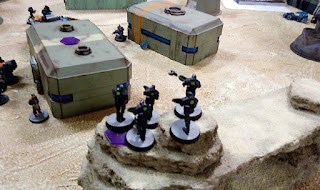 Somehow, I managed to win. the victory points were 8 to 7 against GIMP SEC but the death of the dwarf commander swung the points: 8 to 9. As it turned out, the majority of my casualties were cheap marine units which helped keep my losses to a manageable level. The Forge Father units, on the other hand tend to be expensive so casualties counted more. I also managed to achieve a couple of secondary objectives which also helped.

All in all, another great game. It moved fast and it's getting easier to remember various rules. All I need to do now is roll better dice.

So I bought my first batch of mdf terrain from Miniature Scenery and I made it.

Then came the chore of painting it so, I decided to break out the airbrush that has been sitting in it's box since I bought it about 18 months back. Two brushes and a compressor. I've only used an airbrush on a few rare occasions over 40 odd years and I had no clue as to what to do. So it was off to You Tube for me.

After watching several "Airbrushing for Dummies," videos I got to work. I was a bit clumsy with the first couple of pieces but by the time I got to the last piece (the power generator) I was pretty confident. 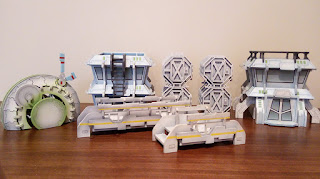 And here's a shot with Eric the Lonely Grenadier for scale comparison (28mm). 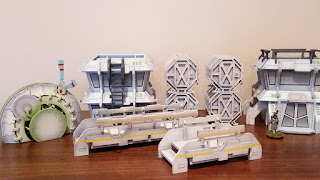 And yesterday I was driving past Knights of Dice and dropped in on Viv. While I was there I collected a couple of small landing pads. These will look nice on an elevated ground section when they're done. The Widgets are detail for some high rise buildings I'm planning to make using card & foamcore. 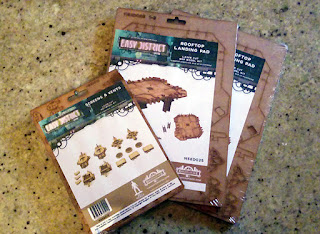 Yes, that's right, I live 5 minutes away from Miniature Scenery and about 10 minutes from Knights of Dice. Lucky me!

And while I'm at it here's a photo of my newly completed GCPS Rangers for Firefight. These are a type of drop-troops who can deploy on the battlefield from the air. They have a heavy anti-tank capability (just look at the big AT-mine!). 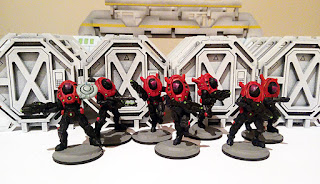 As you can see, I've been busy.

Well my terrain project to build a sci-fi table is underway. I've built the terrain I bought and now it's time to paint it. I've had an couple of airbrushes (and air compressor) sitting in a box for a long long time and I've decided to break them out to do the painting. Anything I use to know about airbrushing has vacated my head so I've been watching You Tube for beginners lessons. 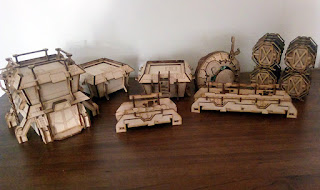 I also ordered a battle mat. I've never bought one of these before but I have seen plenty of them and played on a few. I'm thinking that I'll need quite a lot of terrain to fill this area up so I might make some scratch buildings instead of investing too much in mdf pieces. The mdf looks fantastic but the expense of them makes large quantities a bit of a hurdle. I'll be better able to work things out when I get the mat and eyeball it. 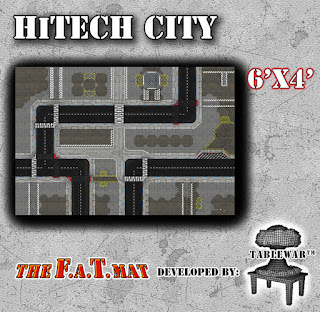 I played a game of SAGA last week against my friend Tom. Here is a late after action report: 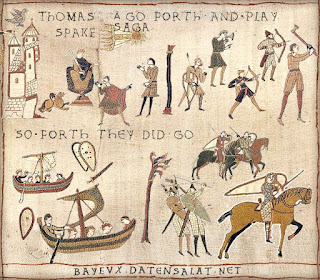 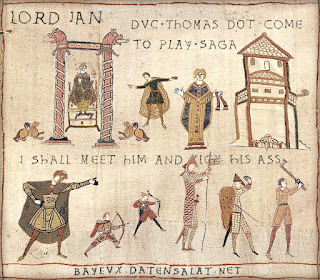 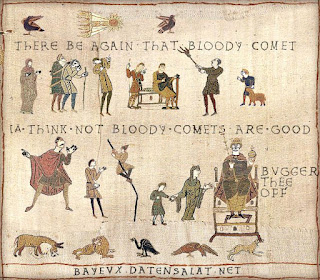 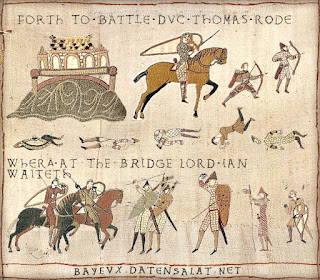 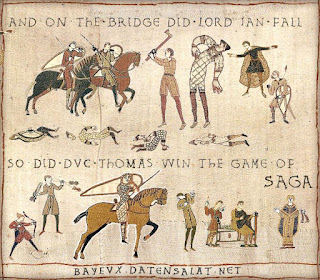 I'm still having a great time doing sci-fi stuff and finally got to use my GCPS in Firefight a couple of days ago and they performed okay (but lost the game).

However, I've decided to build a sci-fi town. I started, thinking that I'd make a nice clean "Star Trekesque" place with clean lines and a light colour scheme. But yesterday I took a trip the The House of War (a local store with a few dozen highly decorated tables) and saw some fantastic gritty looking dark and grimy tables that looked great. These tables used the same mdf terrain that I've decided to use and now I'm at loggerheads with myself as to which direction to take. Clean or gritty?

Anyhow, here's my first haul of buildings and other stuff: 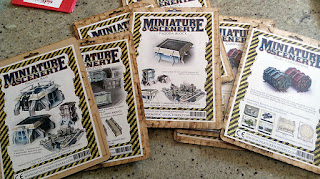 I was also given this set as a freebie from Tim at Miniature Scenery. Little doodads to give the table character. 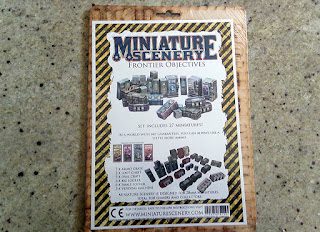