I picked up a box of the plastic Frostgrave Barbarians in the middle of the year. I put some together and undercoated them. They then sat on my desk until now. Last week I decided to get stuck into painting them. I was a bit daunted at having to paint a dozen at a time so I did them in groups of 3 or 4 and gave them a bit more attention that I've given to most of my other Frostgrave plastic figures. 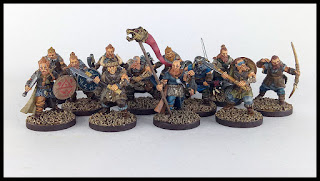 They're a pretty good set and they came out pretty nice. The only thing I would have liked is some more head options and another bow arm option. I trimmed and changed some of the beards to get a couple more different heads. I also added a couple of alternate shields and did a little bit of converting here and there.

The first lot: I like the spear guy and the shield. The hammer looks pretty dumb and I think I only made one figure carrying it (I still have more figures on the painting table). The archer is a good looking figure. 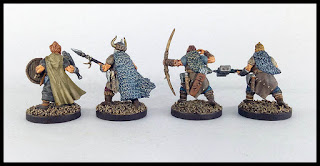 Lot #2: A bit more work on this lot. Most notable is the standard bearer. The draco comes from the Goth Cavalry set I used to make my elfin cavalry. The head he's holding is from an old box of Warlord Celts. It's been in my bits-box for a few years and was quite brittle. His sword is from the Fireforge Undead Cavalry box.

The figure with the axe reminds me very much of Conan from the Schwarzenegger movie. 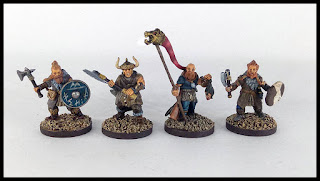 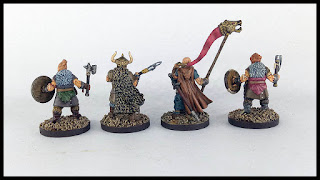 The last batch: Nothing special here. Once again I like the spear guy. The spear arms fit really well with the torso and just look really good. Overall, they came out pretty nice and I'm really happy with them. 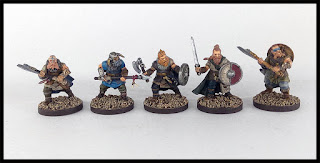 ~~~~~~~~~~~~~~~~~~~~~~~~~~~~~~~~~~~~~~~~~~~~
Once again: I don't enjoy using Blogger any more. Just trying to post the 7 images in this post proved to be a hassle. I'd like to do more battle reports but I don't think it will work. The images will post out of sequence and then it will be impossible to change their position. Because I usually use a few dozen pics when doing battle reports it will take a day or two to do them all individually and align them with the text and I just don't have the will or commitment to put that much effort into a single post. I do this for fun and it's not much fun any more.
Thanks Blogger.
Posted by IanKH at 16:29 5 comments:

It's been a while since I last posted anything. I was painting 15mm ancient Iberians but I lost a bit of interest. I'm not surprised considering how long they took to get from the UK to Australia. The amount of time sapped my enthusiasm considerably.

Instead I've been doing more Oathmark Elves ~ Again ~ I also did a fair bit of re-basing. 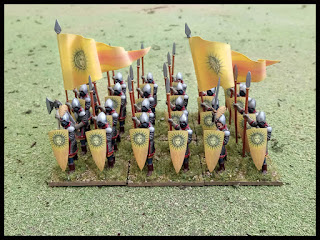 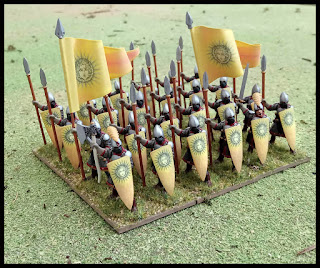 This time I wanted to avoid the "standard" blue, white, green, grey elfin colour schemes. I wanted something brighter with a bit more visual impact. So I opted to give them darker mail topped with shining polished armour. This included turning the chest-symbol thing on the figures into a solid metal breastplate. I just used a bit of greenstuff and smoothed it over.

I also wanted to give them bright panoply to offset the darker overall colouring. In this case I decided on a sun motif with bright yellow and orange. This ties in well with the yellow and red colours of their uniforms.

I had a think about what I wanted to do with all the elves and goblins I've been painting throughout the year and I decided I want to play big battles with them. So I decided that having them based individually was a bit awkward and made large formations difficult. So I re-based them all. It took a while. Here are some pics of the converted cavalry figures I did last month. I made 4 more figures to bring them up to 12 and re-based them onto 50x50mm bases. 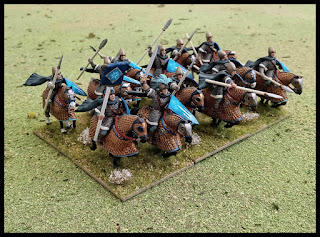 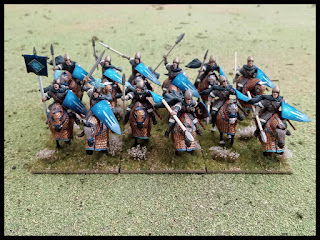 Another reason for not posting for a while is because I really dislike the modifications (upgrade?) that were made to the Blogger interface. It's now awkward to use and it's not as intuitive as it was. I don't really like working on Blogger anymore and I'm considering ending this blog. I would prefer to keep it going but I don't enjoy doing it any more because of the changes.

I would like to migrate the blog elsewhere but I'm not sure what to do. Any advice would be welcome.