I decided a couple of months back that my project for 2017 is going to be The War of Spanish Succession. I was going to do the Seven Years War but a friend convinced me to go for something closer to the Golden Age of Piracy.  And after a bit of a research into the era and looking at uniforms etc, I was convinced.

Then there was also the fantastically presented Beneath the Lily Banners by The League of Augsburg which also went a long way to sway my feeble & easily influenced mind. All those beautiful figures and colourful flags. What more can a wargamer ask for?

So, I've been hitting up Ebor Miniatures pretty hard for their excellent value, regimental deals. Lovely figures and I can't wait to get stuck into them in the new year. I've also collected some Front Rank to supplement the Ebor chaps. And, being a bit of a Francophile, I decided to go with a French army but I can see that I'll, more than likely, move onto other nations some time in the future.

Actually getting prepared for a project is something new for me, as I usually just go full-steam-ahead on whatever comes along. I'll be interested to see how I go with a bit more structure and pre-planning.

I've also decided to collect my troops in line with the Battle of Blenheim as there seems to be a goodly amount of information available on uniforms & organisation as well as there being a fair few nations/armies involved.

Anyway, because I have to do "something", and I'm being very patient with my desire to drop everything else and immediately start painting figures, I decided to start doing flags. So, I created a nice big photoshop working file that I can chop and change to create all the flags I'll ever need (I hope). I can see that some of these are going to be a challenge (the Dauphin's flag for instance) but I'll tackle them as I need them.

Here are some that I've done so far. These are low quality jpegs and I don't know if they're any good for printing. I save them as full sized pdfs for printing. If you want them, leave a comment and I'll send them on to you. 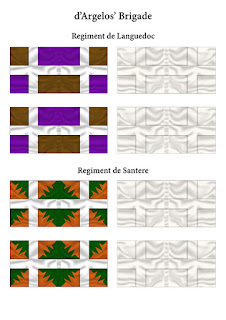 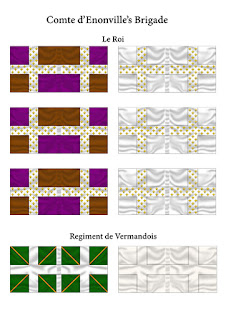 This is what I'm going to start with when the painting begins.
Apart from the colourful flags, there is a suburb close to me named Montmorency (where I use to live many years ago). 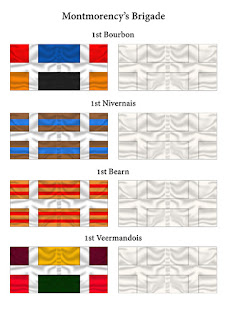 This one is one of the first pages I made before I decided to organise them into brigades. 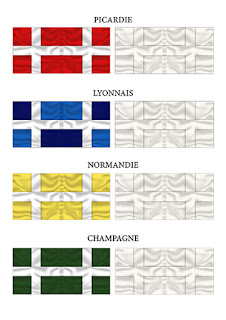 My idea to use a bunch of ECW standard bearers with detachable flags is starting to come together (so sang The Beatles).

I have a bunch of flags printed, cut and attached to staves. Many of them still require the edges done and some waves added. I don't want to make them too wavy because I want the dots on them to be clear to all players. I don't know what the flags with a flame/ribbon/tail will signify at this stage.

So far I only have three standard bearer figures to use as tokens but more are on the way. I've also mounted a bunch of spare musicians in individual round bases (drummers and fifers). I'm not sure what to do with these yet but they nice to use as "Disordered" markers or whatever. They don't look disordered but just the fact of a sole figure on a round base might suffice for the purpose.

Anyway, here's some trial pics of what I'm hoping to achieve. The flags can be downloaded from my previous post from a couple of weeks ago. 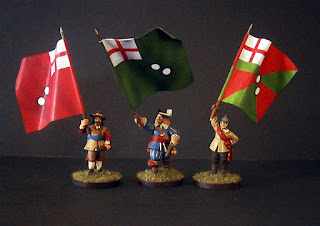 You can see a bit of the wire flagpole sticking out the bottom of tube on the left hand guy. 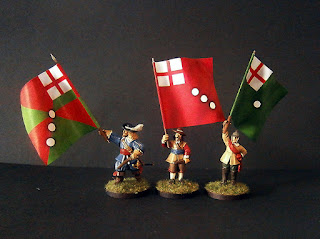 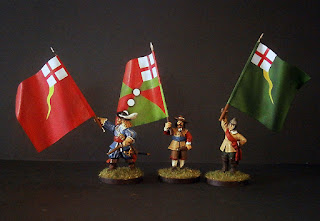 Battle of the Ruperts

I had a small introduction to ECW game yesterday. My friend, Robin. who bought the Royalist Army that I turned down (see previous post) has never played ECW so I took him through a game of Pike & Shotte so he could get his lovely new troops onto the table.

We're planning a large game in the near future and this game was to get Robin familiar with the P&S rules. I'm not 100% familiar with these rules as I don't play them often enough. Luckily Tom, who has played P&S a bit more than I, tuned up and helped out with rule clarifications in a few places.

We had a good game and sorted things out as we went along. It also gave me the opportunity to get a few photos of some of the new additions to my army - including my new Rupert!

Note: The Pretender Rupert in the background! 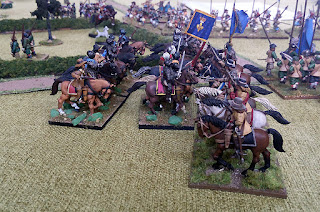 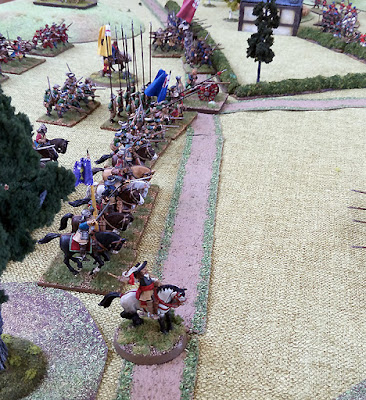 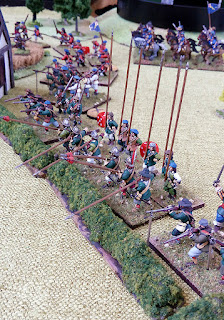 The true Prince Rupert (mine one) 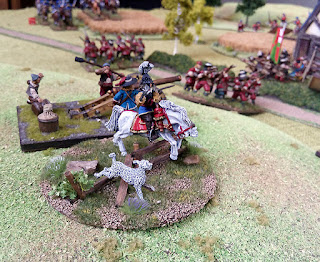 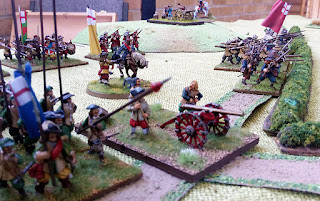 We had a nice little dragoon skirmish amongst the wheat fields on the flank. 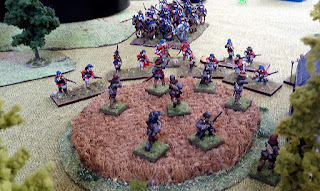 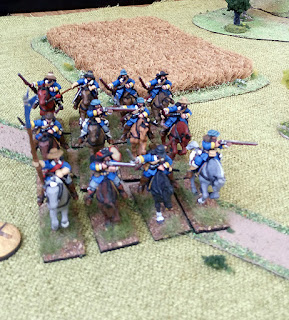 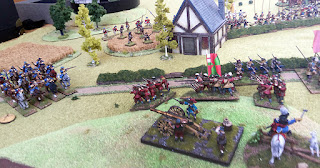 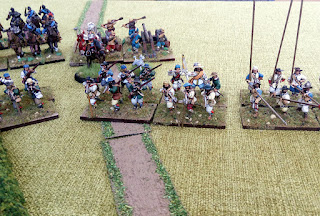 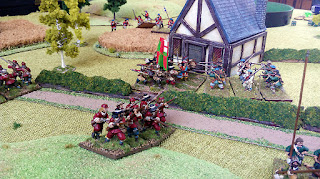 I've been getting back into the ECW for the past couple of weeks. This happened because I had the opportunity to buy a big bunch of figures all painted very nicely (better than I would have done). However, I turned down the offer for a couple of reasons. One of these reasons was the price which I always have trouble coming to terms with. I always think, "I can do that, so why pay a lot of money for it."

But my interest was piqued and I decided to just bite the bullet and paint up the unpainted troops I already have languishing in boxes & gathering dust.

I'm quite handy with photoshop and I like to use it for designing all sorts of things. And one of those things is flags. Whilst painting my new Royalist recruits I decided to embark upon a cunning plan that I devised a while ago.

I usually give each pike block a single flag. I usually record casualties by placing a dice (nothing new there). But, what if I paint up a bunch of guys with a hollow tube in their hand where I can place various flags with dots & things to represent casualties?

Instead of ugly dice, nice looking figures with flags will take their place. What looks better than more flags and less dice, I ask you?

So I designed a bunch of flags. They're pretty basic so they can be used for either Royalist or Parliament. And because I'm a nice chap I decided to share them with you. I'm not sure if these jpegs will be any good (I saved them as pdf's for my own printing). If they're no good drop me a comment along with your email address and I'll send you the pdfs.

I ordered a packet of 40 metal pikes to use as flag poles and cut them in half to double the amount.

Anyway, here they are. 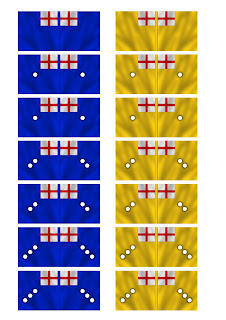 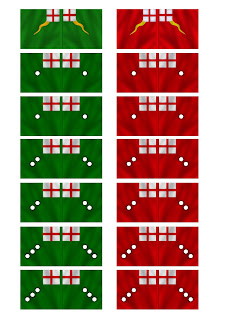 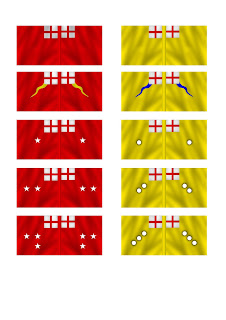 This green & red one is Sir Henry Vaughn's Company of Foote
and I'm unsure if any other regiments used this design. 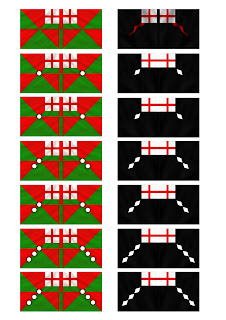 I'm thinking that these flags with flames could be used to mark
other stuff like disorder or charging or whatever. 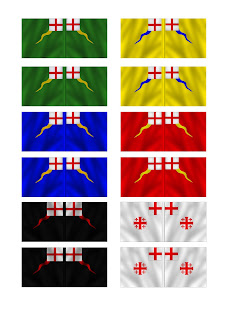 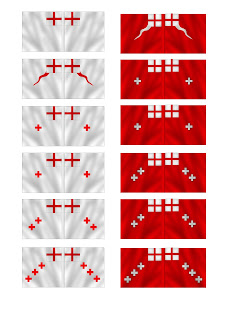 And some other ones: 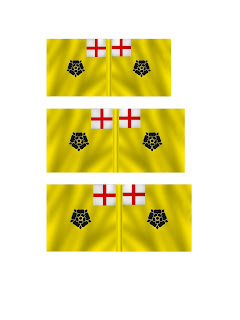 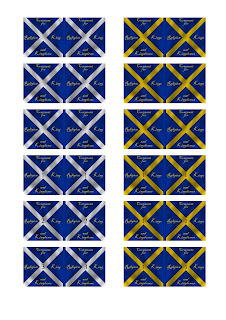