A variety of Recent Stuff

Well, I decided to get some of my lead mountain painted over the past few days. I decided to do some Pulp and Geezer figures because I'm going to want to use these guys soon. I also painted a bunch of zombies but I'll get some pics of them when I get more of them painted. I did a pretty rough job on them so that they would have that disheveled, walking dead look. I'm not very fond of nice neat zombies. While they look good they look nice to me they appear a bit too tidy for the recently risen.

Anyway here are some of the pulps that I've just finished. The chunky lady in red looks very much like my next door neighbor (same attitude too). 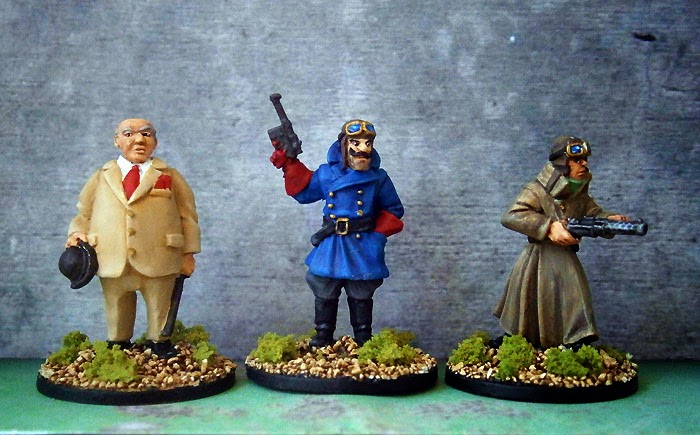 I really like these two. They are from Eureka Miniatures and even though they lack the detail of the others they have a great moronic look to them. I'm calling them the Piranha Brothers - Doug and Dinsdale. 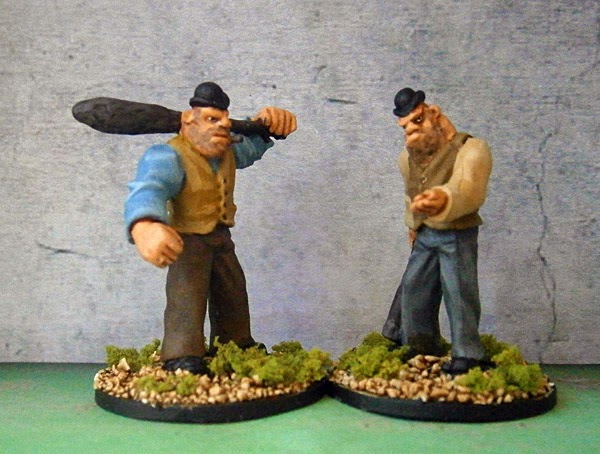 And as I mentioned, I also painted up some Geezers. I still have some uniformed Old Bill on the painting table but so far I've done a Flying Squad and a bunch of Blaggers. Cheers.

Put yer trousers on. You're nicked! 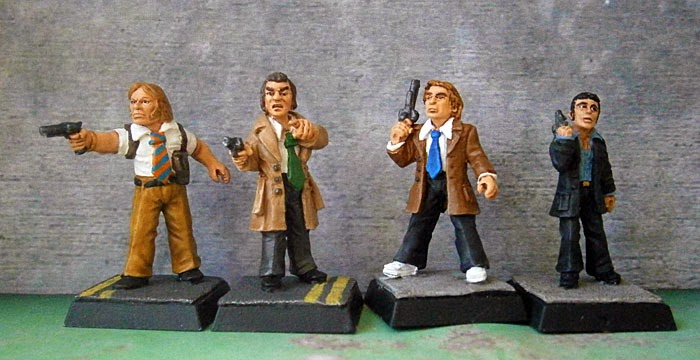 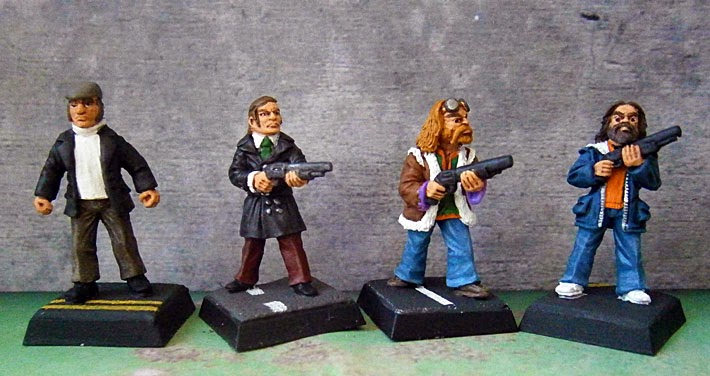 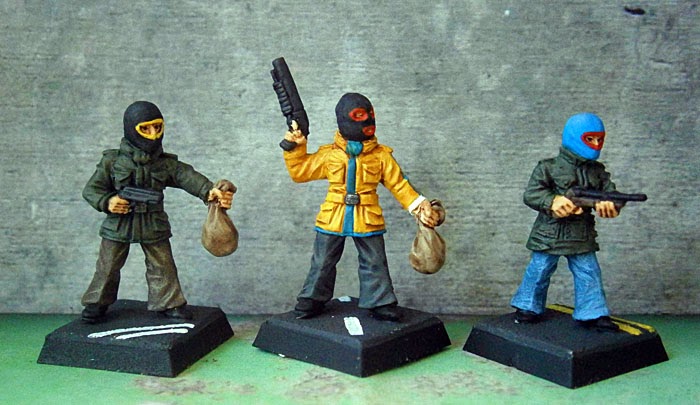 A Shady Meeting in Pulp Alley

I've been looking for a good set of rules for wargaming in the Pulp era for quite a while now and I've been lucky enough to be invited to try out the Pulp Alley rules by the authors: David Phipps. These rules are still in the play-testing stage but I have to say: I'm really impressed.

Players create a league with a leader and an array of  lesser characters including sidekicks, allies and followers. The mechanic is goal based with a striking difference - The use of polyhedral dice! The leader is obviously the most powerful character in the league and uses d10's and d8's. They also have the best skills. The remaining members have skills and dice in accordance to their ranking with the poor followers get the worst of this deal.

When creating a league you don't have to rely on counting points. Instead the game uses a roster system which can be chopped and changed in between games if you are playing a campaign. The only constant is your leader.

There is, of course, much more to the rules including the use of a Fortune Deck which throws interesting and events at the characters and looks to add great random elements and situations for characters to overcome.

I've yet to play a game of Pulp Alley but I'm planning on some games to get some old friends back into gaming during the summer break (here in Australia) . I wish I had these rules when I was designing my King Kong game. I ended up having to cobble together a set of rules because I couldn't find anything suitable (and having said this I'm not about to change anything now. Because I've designed everything to suit the game). However, I'm pretty confident that Pulp Alley will take the place of '#1 Pulp Rule Set' in my library.

And... I have the reason I needed to start sculpting my own set of pulp figures and making that tramp steamer that I've been planning...

Email ThisBlogThis!Share to TwitterShare to FacebookShare to Pinterest
Labels: Pulp

Well, I've almost finished the terrain for my Kong game. I just need to make a bit more foliage and one or two more trees. I'm also making a few rock outcrops because I need to fill in the front half of the boards and make that area look a bit more rugged.

Anyway, here are some pics taken in my garage.