Preparing for the Siege pt9

I've finished both armies. After longer that I expected, due to real life getting in the way, I've got both the armies of Demetrius's and Rhodes fully painted, based and ready. There's just one item I need to create: The Helepolis.

The Taker of Cities. The massive siege tower that was gigantic even by the gigantic standards of the Diodochi. 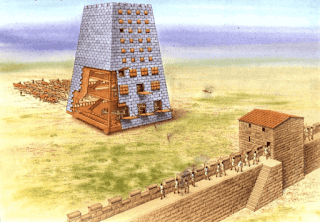 I've been prevaricating as to weather I should include it or not, but I think that the game demands it. After all it's one of the things that makes this siege stand out against the rest.

Anyway, I finished the troops.

The army of Demetrius consists of heavy infantry, peltasts, marines, skirmishing archers & formed archers - 39 bases in all. It also includes 4 heavy sone throwers, 9 scaling ladders, two normal siege towers and 3 rams (only one pictured - but I'm unsure how many I'll need).
Each base represents about 500 men, so all up it comes to about 20,000 for the assault. And if you were to include the navy... around 40,000. 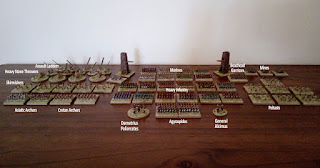 Heavy infantry with Argyraspides (Silver Shields) to the front. 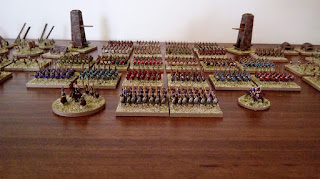 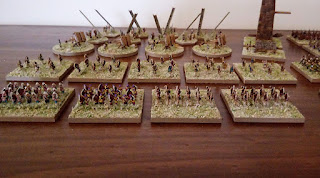 Peltasts with mining penthouses at the back. 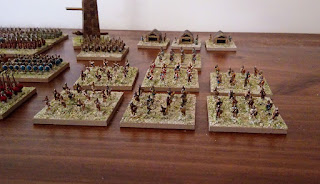 This is a much smaller army which includes quite a few light troops. It includes Rhodian slingers, light infantry, militia and marines. As allies we have 1500 veterans sent by Ptolemy as well as heavy infantry and javelins from Cassander and Lysimachus.

I decided not to include any archers for these guys because in the rules each tower counts as housing a missile armed garrison. So that's where their archers are located. 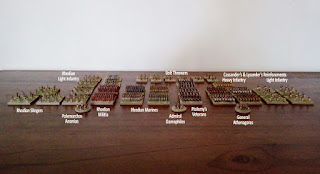 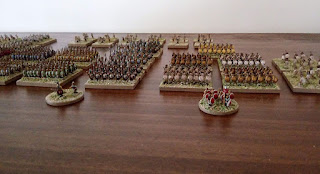 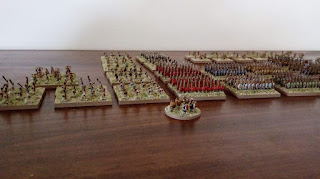 Marines in the center with the militia on the left. 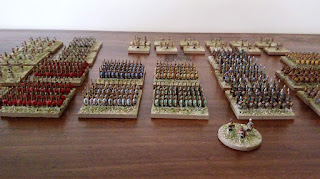 Now that I've finished these and set them out I'm thinking that I might rebase the Cretan archers to make them skirmisher bases. That will enable me to make up an extra base too, for a nice even 40. A short half-hour job.

Edit: I did it. I now have three bases of Cretan Archers in skirmish formation. Making an even 40 bases for Demetrius.

Preparing for the Siege pt8

I've been busy with real life for the past few weeks so I haven't had time to post anything new. But I have been painting troops, albeit slowly.

So I've been painting and the armies have been growing but I really had no idea how many troops I had and how many more I might need. Today I had some time and I decided to set the city up and lay out the troops to get my bearings. I also needed to see if I have enough buildings.

All is looking good but I need more troops. On the Macedonian side I need a bit more of everything as well as half a dozen units of marines for the seaward side of the table. I also need to get the larger siege engines built. For Rhodes I need more hoplites, light infantry and marines.

If you're wondering what the marines look like, they are just hoplite armed infantry. I guess I'll have to paint their shields blue or something.

It was also good to set the city up again in order to work out some sort of set up plan. I couldn't really remember how I set it up last time but trial and error and I eventually got it. Sort of. As it is I just gave the different pieces a letter (A - H), took a photo and annotated it.

Another thing I need to do is make the acropolis. I got some small resin buildings from Brigade Models. A temple and theater. They are smaller in scale than the card buildings but the acropolis will be a standalone terrain piece. So a bit of forced perspective will be the order of the day.

Anyway, here's a few photo's of the troops as they stand at the present. 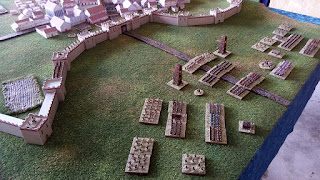 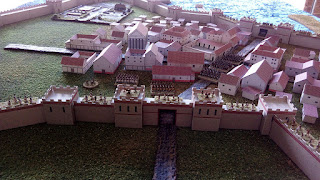 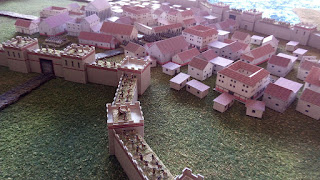 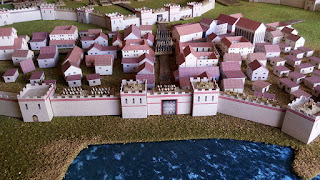