Mat Work for To The Strongest

I took out my grassland gaming mat and decided to mark out a grid for To The Strongest.

I made this mat in 2016 for a 950 year anniversary game of the Battle of Hastings. It's made of a sheet of canvass with a covering of brown caulk and a load of home-made flock. It's pretty durable and quite nice.

I marked out the grid using a long piece of timber with 100mm intervals marked on it. The timber itself is also 100mm wide so it was just a matter of lining it up making a dot on the mat then lining up the timber over and over again. I used a blue sharpie for the dot.

I decided on a 100mm grid because my Macedonian pike units are 80mm wide as are most of my other ancient units. Also my Romans (after basing, re-basing and re-basing again) are now back to 4 figures on a 40mm base because of the mechanics of To The Strongest this will allow me to deploy them in a proper triplex acies formation. I couldn't turn up that opportunity!

I'm pretty happy with the result. The grid can be easily identified but it's very unobtrusive. Other little bits of flock that have stuck to the mat over time help to break up the grid pattern.

Surprisingly the grid is much clearer in these pics than in real life. 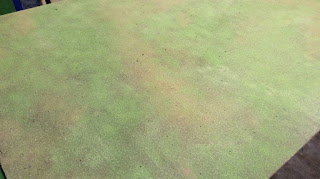 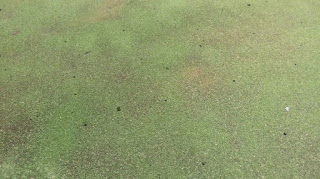 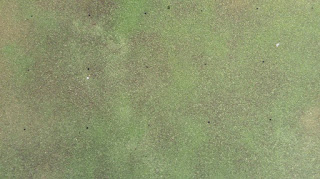 Email ThisBlogThis!Share to TwitterShare to FacebookShare to Pinterest
Labels: Terrain, To The Strongest

After a short wait the figures for my second Roman Legion arrived. I took pains to decide on a colour scheme and settled on the one below. I like the shields but I'm not totally happy with the madder coloured tunics. It actually looks okay on the principes but is a bit over powering on the hastati. But I made my choice and I'm going to stick with it.

I also got a general. I already had the other figures on the general's base in my stash of gifted figures.

For better or worse... Here they are:

All figures are Xyston with decals from Little Big Men Studio 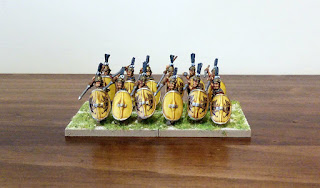 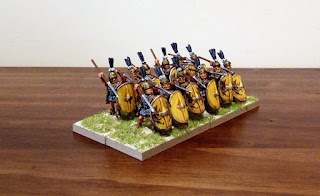 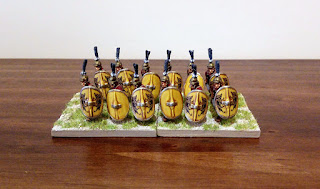 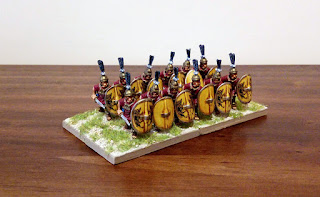 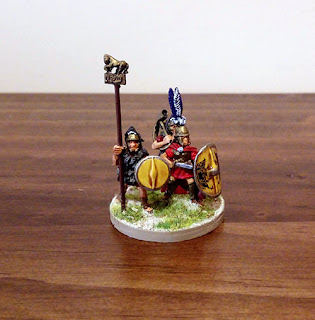 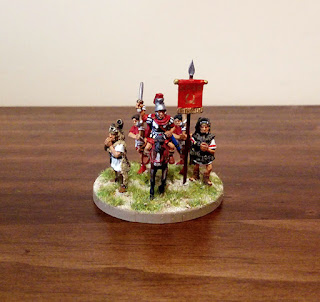 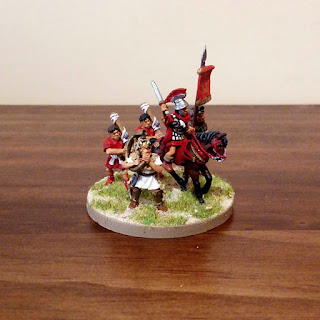 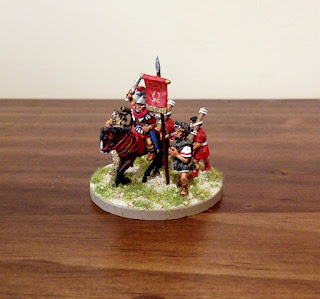 I did the equites to round off my tiny Roman Legion and started on some Italian allies.

The cavalry were enjoyable to paint and I think they look great. I was going to do just these four bases for my entire Roman cavalry but I might do another four bases to go with my second legion. The figures are, once again, from Xyston.

The Socii (Italian Allies) are actually Xyston Oscans. I had these sitting around amongst a bunch of 15mm figures that I was given a few years back. I was going to do Iberians as allies but decided to save some money and commit to Italians instead. I have more on order - heavy/medium infantry & cavalry - to go with these guys.

I'm not really sure if these should be light infantry or what, but I decided to make them light. I have enough to make another two bases but decided to keep them at the same strength as the Roman velite that I've already done. They were nice and easy to paint.

As far as these socii are concerned, I have no idea how they should look or how to paint them. I think that their helmets and shields may be wrong for the era so I decided to make their shields look a bit more plane & uniform to make them seem more organised. I'm really quite confused about them because I'm finding it hard to find any decent pictorial references. Should I just use Roman figures for Italians?

If nothing else: I can always put them alongside some phalangites and hoplites as part of a Pyrrhic army.

Anyway, here they are: 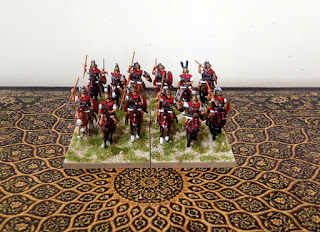 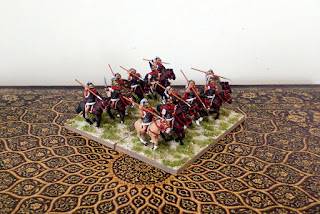 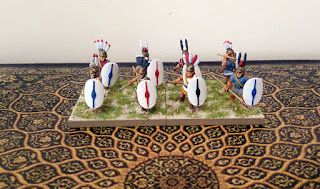 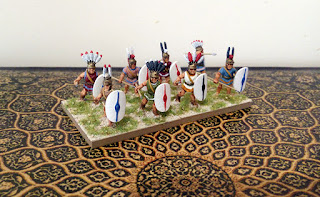