I re-based some peltasts and some slingers to go with my ancient Greeks. The slingers should also work with my Macedonians but I doubt if the peltasts will (though I probably wont need them for that purpose). 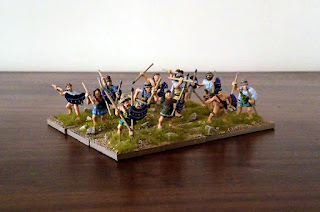 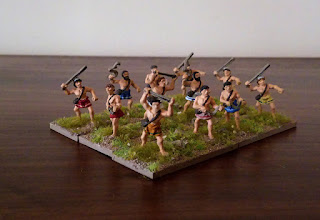 I also came up with a simple solution for adding markers to our ancient naval games. A clear base with a brass rod for adding coloured beads. Although I could also add a rod to the actual base of the ship too.  For the purpose of scale; the brass rod is about 20mm tall. 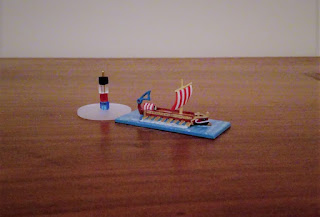 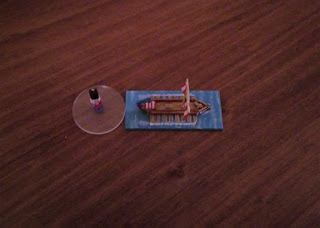 Well, I decided to re-base my Ancient Greeks to bring them into line with most popular rules sets. I originally had them as 6 figures to a 40x40mm base. Even though this didn't look as compact as hoplite infantry should be, it did show off the paint work a bit better. But, after seeing my Macedonians in closer formation I thought my Greeks could benefit from re-basing too.

I also wanted to be able to use some of my hoplites as possible Greek Mercenaries along with my phalangites if needs be. So I thought it would be better to have them on similar bases. So I did this horrible time consuming and wasteful task.

Now I did have two armies - Athenian & Spartan, but after re-basing I lost about 25% of my units so I now have one large Greek phalanx. It looks like I'll have to add a few more tiny fellows to bring their numbers back up to scratch.

Another reason for re-basing them was so that I can use them for Mortem et Glorium which requires more bases for individual phalanx type units. But they can still be used for most other rules too.

Now I just have to re-base my light infantry. These should prove to be a lot easier and I'll end up with more units because I based them differently to most rules requirements. Should I also re-base my cavalry? The 40x40mm bases do look a bit too deep but if I do... That's for another day!


As is tradition: Spartans on the right... 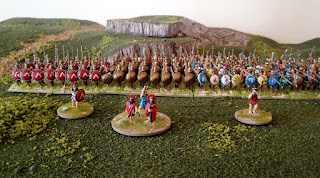 ... and the Athenians in the center and left.

Now, with all of that said and done, I've also finished a couple of other things. Some Macedonian light infantry and a piece of scenery. The figures are once again from Xyston with shield transfers from Little Big Men Studios. The temple is from the Forged in Battle range. 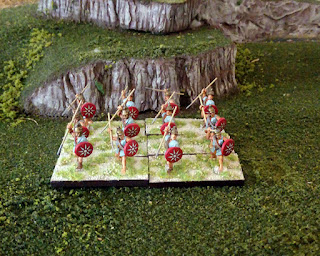 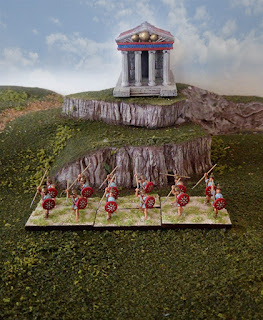 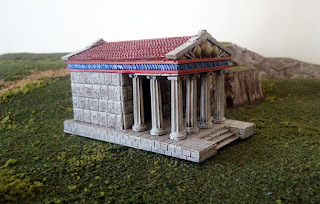 My Diadochi So Far...

I thought I'd take some nice photos of my Antigonid Successors now that I have a semi-respectable phalanx. I still need a lot more more cavalry and I'll add at least one more elephant (see previous post). I also have a lot of light infantry/javelins to add too. I have plenty of figures waiting and I doubt that I'll have to buy many more, if any.

The majority of the figures are Xyston. The only exceptions are the elephant (Forged in Battle) and Cretan archers which are from AB. Shield transfers are from Little Big Men Studios.

First of all are my newest phalangites: 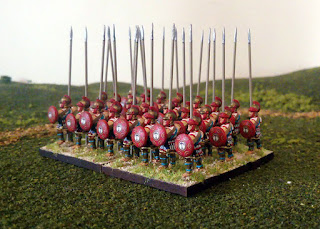 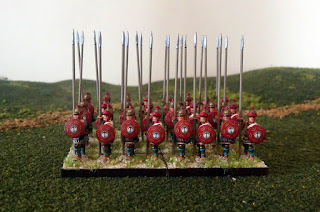 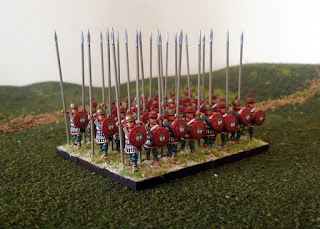 The phalanx consists of Agaema, Peltasoi, Chalkespides/Leukaspides (I can't really work out what the difference between the chalk's & the leuk's is supposed to be other than shield colour). 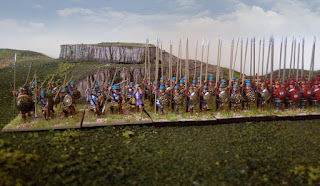 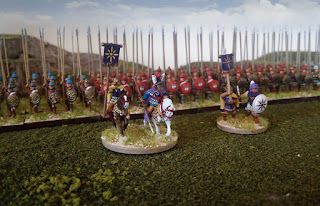 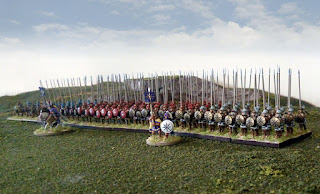 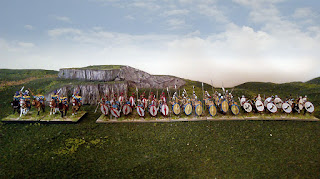 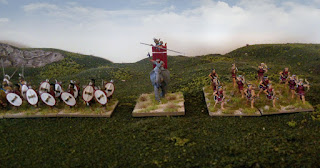 And my little cavalry wing. I can always use my Greek and Thessalonian cavalry for the time being until I get more done. I was actually planning to do the 3rd battalion of Lutzow infantry next but I might actually do another couple of bases for these chaps before I go back to that. 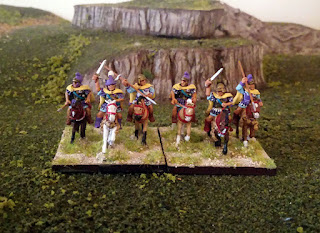 So there they are. I'll be adding another peltastoi and another regular pike unit and I have more thureophoroi & Thracians. As mentioned above I also have enough light infantry/javelins to add two or three units.

I've Got a Little Pachyderm

I'm still on a hiatus from painting Napoleonic's and still painting Diadochi. I've almost finished another unit of pike and I'll put what I have together for some photos tomorrow. But I'm still nowhere near finished them.

Anyhow, along all the other Macedonians I have sitting on my desk, I also have a couple of elephants from Forged in Battle (Westwind Productions I think). There were two in the box and I decided to make one of them. I've never painted an elephant before. 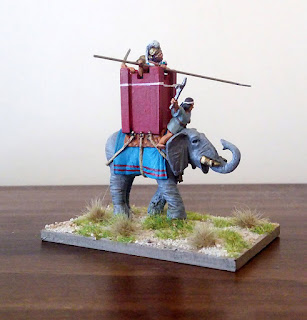 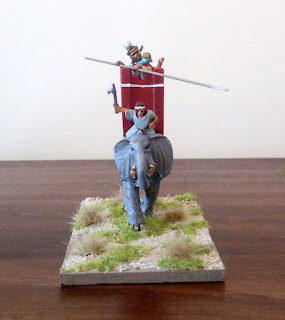 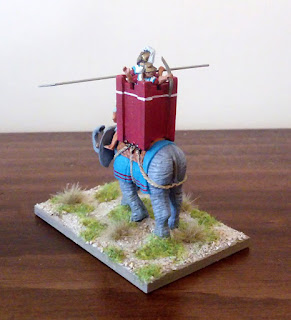 I've taken a rest from painting Napoleonic battalions and regiments while I await delivery of the rest of my Lutzow infantry. So I've been painting Macedonian phalangites as well as rebasing the ones I've already completed. I'll post more about these troops later.

I also decided to paint a few little figures that have been sitting on my desk for a while.

The dragoon is a plastic Perry chap and he's been sitting on my desk, undercoated with an ink wash, for a couple of  years. I have no need for him but I just decided to bring him to life. He's a nice figure and I think he's from the 19th regiment (not really sure).

The vivandière is from Eureka and she's been on my desk for as long as the dragoon. But her customer came with some Warlords French line infantry that I bought a couple of weeks back.

These figures have no real game use... I suppose I could use the vivandière vignette as a Reserve Order token in General d'Armee. 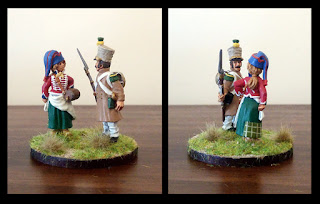 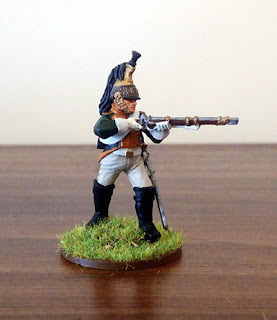 A quick post just for the sake of posting something.

I've been busy. I finished the second battalion of Lutzow's Freikorps but it's useless posting any photo's because it looks just like the previous one. I'm also waiting on a few more figures to arrive so I can get stuck into the third battalion because I didn't order enough to start with.

I've also finished some thureophoroi for my ancient Macedonians that have been sitting on my table since I got distracted by Napoleonic's (again).

This guy has also been sitting on my table for a long time. He's taken me a long time to paint mainly because I'd just add a bit every now and again. But he's finally finished and ready to lead my French cavalry in our next battle - Probably against me!

This figure is from Front Rank and is on the very large scale of 28mm. But he's a good looking figure. 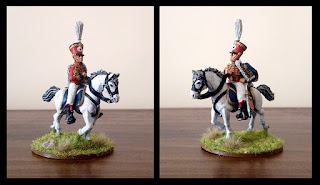