Had my first game of IHMN last night at Nunawading Wargames Club. My friend Richard and I decided to give the rules a test run. His Society of Thule v's Mrs Slocombe and her Girls. I got to use my long abandoned Victorian board and terrain which was good. It's a pin in the rump to cart around and set up but it looks nice.

After a second (& third) reading the rules seemed pretty straight forward and took us only a couple of turns to get things running pretty smoothly. We still had to refer to the book throughout the night but by the end of the game reference became less of an issue. I can see that after a couple of games you would hardly have to look anything up. Overall we were pretty happy with the outcome.

For the sake of learning the basics we just had a general bash and here are some pics.

The Scene: The docks in a Old London Town... 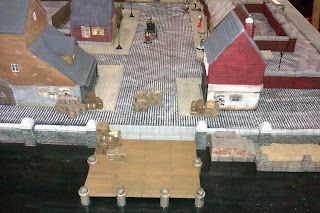 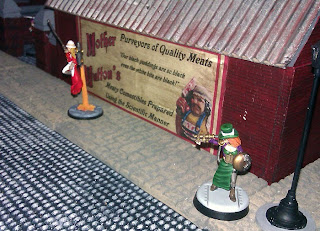 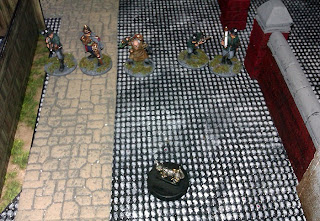 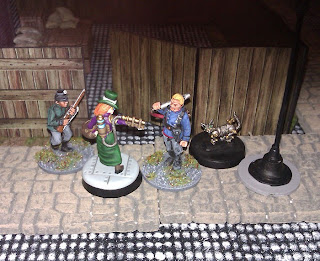 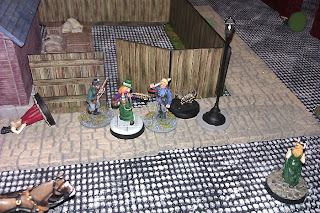 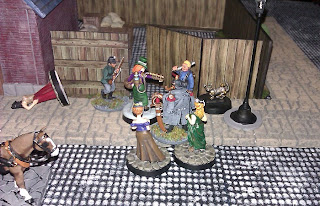 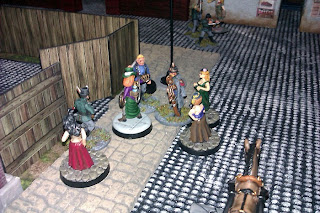 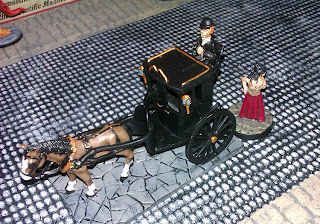 Some highlights were when Mrs Slocombe's Mechanical Pussy detonated it's electro-magnetic device. What a great thing it was too (but I was silly enough to follow it into the fray and more of my ladies got knocked down than the Prussians. I remember that next time!). One of my Unfortunate Women managed to bash in the skull of one of the Prussian Jagers and he go back up in Zombie form. Another has his head knocked with a wrench and did the same.

At the end it degenerated into a general barney with everyone jumping in Boots and all.
Posted by IanKH at 18:34 2 comments:

Finally - In Her Majesty's Name

I've had a copy of IHMN for a while now but I've failed to do anything with it. I bought a set of the Dragon Tong figures but I've only just started to paint them. However, just starting to put paint to metal got me to look once again at the rule book and I decided to create my own company with figures that I already have.
and here is what I came up with:

Mrs Slocombe’s Finishing School for Wayward Young Women is a private institution for the betterment of young ladies of class as well as tending to the succour of unfortunate women of lesser standing. Instead of allaying their wayward ways Mrs Slocombe, instead, harnesses the innate rebellious nature of her pupils for the betterment of Queen, Country and Empire. Through training, guidance and firm discipline Mrs Slocombe’s Ladies are able to go tête à tête with the toughest Adventuring Companies of the modern era.

Mrs Slocombe, the widow of Sir Harold Slocombe, is the dowager of her husbands’ substantial fortune. Seeing the Empires’ need in these times of tumult, she concluded that the Empire’s womenfolk were not playing as active a part in the defence of the realm as they could. Therefore, the Slocombe Finishing School for Wayward Young Women was founded as a means to mobilise the Daughters of the Empire. Her pupils are educated in bartitsu, marksmanship, medicine, engineering and the sciences.

Knowing a sizable commodity when she sees one Mrs Slocombe also opened a hospice for the unfortunate women of London’s streets. All women of lowly means are welcome at these premises and, although they are not obliged, many are willing to aid their benefactorix in her efforts against the Empire’s foes. 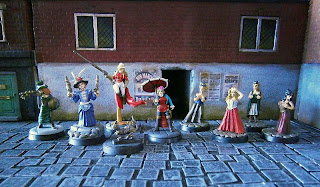 Mrs Slocombe is a formidable lady in the field of battle where she is an inspirational leader being expert with the rapier as well as a crack-shot with a pistol. By her exemplary example her ladies go forth willingly into danger knowing that they have been prepared by experts in their fields.

The wilful daughter of a wealthy tea merchant Elizabeth Bloch is a somewhat intemperate young lady. However, under the governance of Mrs Slocombe she has found an ideal outlet for her aggressive nature. She has mastered the martial art of bartitsu and thoroughly enjoys the destructive capabilities of galvanic energy.

The daughter of an American railroad tycoon, young Violet Wilde has been deemed by her distressed parents to be out of control. She has, therefore, been transported to the England and put under Mrs Slocombe’s care in order to curb her errant ways. Modelling herself on her beloved Wild West Gunslingers’ Miss Wilde is a deadeye shot with her trusty Colt Peacemaker.

The only survivor of a doomed safari on the Dark Continent Abigail Piccadilly was orphaned when her parents and their party were taken (and presumably eaten) by cannibal natives. After staggering from the jungle many months later the young Miss Piccadilly was returned to England. Once there she was housed with relatives who found the continual accounts of her harrowing ordeals upsetting to the lady and the children of the house. Following an incident involving a “borrowed” firearm and a gang of footpads Abigail Piccadilly was made a welcome student of Mrs Slocombe’s Finishing School.

Made as a present by a student with an interest in advanced engineering this is a pretty little toy that is a marvel of modern science. This charming little beast is Mrs Slocombe’s favourite gadget and she speaks about it constantly. In her inimitable style, she has had a small modification added so that it can be made more useful in a serious scuffle.

*Amorous Distraction (Use in the Shooting Phase. Target a male foe within 6” and LoS. If that target fails its Pluck Roll it receives a -1 penalty to Shooting and Fighting for the remainder of the turn.)

Many are the unfortunates that walk the streets of our modern cities and few are more unfortunate that those poor women forced to sell their only asset in order to eke out a meagre existence. Fortunately for some, there are those that have been able to allay themselves of Mrs Slocombe’s succour. These unfortunates often extend their support when their patron is in need of extra eyes, ears and hands.

Unfortunate Women may be armed with:

Well, after sitting on my paining desk for a while it was time to apply brush to metal and paint up the Tarzan Family. Mr T is looking as good as ever but Mrs T looks a little disgruntled even after her recent purchase from the Wilma Flinstone Collection. I'm not sure who the babe with the spear is - A baby sitter is my best guess (maybe the cause of Mrs T's disgruntlement). I think that's Cheeta on the right but it seems that he's been shaved down somewhat. I'm not sure who held him down for that little exercise.

Anyway here they are: The Folks From 134 Baobab Tree Boulevard. 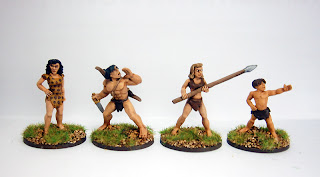