I need Landwehr for the two Prussian corps that I'm building. Unfortunately, I need about 180 of them. To me, that's a lot of figures and that means 'expensive' (especially if I buy them from Perry). I could get them from Elite Miniatures who have a distributor here in Australia but that still comes to a cost of bout $500 for the lot.

So, I decided to try sculpting them. The pic below is my test figure. I've never made any Napoleonic figures before and, when it comes down to it, these guys are a good starter due to their no-frills uniforms.

I'm quite happy with him for a first attempt and the photos don't really do him justice. Size-wise he'll fit well with Perry metals. He's a bit chunky next to their plastic Prussians but, then again, so are their own metals. I'll be taking him for a trip to Eureka for some critique later today.

I had to change the way I sculpt for this figure. Part of the reason for this is that I haven't sculpted for a while and I'm a bit rusty. However, the newer method I tried proved to be much easier. All it involved was using lots of smaller pieces of putty and using a different combo of tools. 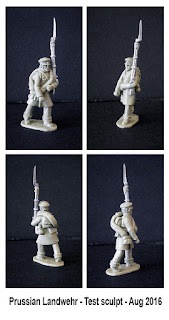 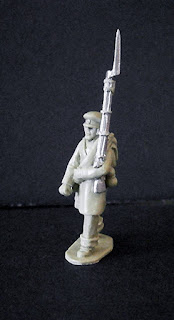 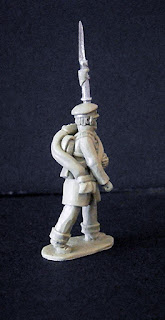 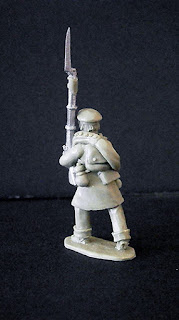 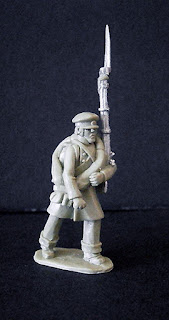 After a couple of weeks rest from Napoleonic's we had another game last night at the club. I had a few more Prussians to put on the table this time around so my opponent Mike Goldyn added some Polish cavalry to forces. This time around we set up a simple table and set up on opposite edges and advanced towards each other.

I watched an episode of Battlground (the old Edward Woodwood TV show about wargaming) and noted that during each move the players would state what they were doing. So we tried doing this and it seemed to work pretty well. It seems that communication is an important factor when it comes to simultaneous movement. Because you're not reacting to enemy movement in "your move", stating your intentions clearly and carrying them out as stated make matters easier. If something happens that causes you to react differently that you stated there is the rule of taking 1/4 of a move to assess the changed situation and reacting accordingly.

Besides all that, we're going back to old school gaming and it seems the gentlemanly thing to do. So why not do it that way.

Anyway, the game started simply with both sides advancing. I pushed out my skirmishers on both flanks. I had my (new) gun battery deployed from the first move and they started a barrage from turn 1, inflicting some casualties on the Polish center. 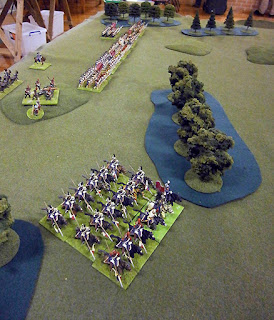 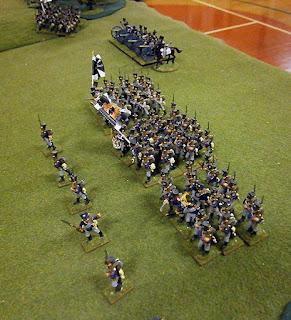 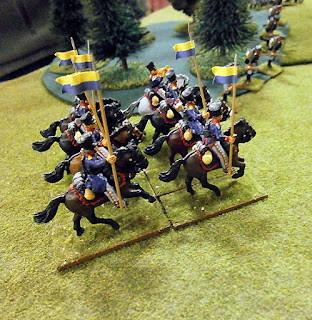 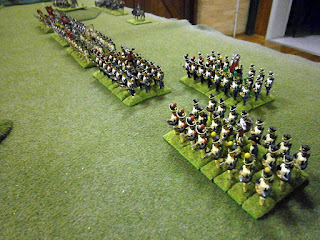 We continued to advance with a Polish cavalry regiment making its presence know coming from the flank around some woodson the right. My fusilier battalion turned to face them and formed into a closed column. This formation, which isn't included in the rules, became a topic of confusion in later turns. My Fusilier company skirmishing out front made a dash for the protection of the nearby woods and became separated from their parent unit.

In the center, my guns continued their barrage and inflicted more casualties on the center Polish battalion. On the right a Prussian musketeer battalion formed line on the top of a hill and my two squadrons of uhlans advanced. 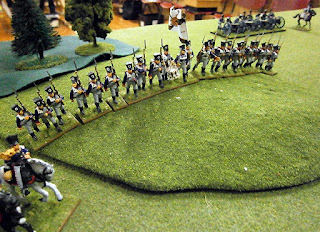 Turn three and both the Polish and Prussian cavalry charged. Prussian shooting caused a casualty on the Poles but it wasn't enough to stop them from charging home. On the right the Polish infantry formed square and brought fire to bear on the uhlans from the front and flank causing a single casualty. The flank fire, although not effective was enough of a factor to prevent their charging home and they retired in good order. But the Polish square took some casualties from the Prussian guns. 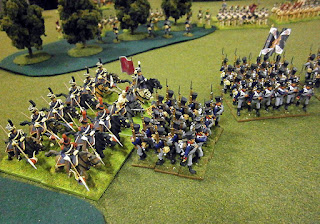 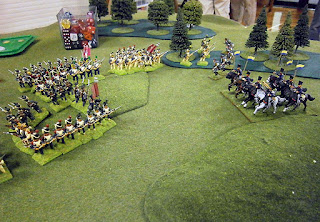 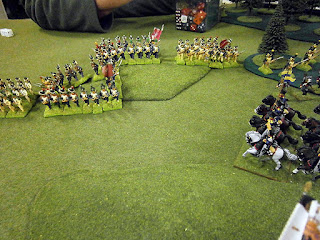 On the flanks skirmishers from both sides fired on each other with some minor casualties caused but without any decisive outcomes. 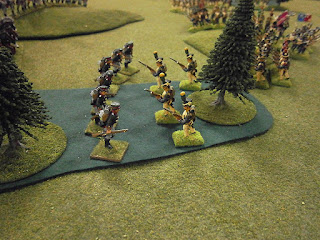 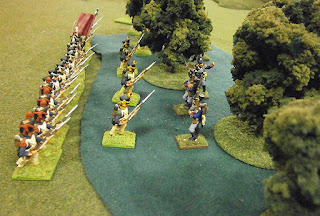 Turn 4 - Because the Polish charge took the entire period of turn 4 to hit home the resulting combat didn't take place until turn 3. We didn't know what to do with the closed column so we decided on reduced factors as per a square. This seemed to work for the first round of combat where the Polish cavalry forced the Prussian closed column back. A morale test had the Prussians holding firm which triggered a morale test for the Poles who also passed the option to charge again.

The Skirmishing continued on the flanks with the same results as before. The guns gain opened up on the Polish center battalion who were now looking a bit battered. The uhlans retired voluntarily in good order. 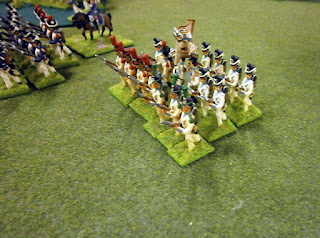 Turn 5 - The Polish continued to advance in the canter but the poor center battalion were now in canister range and took a pounding but a morale test had them Halt where they were (not a good thing for the next turn - Had it happened!). Although by this time after 5 consecutive turns of firing the Prussian guns needed to rest. 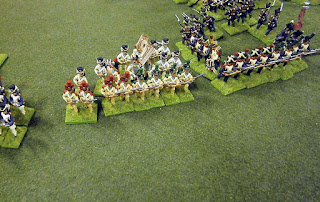 The Polish cavalry pushed on into the Prussian column and this time hit them hard (5 casualties). This is where we got a bit unstuck. The closed column seemed to be completely ineffective. They may as well have been in a column of divisions. 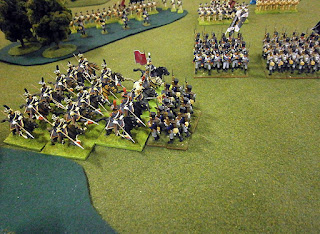 We decided that squares don't get pushed back following a combat but they will suffer from being unformed like all other formations. Any resulting morale tests will normally see average troops holding firm but there is the likelihood that poor troops (Spanish/Neapolitan, etc...) could break and run. A closed column, because it's a mobile formation would be pushed back the 50mm for losing a combat as stated in the rules. It would also become unformed. But, like the square you could expect half decent troops to hold firm from resulting morale tests.

Likewise most cavalry, if they a forced to retire, could easily reform for a second try.

And something else to consider: The rules don't take into account cavalry being blown. There is no mention of this anywhere in the rules!

Another problem that arose from this melee was: If the cavalry's morale test results in "Charge" do they charge in the follow up round or are they just continuing to press the attack? We didn't solve this question because it got lost in all the talk of squares and closed columns.

Overall, it was another good game. We keep getting bogged down with situations that we can't easily solve but this is okay. The idea of all these small games (apart from the fact that my forces are still quite small) is to hammer the rules into good working order. The other basic aspects- movement, shooting, formation changes, etc... has become faster and we can pretty much calculate things without referring to the charts. Some of this is down to making movement and formation changes into general concepts and removing them from the National Characteristics quagmire.

I've been continuing to paint Prussians and I've finally finished my first foot artillery battery. We decided to make batteries using multiple models. In the NCiM rules a battery is a single gun on a triangular base with 10mm per gun but in keeping with our like of large battalions of many figures we decided on many guns too.

We also decided to mount our guns on a 20mm per gun basis. This makes a 8 gun battery with a frontage of 160mm. So, I decided to mount mine as two bases of 3 guns with the 2 howitzers on a separate base. It looks like a proper wargaming battery with plenty of movement and also looks intimidating. I mounted the figures on individual bases so that I can remove casualties and also, if they ever abandon their guns they will be shot!... No, no, no... if the crews abandon their guns I can remove the figures and leave the guns in place.

Now I just need a limber. 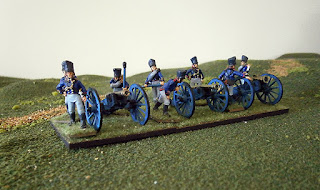 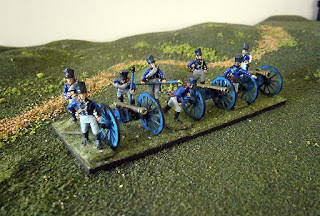 I also painted up a second squadron of Uhlans - Brandenburg Uhlan Regiment - There's only 8 of them at the moment as I'm waiting on more figures from Perry to finish them off. They'll be arriving with a regiment of Brunswick Uhlans which will be painted up as the 3rd Silesian Landwehr Cavalry. 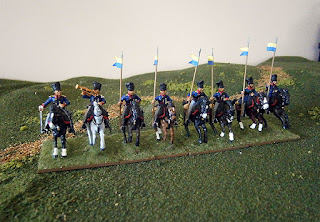 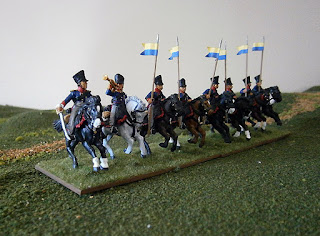 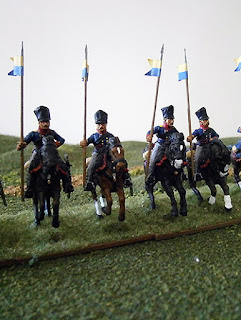 For those interested I've finished the Quick Reference Sheets for Napoleons Campaigns in Miniature. They're pretty much the same as the previous layouts but there are a couple of changes. The most notable layout change is on the National Characteristics page.

After a few test games it became apparent that the Prussian Fusiliers were under stated. Where the skirmish troops of most other nations had a fire factor of 2 or 3, Prussian fusiliers had a fire factor of 1. I believe that this came about because Quarrie decided that they didn't skirmish and thought of them as fusiliers in the French vein (ie: regular line infantrymen). Why he didn't equate them with British fusiliers (fire factor 3) is a mystery. However, in order to find a balance I made them Fire Factor 2 and increased their Melee Impact to 2 also. After all, they were the best trained battalions in their respective regiments.

Also, something that I neglected to mention in my last post about these charts, I added an improved weather chart for those who like to include weather. The rules for weather were a bit static so I made them a bit more dynamic so that you don't have to end up with Heavy Rain for the entirety of a game.

Anyway, here are some Dropbox links for two full A3 sized print quality sheets. These are designed for double sided printing onto A3 card stock. Print it. Fold it and you have a nice little QRS with all the charts (and other stuff hidden away in the text) in one place.

Hmmm... It seems that these links wont link. So copy and paste them into your browser and you should be able to access them. If this doesn't work let me know. Cheers.

And for those of you who would prefer single A4 sheets here are the links for those too:


P.S. If I didn't mention it previously, I also invented a Random General Generator to create factors for a random, non historical, general.