One Fine Day on the Saxon Shore...

For the moment it seems that I have enough Marian/ Cesarean Romans but how do you stop painting Romans once you start when you also want to paint figures for other eras? The answer is: paint Late Romans to protect Britannia from the Saxon menace.

These are a mix of Crusader (the unarmoured guys) and Footsore Miniatures (the armoured guys). Both ranges are nice looking figures but the animation on the Footsore figures is definitely superior. That's not meant as anything disparaging to Crusader. I knew this when I purchased the figures and I wanted the unarmoured guys to look a bit more stoic. I think they go well together.

I have some British/Welsh cavalry on the painting table at the moment which is a mix of Footsore (again) and Eureka. Eureka don't make any specific British cavalry but with a head conversion on some of their Dark Ages cav they came out very nice. I'll post them when they're done. 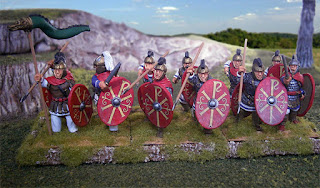 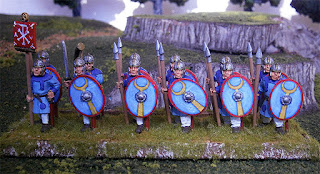 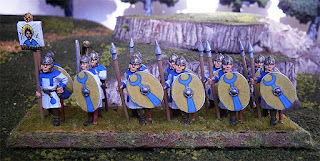 Well, I decided to re-base my Celts onto large common 120mm x 60mm bases. I like the look of this basing style. Besides... I managed to spread out the figures with only 9 or 10 to the front rank instead of 16. Being warbands they will need a second row but I'm planning on making these second rows with even less figures to give the impression that most of the warriors are crowding to the front. 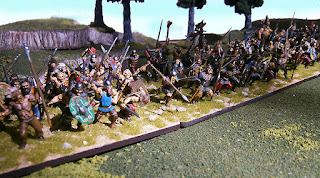 I also made a command stand using a variety of figures. The general is from Eureka's Beowulf range with a bit of putty added to make him look more like the noble general that he is.

Close up
I think I'll name him Duplexsix 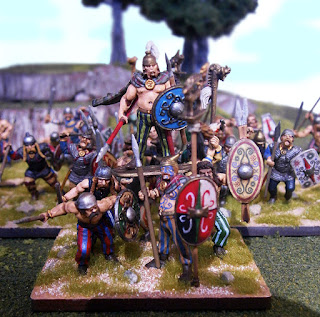 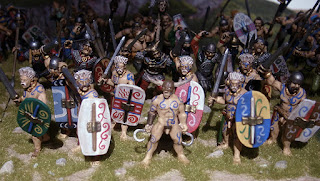 And a couple of chariots 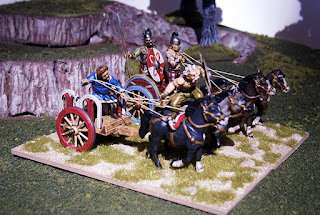 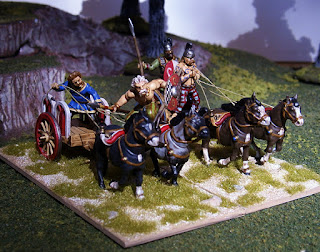 There be Dragons (Rampant Ones)

Well I relented and, out of sheer boredom, I downloaded Dragon Rampant by Dan Mersey on my Kindle.

I've played his other game Lion Rampant quite a bit and Dragon is, of course, pretty much the same game but with a fantasy element added. What I liked in the reading was the old D&D feel of the whole thing. I use to be a big fan of fantasy wargaming but I've been very put off in recent decades by something that I can't quite place my finger on.

So, I decided to make a warband based on the Granbretan figures that I made for Eureka. It even inspired me out of my long time funk to start sculpting them again. So there will be more figures to add to the list in the future.

Anyway, I decided to start by finishing off this little chap that has been sitting on my painting table for the last 12 months or more. He was 99% finished and only needed a couple of dashes of paint, some varnish and a nice base. He is Astrovak Mikosovar, leader of the Vulture Legion and he'll be the commander of my first Dragon Rampant warband. 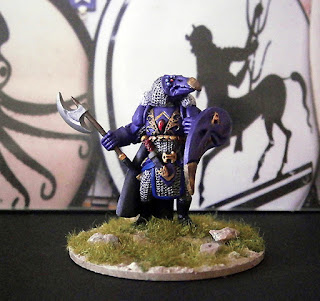