New Life for an Old Project

A few years back I made a few Prussian Landwehr figures in 28mm. I did intend to make a whole bunch of them because I couldn't find and decent, clean, well cast and easy to paint figures. A couple of weeks into this project I saw a new (at that time) range of Prussian Landwehr from Front Rank and I completely lost heart as well as faith in my ability to make these figures.

Anyway, moulds were made of some of the figures and I recently found a bunch of them whislt doing a clean up. I found enough to make a battalion so I've decided to paint them up. I'd added a couple of Perry figures for the standard bearer and drummer and the captain is from Warlord's as far as I recall (I did find a Perry commander so I may substitute him).

Here they are in the raw. Whilst cleaning the figures up (and they didn't need very much cleaning thanks to the great casting by Nic Robson at Eureka Miniatures) I noticed that one of them has a bit of a small nose. I have a feeling that there might be a tiny speck of putty that was the tip of his nose still caught in the mould.

If they paint up well I might make a few more and finish the range in the new year. I estimate that I'd need 5 more figures as a minimum: 2 more troops, a commander, drummer and standard bearer. I did have a few more half completed figures that I kept for a long time, but I threw them out a while back.
Alackaday! 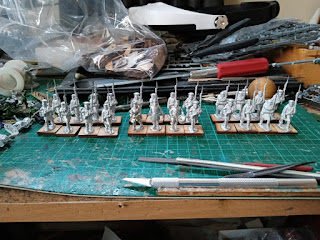 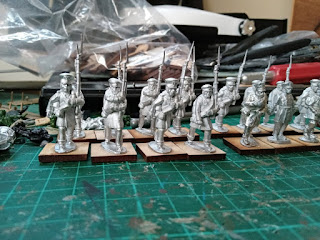 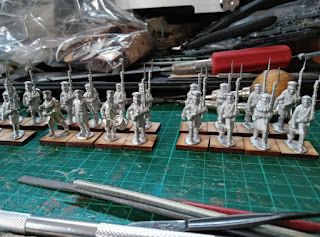