Waltzing Matilda II's and Other Stuff

I've been busy. Making terrain and painting models. It never seems to end.

This time it's some Matilda II tanks and a little Vickers tankette for my fledgling British 8th Army. I got these models from Early War Miniatures and whilst they look nice, I really did not enjoy painting them. As you see them this is their second paint job. The first didn't take.

These models are resin cast and they had too much release agent (maybe this is due to the models being quite detailed). As a result the first paint job started rubbing off just from handling them. I initially used my regular Vallejo primer and it didn't want to work. So, another soapy wash and I used a spray auto-primer. This seems to have worked.

Having to do the Caunter camo a second time didn't endear me to these models. The first time around I used a light grey-green but for the second effort I decided to go with the traditional (although supposedly wrong) light blue.

I also used Plastic Soldier decals. I bought the 7th Armoured Div set and they are shite.
1: They are too big. Not 1/72, 20mm.
2: They tear apart very easily. Same problem with the German ones too.
I won't get any more of these in the future.

I painted the red & white identification stripe things.
The crew are AB. 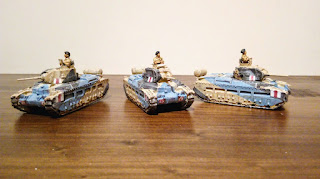 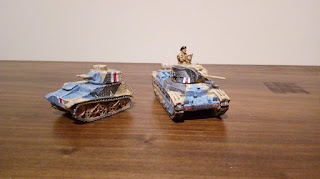 And I also did a 40mm AA gun. This is a Zvezda kit. A very nice model but it's very clean and perfect. It's hard to make it look like it's seen some action. The Loyd carrier is one of two PSC models that I got in a swap. 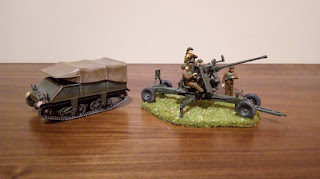 But not only that...

A bunch of German stuff. A troop of PSC Panzer IVH's. Very nice models. Easy to make and they pained up nicely. I actually finished these a few days back and they were in my last post of the terrain mat. 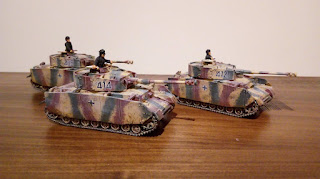 And last, but not least: A Pz IV F1 to give some heavy firepower to my DAK and a panzer grenadier command vehicle with a 37mm. This half track is one of the diecast Sd.Kfz 250 radio cars that I scuffed up and posted earlier in the year. But I decided to add the gun and give it a proper dirty desert paint job. 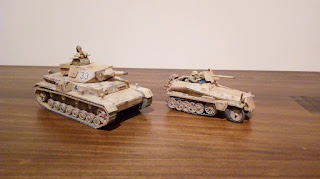 (I just noticed I haven't painted the tank's tracks. Oops!)