Having tried a test doing a Teddy bear fur mat I decided to go all out and try something more ambitious. And I'm not really very happy with my results.

Because I can't get larger sheets of fur with a shorter pile, I had to revert to a couple of smaller pieces and hope to be able to link them together. My plan worked to some extent but not to a level that I'm completely happy with. 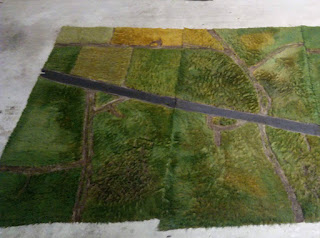 That was the plan and it's not so bad, considering what it is. They're not exactly the same size but I took that into account with the extra 10cm which will overhang the table.

Then I decided to add a third section. The idea being that this third section would fit in such a way that I'd be able to get several configurations with the same pieces. This part didn't work out quite as well as I hoped.

Part of the reason is that I miscalculated some of the measurements so the roads & tracks don't always match in some areas and I also mismatched the colours between the first (left) and last (right) mats. The third mat was also supposed to be able to be added to the bottom of the first two but it doesn't. I'm not sure what I did wrong in that department. I was up to my armpits in shaved fur & paint pots (and I was doing one piece at a time with the others drying on trestles). 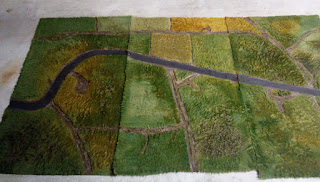 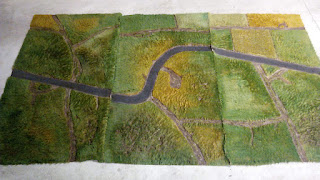 It sort of works but I'm not 100% happy. A single piece of material would work better. Maybe I should make a fourth piece to fit on the bottom of mats 1 & 2.
Posted by IanKH at 23:32

Email ThisBlogThis!Share to TwitterShare to FacebookShare to Pinterest
Labels: Terrain