After setting out my Elves to see what I have and get a good headcount, I decided to do the same with my evil-doers so I could decide what I need to add to their ranks. I thought I had more goblins but I don't. The Elves outnumber them quite significantly. The difference is: the evil doers have a lot of trolls, ogres, spiders, wolves and other nasty creatures that the elves don't have on their side.

That's the whole army. I have ten units of actual goblins/orcs. I decided on ten because it's equal to the cohorts in a Roman Legion and Tolkien often refers to "orc legions." However, I do wonder: should I make the individual units double ranks or keep them as single ranks? I do have a box of the new, excellent looking, Wargames Atlantic goblins on the way. I'd like to make them as a solid pike block for the center of the battle line. I hope I can. 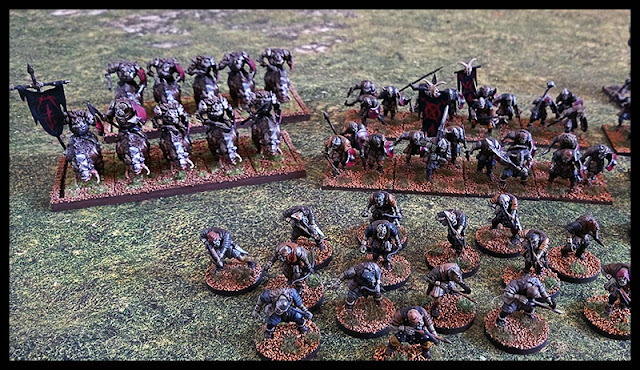 The cavalry figures above are from the Mantic, Kings of War range. I think they're called Gore Riders (or something similar). They're big orcs mounted on boars. Horrible figures to put together and they're made of that horrible Mantic resin but they look good when they're painted. 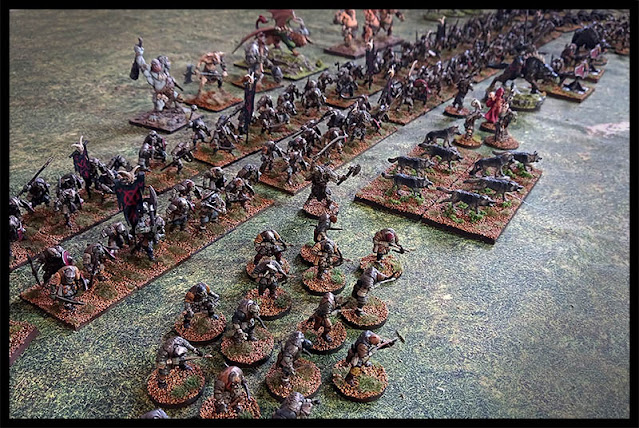 I don't have any formed missile troops for these guys. Instead, I have a whole bunch of skirmishers - 30 of them to make up five skirmish units of 6 figures. 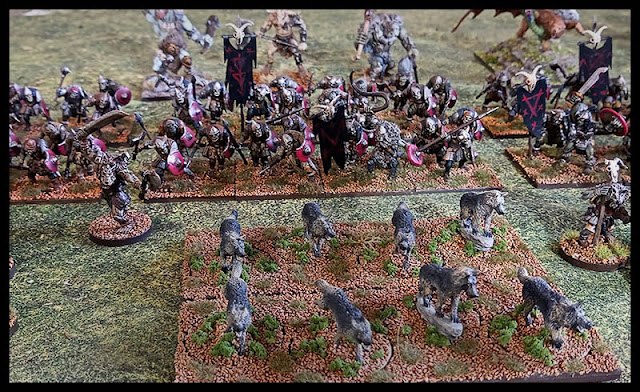 This wolf-pack looks pretty tame by fantasy standards. These figures are from Reaper and they are far too well proportioned to look ferocious and mean as fantasy wolves should. These are more of a harassing unit rather than a frontline fighting force. 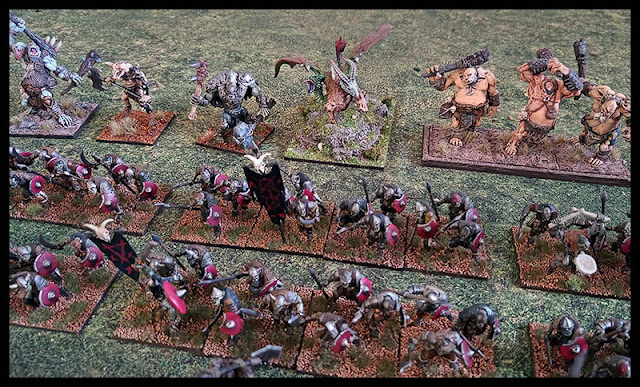 The big guys at the back. A unit of trolls and a few other evil creatures. In the rules I'm writing I added rules to integrate single creatures into the ranks of some units (mainly warbands). This rule doesn't work very well with single ranked units, hence my thinking about double ranked warband units. 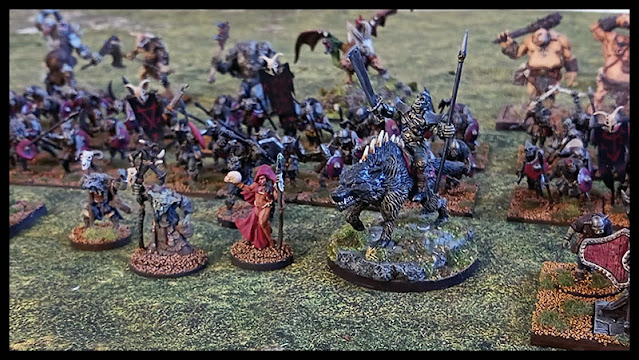 This is the general on his mighty big, horned dire wolf. This is a Wizkids figure with a little bit of conversion done on the weapons. If he's not in the role of General he can be used as a hero to lead the orc boar riders. The spell casters: The one on the left is an Oathmark metal figure the other two are Reaper Bones. 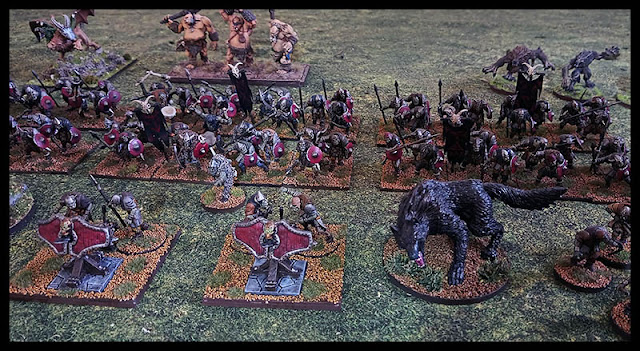 The giant Dire Wolf (from Wizkids I think...?) - I've used this as an alternate general in the past. It's seems fitting as Sauron, in the Silmarillion, sometimes takes the form of a giant werewolf, so I can't see why my general can't do the same. As it is, it's a big mean looking model. The ballista are (again) from Wizkids. A great, versatile model and you get two in each pack. 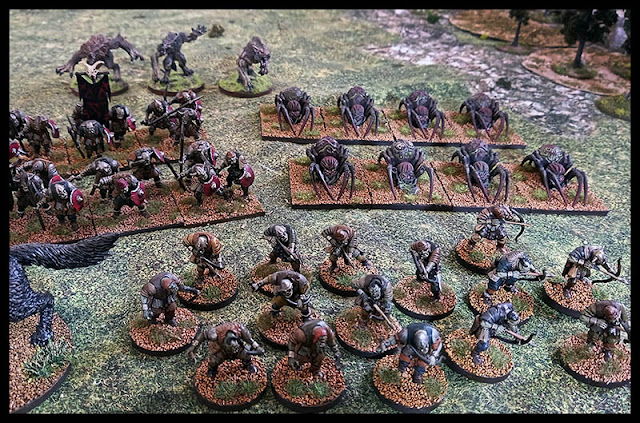 Giant spiders as light cavalry. I've had the figures for a while and they fit the part well. I could add riders but do they really need them? Werewolves up the back. My rules have a special rule called: Lycanthrope. With this rule a were-creature can be added to a unit but only revealed when the unit goes into combat for the first time. That's how I've used these figures so far by adding one to the wolf pack. I made this original unit of three for Dragon Rampant. 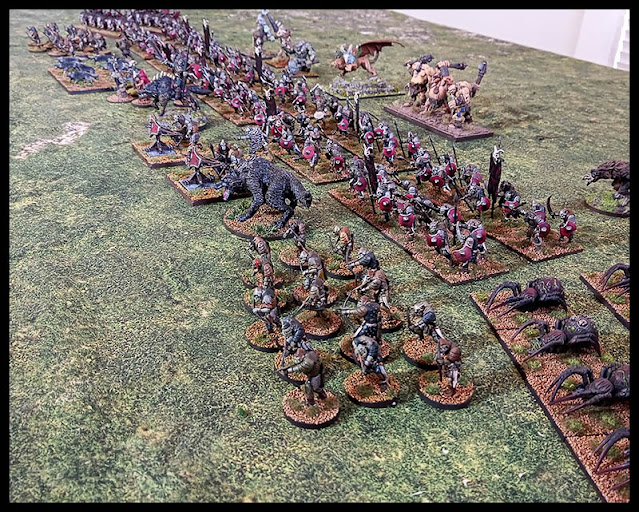 In the pic below you can see what I mean about the units not looking quite right. To me, they don't look deep enough for a massed goblin/orc host. I think they should be two ranks deep because they just look too thin on the ground. I could field them as five warbands of 8 bases or six warbands of 6 bases with some big creatures added here and there, to make up a seventh warband. But... I don't know which way to go. 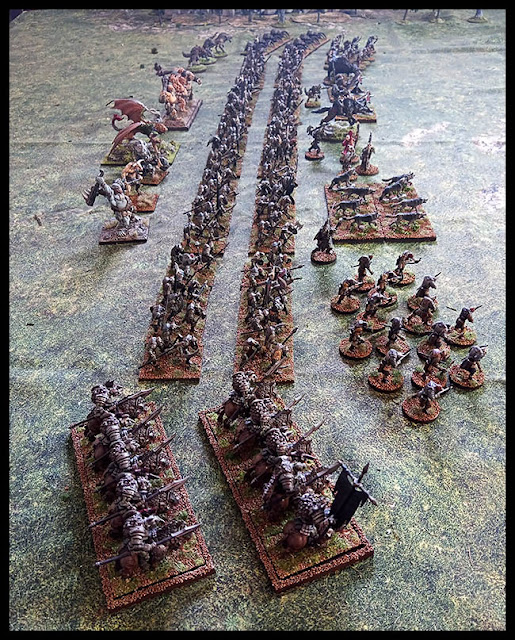 And that's them for now. Not as many as I thought but I do have the box of Wargames Atlantic on it's way to boost their ranks. Because of the way I paint these guys (which is pretty rough) I can pump them out at a rate of about a dozen a day. I'm unsure how much detail the WgA figures will have but I'm hoping they won't require me to paint too many fiddly bits. I like my orcs to look dark, grimy, rough and ready. If the painting is a bit rough it just makes them look even more evil!
Posted by IanKH at 17:15