I've been slowly building up an elfin army since the beginning of last year and I've been a bit confused as to what I have and I've been wondering if it's large enough to be called an army. I only just bought a box to store all of it in one place. So I decided to put them all out on the table and take some photo's for posterity (knowing my own track record of creating armies and then selling them on). 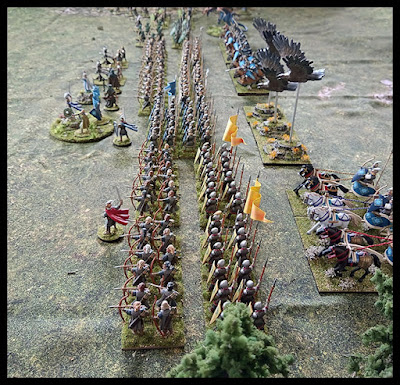 The vast majority of these are the Oathmark plastics from Northstar. I'm not sure how many boxes - I think five boxes of heavy infantry and two boxes of light - But I'm not sure. I still have the best part of a box of heavy infantry which I can use to either boost some of the existing units or to build another phalanx.

So, now that it's all set out it's not bad at all it's quite a respectable sized force. I only have a 6'x4' table and this is pretty much enough to fill one long table edge considering I've put the cavalry and chariots in the rear rank. 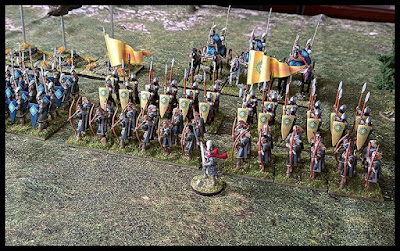 I've tried to create distinctive commands within the army. They could be considered different houses, cities, or different fiefdoms, etc... All under the command of the Erlking. 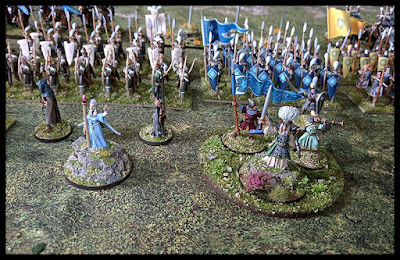 The ballista look nice. These are from Wizkids and with a little bit of modification they came out okay and fit in well enough. With many of the units I'm not sure if they should be mixed spear and bow regiments or individual units. I've been playing around with various concepts for the rules I'm writing but I'm uncertain which way to go. 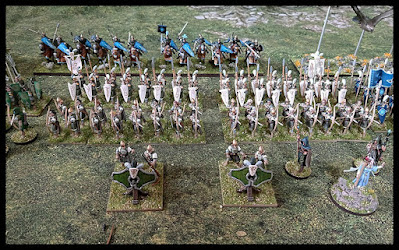 I like the unarmoured light infantry. The figures are more versatile than the heavy troops and I've used them to make a couple of peltast/javelin units as well as skirmishers. Also, in the pic below is my dragon mounted knight which can be either an alternative general or a hero. 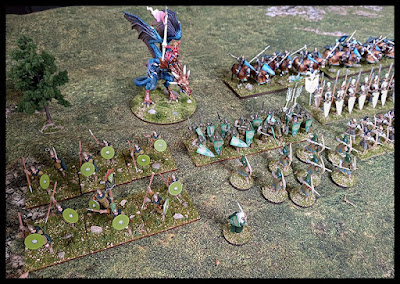 On the far left of the photo below are some other skirmishers that I kit-bashed form the light elves and some Conquest dark age archers. I recently found a Conquest sprue with another couple of bodies so I made them up and I'll paint them to bring them up to an 8 figure unit. As you can see, I consider these Green Elves to be a lighter command suitable for deployment on the flank. 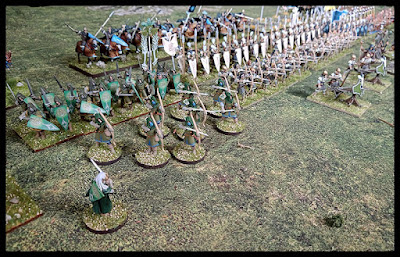 The blue unit in the centre is supposed to be a phalanx. To me it makes sense for elves to use more archaic unit formations. When I last read the Silmarillion (last year) I noted that Tolkien used the term "phalanx" to describe the elvish host going into battle. I like this concept but I'm unsure how to model the formation: 3 bases wide by 2 deep as I have here or 4 bases wide to accentuate a big unit? I'm not sure. The use of chariots also falls into the concept of archaic units and formations. 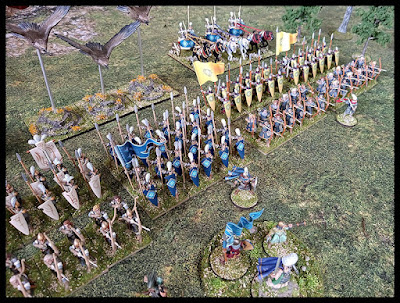 Eagles! These are Wizkids models too. For what they are and price-wise they're good and they do the job. It seems that giant eagles are one of the acceptable weird units for an elfin army. I'm not sure if they should be individual creatures or a single unit. In the rules I'm working on they can be either (like all the creatures in the rules). 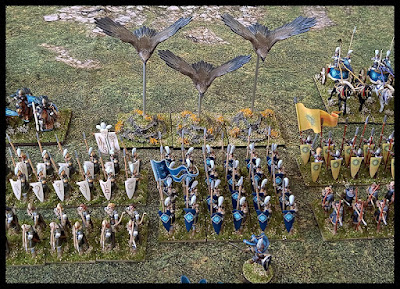 I think I need more cavalry. I kit-bashed these using Gripping Beast Noble Goth Cavalry and they came out nice but I would really prefer something more elfish. I really like some figures I saw by Mirliton, but being in Australia the cost for the figures together with postage was far more than I could justify. Also, I'm not sure if the cavalry I have should be considered one unit or two. Six figures for a cavalry regiment just doesn't feel right to me. 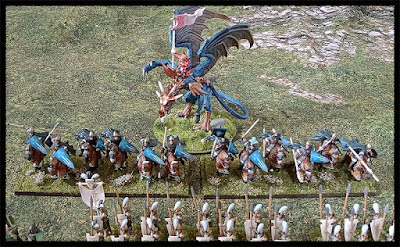 And there it is. My elf army as it stands at the moment. It's not the biggest army out there but it's large enough to be called an army and not a warband or raiding party and it will grow, because I'm a fool in that respect. What I really need to do is decide what size the units should be and stick to my decision. And that's something that's not easy for me to do! 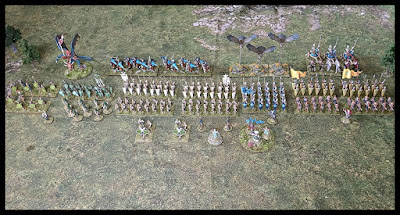