One Battalion at a Time

And so another new French Napoleonic battalion is finished. It's been a long while since I last painted French ligne and they are still a challenge. I have quite a few of these Perry plastics and I don't like them very much. I'm not a great fan of the shabby campaign look. Sure they may have looked untidy on the march but they still presented in their best attire on the battlefield. In my opinion, nothing done by the Perry's represents the French army on the day of battle. 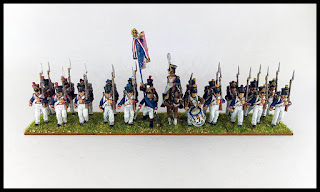 A new thing that I've done with this battalion is to include the Chef de Battalion mounted. I've never done this before because I've always mounted the figures on 20mm deep bases. The move to 40mm deep double ranks now allows me to include the horse. I'm inclined to do this from now on to all my battalions. This means I'll have to retro-rebase my recently rebased battalions. 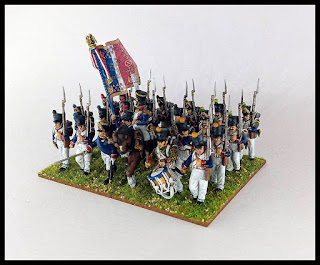 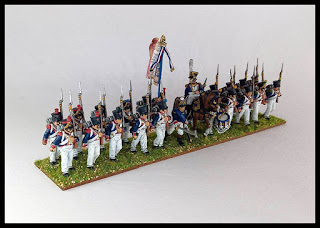 Now, even if I'm not overly keen on the figures, they are what they are and I'm happy with how they tuned out. I'm also not a fan of the 1813-15 uniform and would prefer more plumes and colour but I painted these to go with my Prussians so I'm kind of stuck with them. I've painted too many Napoleonic armies and sold them on and now I have very few troops for myself. Oh well, I'll probably never learn.
Posted by IanKH at 00:32