I played a game of Age of Eagles last weekend with some friends. AoE is a Napoleonic set of rules by the same guy who wrote Fire and Fury the well known American Civil War rules. I've wanted to try these rules for a long time but never got the opportunity until last week.

The game itself was The Battle of  La Suffel - The penultimate battle of the Napoleonic Wars (but we used Revolutionary figures). 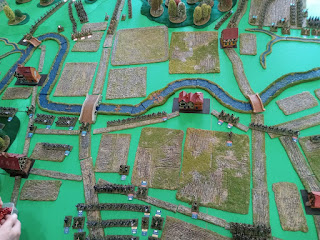 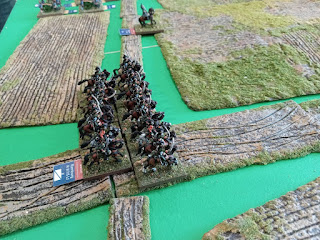 The figures themselves were well painted and looked really nice but they didn't quite look right to me. This is because of the rules. In AoE, each of those long lines of troops or groups of cavalry represents a brigade. I found this pretty hard to work with. I didn't really understand how the movement worked or if formations made any difference. 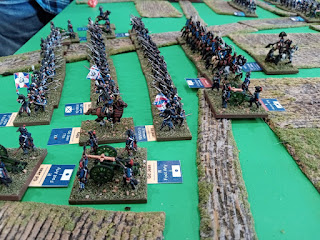 I'm not very keen on the movement procedures at all. Every time you want to move a unit you have to roll for it. So trying to coordinate movement became very awkward. I understand that this is supposed to represent the level of communications of the time and fog of war, etc... But it really slowed the game down and, in general, during this period once troops began carrying out their orders they pretty much got on with it. I think this system is just a carry over from the ACW rules. But as far as I'm concerned what seems right for one period is not necessarily right for another period.

Also, there were several bridges but they made no difference. Infantry, horse and even artillery just crossed the river with minimal problems. What is the point of having bridges if guns can just cross rivers with ease? I didn't get it. 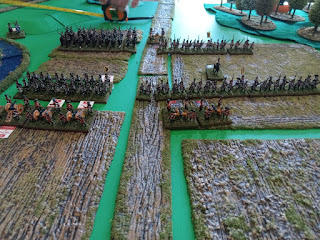 The artillery rules are quite poor in my opinion. Artillery inflicted barely any casualties through the whole game. The majority of the time the guns just caused units to become Disrupted and this barely affected them at all because most of the time the unit rallied the next time it moved. Even when I had four batteries targeting a unit at 12" range the best I got was to destroy another battery (one base). That was the only casualty they inflicted over more than a dozen shooting phases. 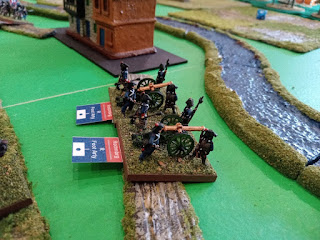 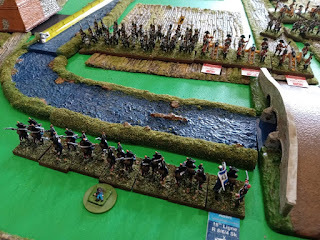 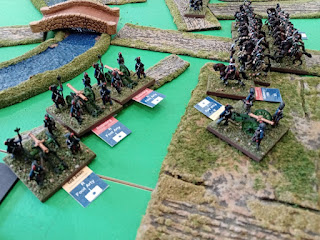 Musketry rules seemed okay but I didn't get to shoot very often. Melee was very confusing and I couldn't really get my head around it. I had infantry with a cavalry division in front and I couldn't form square. The cavalry charged, the infantry fought them off and then they formed square. I then reformed the infantry into line again. The cav charged again and smashed them because they weren't in square. The cavalry were not winded or in any way affected. They just charged again.

I just did not get it at all. It made zero sense to me. 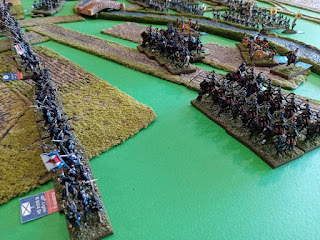 So, overall I enjoyed the day but after some thought I think the rules stink. They played like a ACW game with Napoleonic figures and cavalry charges. I didn't get the feel of a Napoleonic battle and when it comes to wargaming I've played more Napoleonic's than anything else with several sets of rules over 40+ years. I had been wanting to try AoE but I now know that there are better games out there.

In my opinion: just because the troops fight in lines, what works for ACW does not necessarily transfer to Napoleonics. 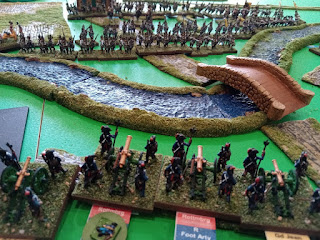 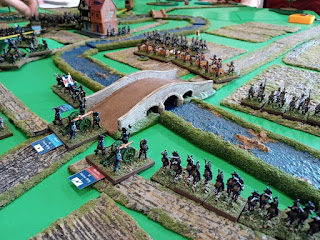