I made a new church.

I looked long and hard for a nice 20mm model but I was put off by the price in most cases. It looked like I was going to have to pay $50 to $70AUD for a decent 20mm church. And add postage to that.

But I found a card model in a local railway shop. Still at a considerable price but not quite so hard on the wallet. So, I thought about it for a week or so and then decided to go for it. And I'm glad I did. 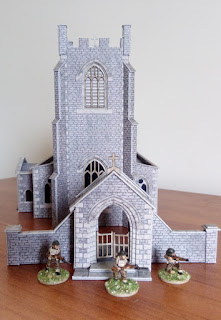 This is a fantastic model. It's fully detailed and textured. It's strong and hefty and very solid. I'm sure it will be able to take the regular beating that most wargaming terrain seems to take. The detail is fantastic, especially the windows in which some of them are 4 card-layers thick! 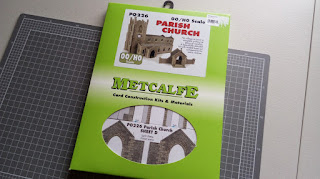 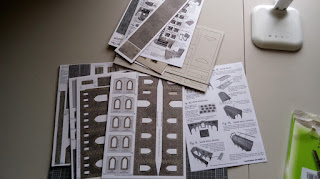 There were a lot of pieces and emptying the packet was quite daunting. But I just followed the instructions and they were pretty clear and easy. The parts are 95% pre-cut. I say that because each part has a tiny area that it still attached to the card and needs cutting. But all very easy. 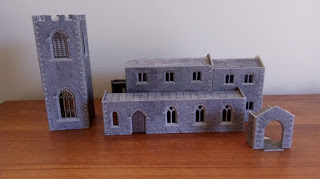 I left the tower separate so that I can easily put troops into the lower floor. It lits out and fits back in very easily and very snug. I also added an inner floor to to place troops at the upper windows. 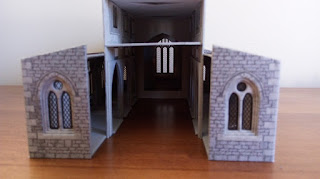 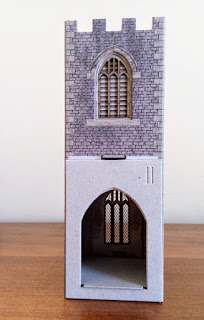 The lych gate is separate and I'll incorporate that into a terrain base. You can see the entrance hall on the side. This piece can go on either side and I haven't yet decided where to put it so at the moment it's still lose. 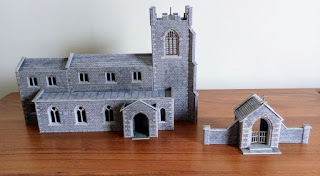 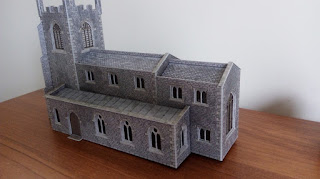 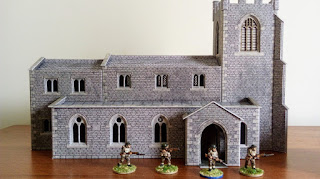 The roofs come off so that troops can be placed inside. The bottom of the rear is quite deep but still accessible. 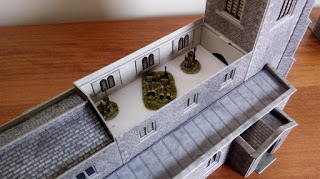 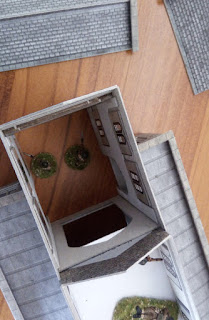 I couldn't make the roofs of the wings removable, but they don't really need to be. Just place figures above the windows to show which windows they're hiding behind. 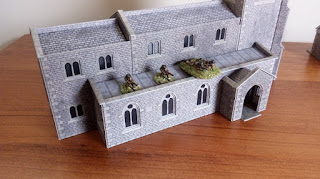 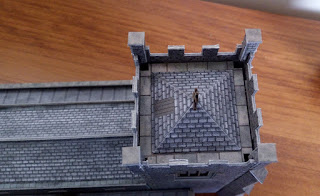 The top of the tower was a problem. I needed to trim the lid to make it easy to remove and replace. Nothing drastic but it needed work. The bell tower itself is very deep and in play it would be impossible to place and remove figures. So I made a little platform that fits in securely. It's just a piece of card glued onto lump of balsa wood. 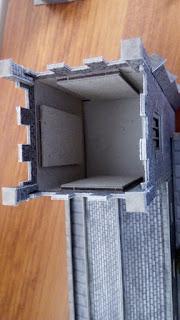 A sniper can now be easily placed and removed from the bell tower. 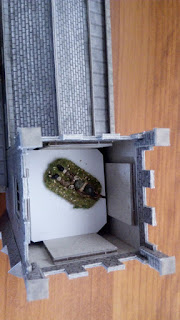 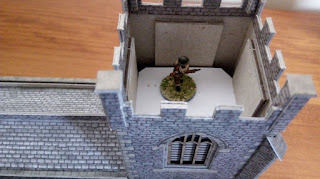 This photo gives a good look at the detail on the windows. I did watch a you tube tutorial and saw one guy paint the clear window film with glass paint to create a stained glass look. Very impressive but hey! I'm making wargames' terrain. Not a model railway. 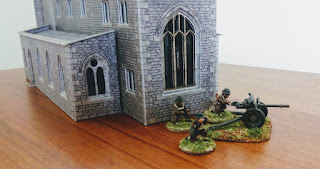 So, all up this took me two days to finish. I could have done it quicker but I was doing a bit at a time in between household chores. If you're considering something like this I can absolutely recommend this one. I now have to make a decent churchyard.

So there you have it. I build a church.