I've been getting my British 8th Army together for some Western Desert action in the near future.

I started with a box of Esci 1/72 and a box of Revell 1/72 plastic figures. The Revell figures turned out to be the old Matchbox 1/76 figures and they are tiny and poorly moulded. So that was a wast of money.

The Esci figures looked nice and I painted up a platoon: 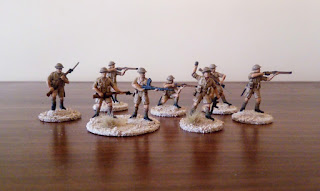 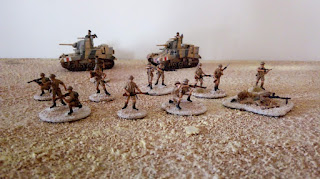 But then I went to Little Wars Melbourne where Eureka & AB Miniatures did something reprehensible and nasty. They brought out these beautiful 20mm 8th Army figures: 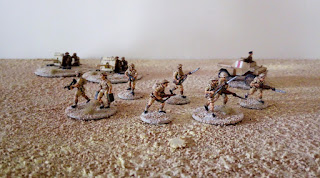 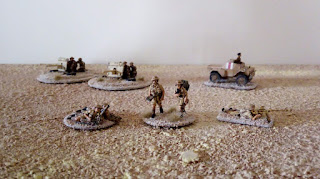 Not really. These figures look fantastic and the range covers just about everything we wargamers will need. The only thing I don't like about them is my own painting. I added a wash of GW Agrax Earthshade and I think that ruined the paint work a bit. The next lot that I get (and I must get more of these now - For, it is written!) will get a watered down wash.

I also made up a box of Plastic Soldier Company M3 "Honeys" and put some paint on them. They came up okay. One of the commanders is from the AB late British range. I'll have to get some more AB commanders for future models. 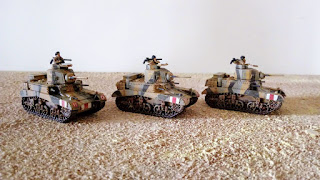 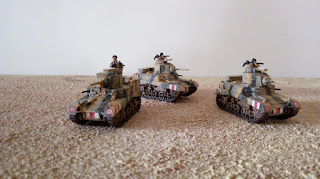 These models below are resin recasts. I got them because I'm having trouble getting actual models for much of the early war British stuff. They sort of look okay but I don't like them much and I doubt that I'll get any more in the future. However, I still have a few other recast things that I got at LW and I'll make them up soon. As it is, we have a big, big model show happening in Melbourne this coming weekend and I'll see what stuff I rustle up there. I really want a few Matilda II's. 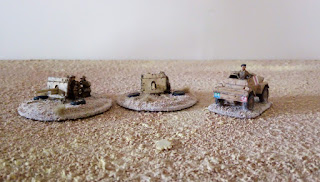 The commander in the Dingo Scout Car is the "Monty" figure from the Revell/Matchbox figure set. I can foresee these figures being used for conversions and suchlike. Currently I'm thinking that they might make some good dead markers.
Posted by IanKH at 21:35