For the 7th year in a row my club is celebrating Pirates in September. Every September we dust off our ships and break out our various crews and sail the seven seas in search of plunder and fame.

Yesterday (the first day at our new venue) we played a simple game that consisted of sailing around the table, getting the booty and shooting each other. Nothing complicated just lots of dice rolling and having a bit of fun.

The large table was covered with a blue cloth with a few islands scattered about the place. In the pice below my trusty old tub, "The Hairy Kraken" captained by the indomitable Spaniard Don H'emmingo, can be seen in bottom right corner. In the bottom left is the Good Ship Csabi skippered by Captain Chuckles (but more about them anon). 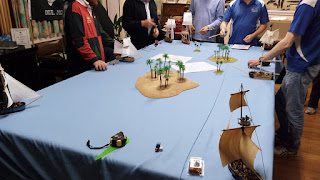 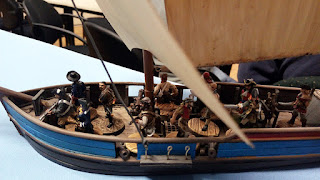 The Good Ship Csabi and her crew of perfidious Englishmen. 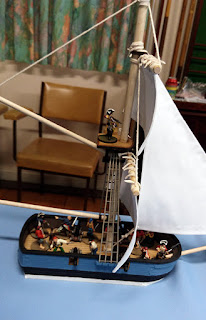 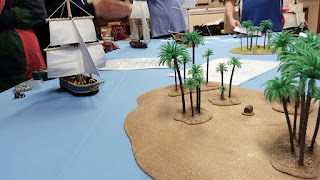 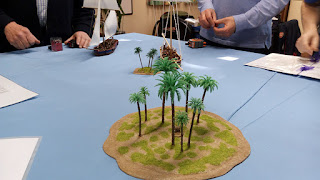 At the start I noticed a treasure chest on the main island and I determined to get it. But I also noticed that Captain Steve was closer and had the wind in his favor, whilst I had a reaching wind. I thought he'd get there before me so I came up with a cunning plan... I would let him get to the island first and then I would sail up behind him and blast his crew with canister.

But the dice are a fickle mistress and I rolled well whilst Steve rolled poorly so I, after could of turns of movement I had a change of plans. I sailed up near Captain Steve and we traded canon and musket fire with the result that my enemy lost three of his crew (one of those because both of his canon misfired & one exploded). On top of dead crew a couple of well placed roundshot left Steve in a bad way, so he sailed away thinking it best to save his remaining crew, and I sailed straight to the island.

The dice were on my side this day! 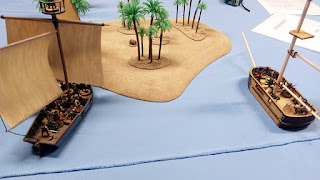 There be giant 30' sharks in thees 'ere waters... Ahrrggg! 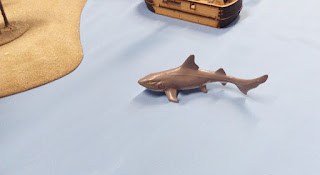 A party alights from the Hairy Kraken to hunt for treasure! 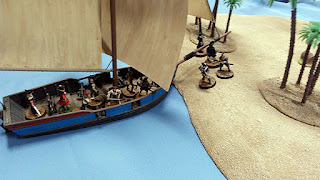 Meanwhile, other ships and their captains sailed around shooting each other. On the smaller island Captain Rufus Roughhouse landed to claim the other treasure located therein. 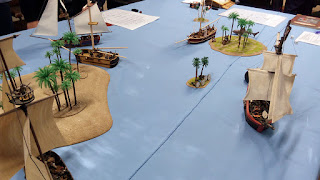 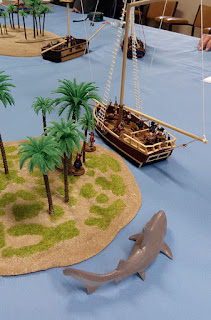 After a couple of turns or treasure hunting, the treasure was stowed away on the Hairy Kraken and Don H'emmingo was a happy soul. 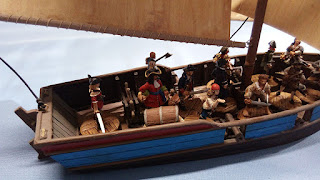 On the other side of the table Captain Chuckles and the crew of The Good Ship Csabi were shooting up anyone who came withing range. But His Majesty's Ship was making quite a few enemies.

And, yet again everyone was shooting everyone else.

I now had to get my ship afloat again and once more, the dice were on my side and Don H'emmingo effortlessly got the vessel back in action. This was important because Captain Paul, master of The Blood Vessel, was looming up on my rear. The next turn, the dice spoke again, Paul had the initiative and the breeze but he rolled crap and move little. I, on the other hand, had the breeze against me but I rolled the dice like a pro and backed up the ship like Starsky & Hutch on full throttle.

The next couple of turns resulted in Paul and I maneuvering & trading shots. Again, it was my day with the dice, I holed his ship a couple of times and killed three crew whilst all I suffered was a couple of hits of hull damage. 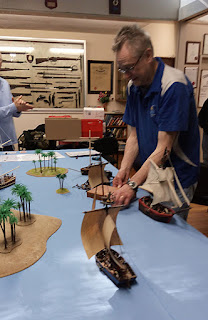 Cap'n Rufus Roughhouse looks on in stunned silence,
(a rare and uncommon state for this fine fellow). 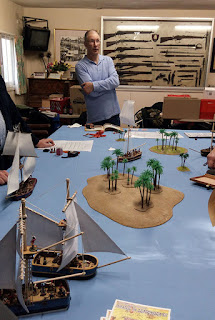 It wasn't all pirating on this day. The ACW was raging on a table next door. 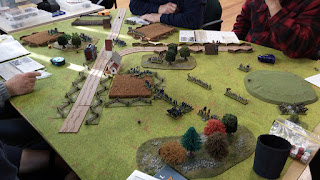 And so, we come again, to The Good Ship Csabi...

Whilst I was engaging the Blood Vessel, Charles (Captain Chuckles) came to close quarters with Young Captain James. The blasted and shot and the English Marines got the better of his pirate enemy, who's crew mutinied and surrendered. Charles was proud of his efforts and moved on to his next target - Captain Tom. They closed and started shooting with Tom getting the worst of it (and a bit annoyed) after I asked Captain Chuckles, "Why don't you fire canister?"

Some of Tom's crew died. 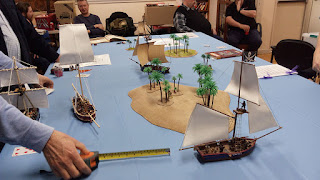 While all this was happening I was rounding the main island and traded a few few shots with Cap'n Rufus Roughhouse with no bad effects either way (I think I may have shot one of his crew).

However, the Blood Vessel was coming up fast on the Csabi and it was forced to maneuver. He maneuvered right into Rufus Roughhouse's aft. And unleashed more close range canister.

Then the Good Ship Csabi ran aground at full speed. His hull took a fair bit of damage and then I shot him and added another point of damage to the floundering craft. Charles rolled to try and get the ship afloat  again but he was stuck. Cap'ns Rufus, Tom and Don H'emmingo all moved and prepared to fire. I had the initiative so I shot first and with two accurate critical hits sunk the Englishman. 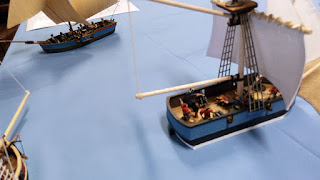 Don H'emmingo (not letting that treasure out of his sight) orders
his guns to sink the Good Ship Csabi. 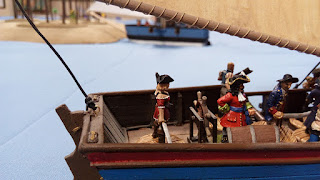 Now, it wasn't the end for Captain Chuckles: The resulting dice roll decided the ship would sink on the following turn. He rolled to get his crew ashore and half of them made it with two falling overboard. The following turn, one man swam ashore but the other drowned and became shark food. The rest of the crew made it to safety, except the captain. He rolled the crappiest dice possible and, after all of us saying he should down with his ship, it was Fate that decided that he did. 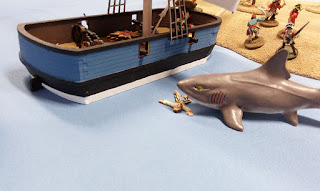 What a great game it was. Plenty of sailing, maneuvering and shoot. A lot of funny moments and, for me, the dice were on fire. Even when we tallied our treasure at the end I managed to roll the highest dice possible and sailed away with enough booty to warm the cockles of any pirates heart.

EDIT: Some ancillary photos that I pilfered from our Facebook page. 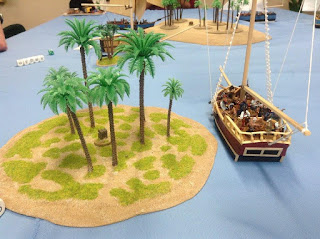 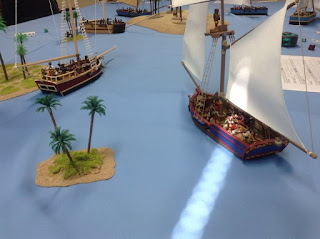 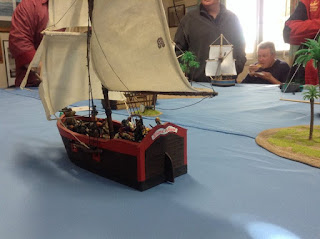 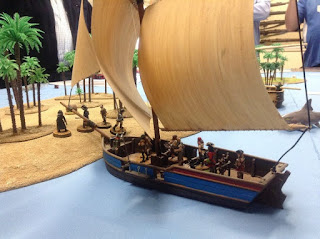 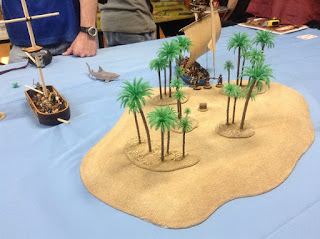 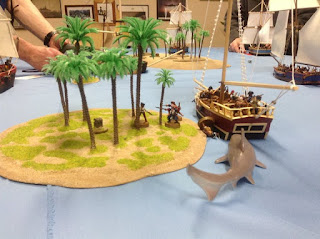 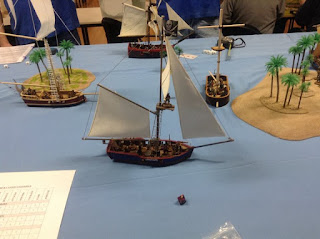 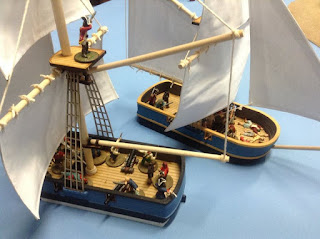 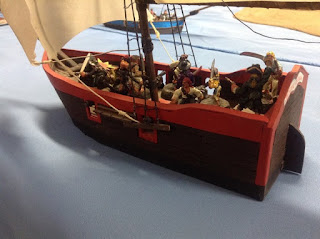 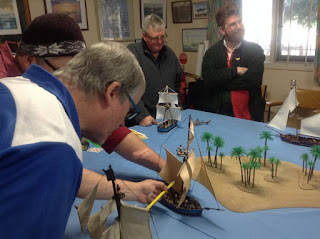 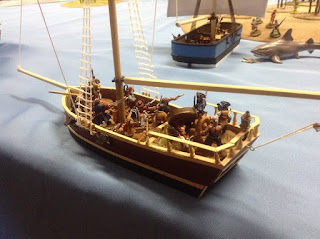 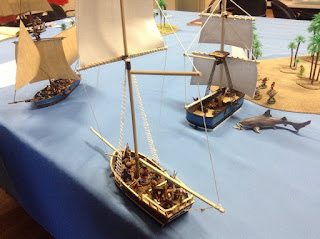