Continuing on with my current Napoleonic's binge, I decided I needed more French infantry. So I started painting. Along the way I also decided that, whilst I was at it, I should have a look at how my infantry is based. 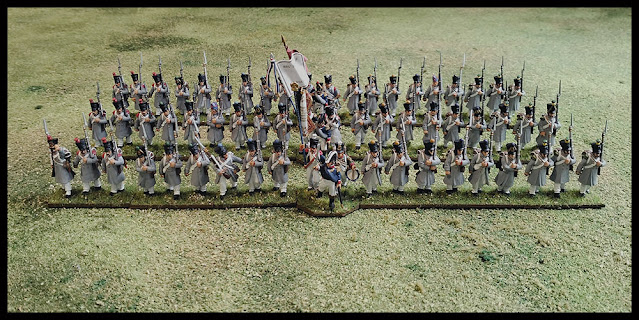 My French infantry are currently based on 50mm wide bases, 40mm deep with 6 figures in two ranks. Each battalion has 24 figures on four bases. I don't really like this basing but I did it because it sort of matched my Prussians which are based in a similar fashion. After the exchange of several emails, lots of thinking (whilst painting these recent figures) and a long discussion I decided to re-base. 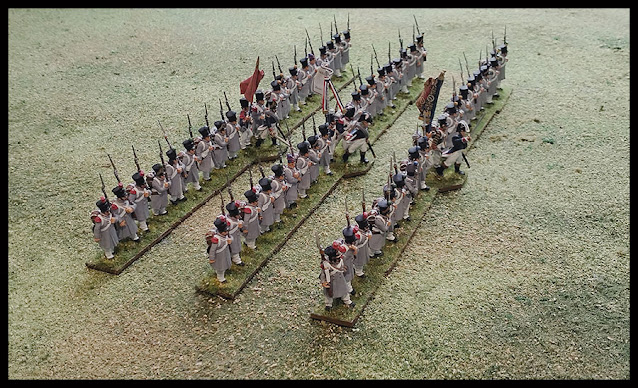 Being a wargamer of a certain age and pedigree, I started wargaming Napoleonic's using Bruce Quarries rules and Airfix figures in the late 70's. As a result I have a certain mental image of what Napoleonic Wargames should look like. I also have an affinity to BQ's 1:33 figure/soldier ratio when creating battalions and regiments. so: Single ranks of figures with correct company composition and battalion strengths is what sits right in my mind. 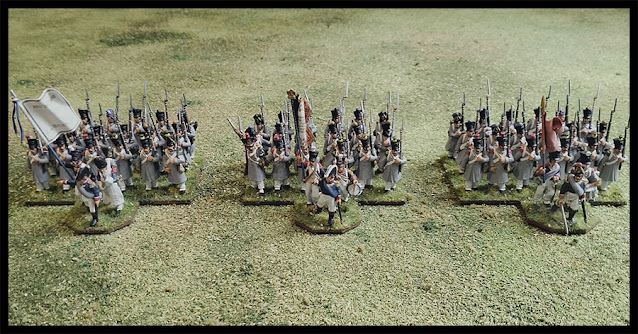 A while back I rebased my Prussians onto double rank bases for use with General d'Armee. These bases look nice, they're easy to manoeuvre on the table and they make transport easy and, as stated above I followed suit with my French. But during my recent games they just don't sit right with my image of how Napoleonic wargames should look. 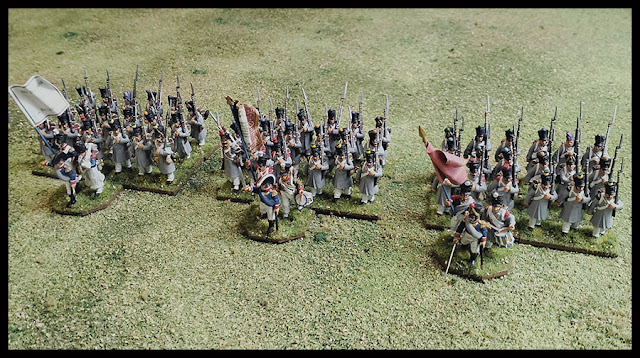 So I thunk about it and I thunk some more. Cavalry and guns are okay. It's the infantry that are the problem. I didn't want lots of little bases and I didn't want big bases and I didn't want to use sabot bases. I have a whole lot of green plastic bases from many Perry boxes so my solution was to use those bases and put three figures on each base (45mm width). This means each base is a company. Six of these to a battalion all painted with the correct distinctions. I also added a tête de colonne to give me a battalion of 21 figures: not the 24 figures of a 1:33 ratio, but close enough. 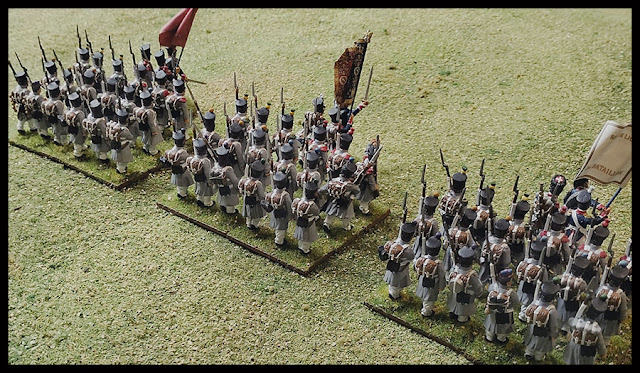 To me these battalions look correct. One of my main reservation was: "Will they work with the General d'Armee rules?" My conclusion is that if proper formations don't work with the rules then the rules are broken. Any historical game system should work with historical troop formations. If they don't the problem sits with the rules and not the formations. Besides that: We'll make the rules work in our favour!
Having said all that: Here's my newest Regiment de Ligne.
Only a dozen or so regiments to go (then it's the Prussians turn!)
Posted by IanKH at 21:20