So I've found myself a new wargaming period wherein I have become enmeshed ~ The Wars of the Roses ~ And just to make things even worse for myself I've decided to do this thing in two different scales: 6mm and 28mm.

I decided to order two 6mm armies from Baccus but these seem to be taking a fair bit of time to get here and I'm beginning to wonder if my order has been forgotten. In the mean time I decided to order a Perry plastic army deal. I decided to start by building a Lancastrian army.
And here is my first small command ~ Henry Holland the Duke of Exeter. By all accounts a rather unpleasant chap. My reason for making him is because I made a mistake when I first started applying the initial livery colours (I got livery confused with coats of arms). To rectify my mistake I did a bit of research and found a solution which ended up with me making Exeter. 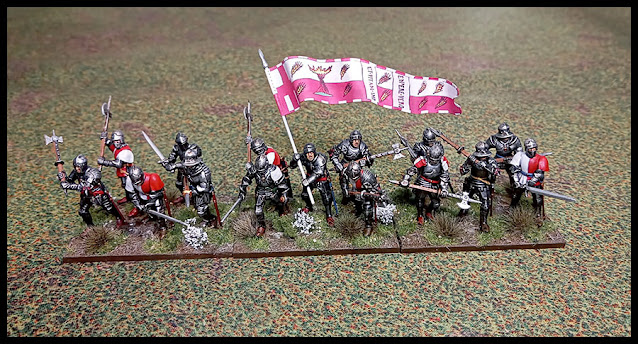 To start with I made one of unit of men-at-arms and another unit of bill & bow. These figures are pretty easy to paint and I managed to construct, paint and base two full units in one week. I expect to be able to do two or three units per week if I can keep up the current rate. 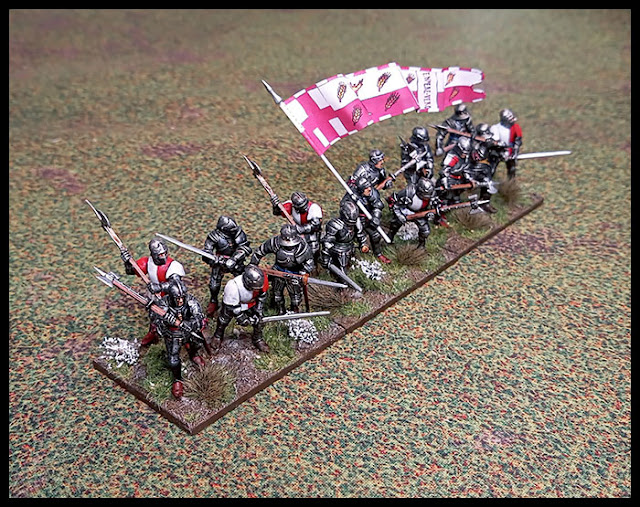 This is a fairly small starting point. I've been trying to decide if I should make an army based on a historical force or just paint up random Commanders and their retinues. I'm not sure which way I'll go at this stage.
Anyway, I decided to base the troops onto multi-bases instead of individual figures. This way I can use less figures in each unit and just rely on the unit footprint. I based the units on what I've seen on various youtube videos - In particular 7th Son who kindly gave me his Hail Caesar lists and home rules (based on the Perry's own homegrown lists etc...). 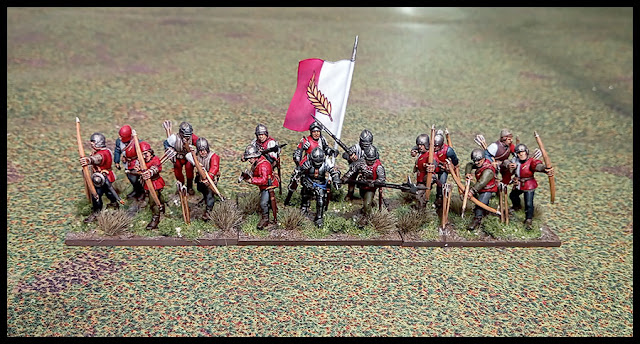 The figures are nice and they look great based in units but there is one glaring thing wrong with them that I have never seen or heard mentioned by anyone: The world renowned English Long Bows are not very long. They are modelled almost as though they are supposed to be short/hunting bows. Scale wise they are about 4 foot long. Far from the reputed 6 to 7 foot length that history books record. 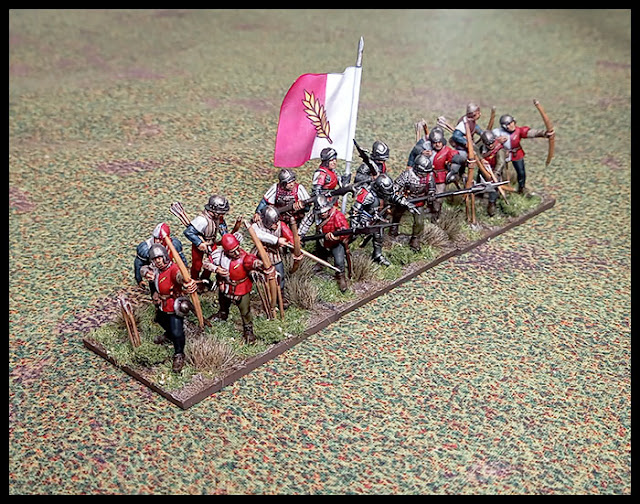 As expected doing the livery is a challenge and the main reason I've avoided Wars of The Roses until now. I was somewhat daunted at the idea of painting Exeter's coat of arms but I tried anyway and the results came out not too bad. I haven't painted this sort of freehand stuff for a long, long time.
The Duke is just one of the regular figures from the Perry Armoured Men at Arms box. I made his tunic/coat with greenstuff. I'm waiting on some metal command figures and cannon from Perry. I might make a mounted and foot version of each commander. But I might not. We'll wait and see. 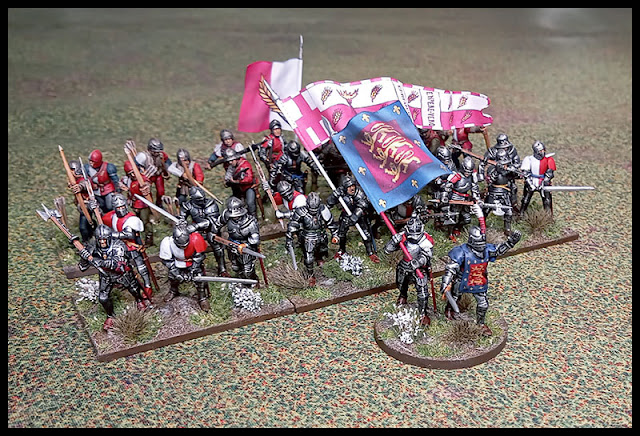 As mentioned above, these are based primarily for Hail Caesar or similar multi-based rules. But, If I want to play Never Mind the Billhooks I can always deploy them as I have below by just putting one of the men at arms bases together with the bill base. It's not perfect But It is a workable solution. 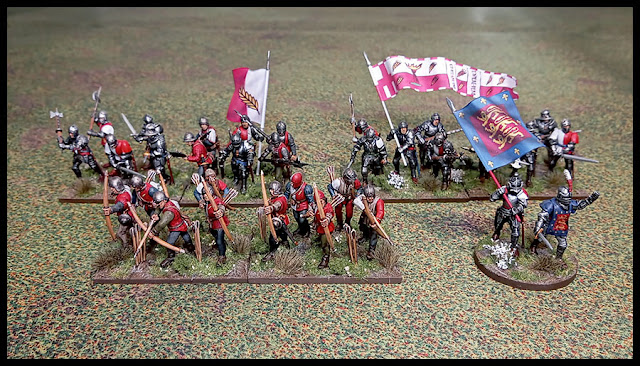 So this is the start of my newest project. Just like many of my other projects I expect that I'll spend a lot of time painting these guys and then they'll spend a lot of time sitting in boxes and one day I'll sell them all off. I hope that doesn't happen. I hope they get on the table and prove themselves in battle often in up coming years.
Posted by IanKH at 00:38

Email ThisBlogThis!Share to TwitterShare to FacebookShare to Pinterest
Labels: Hail Caesar, Medieval, Wars of the Roses