Because I ended up with a bunch of Beyond the Gate of Antares troops I've decided to start a second battle group for Warpath Firefight. This time GCPS ~ Galactic Co-Prosperity Sphere.

From what I gather (and what I'm going to do anyway), the GCPS is run by a bunch of mega-corporations. So I can't see any problem with doing a force that is the private army of one of these corporate titans.

So here's my first squad of marines using Beyond the Gates of Antares, Concord figures.

The photos are not the best (I really need a better camera) because the figures actually have a bluish sheen - Prussian blue dry brushed over black. I opted for very basic bases after trying an orange/brown stony base. Besides that, I'm a fan of simple bases if you can make them look effective. I might actually so some sort of colour coding on the bases for organizational purposes & to make them look a bit more sci-fi.

Anyhow, here's a couple of pics with their first bases and then with the new basic bases. 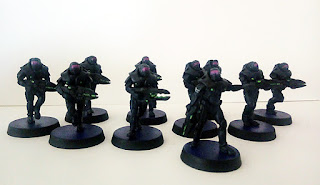