Well I almost forgot to post something again but then, remarkably, I remembered.

So here are some 15mm ancient Greeks that I've been painting for the Peleponesian Wars. All the shields are hand painted and that is my favorite part of paining them (well not the Spartans because their shields are pretty boring).

I'm doing both sides of the conflict at the same time. I eventually get bored with them and move on to something else and I haven't been doing them for the past couple of months. But I only need several more units until I can start gaming with them. As it is, right now I could combine them for a game against another opponent.

I've based them pretty simply so that I can use them for several different sets of rules but I'm planning on using Hail Caesar for these like my other current projects. You may have noticed that I previously posted some 28mm Ancient Greeks. I sold those due to the cost of the figures (considering I could put thrice as many 15mm units together for a third of the price of 28's.

Spartans on the right as they should be with heavy horse on the flank. 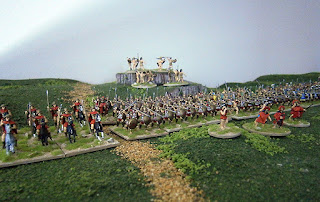 Peltasts on the hill behind & Helots in the rear rank. 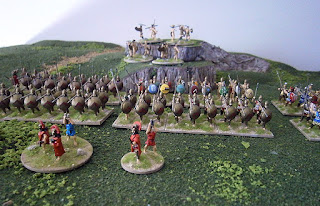 Atheneans with Cretan archers to the rear. 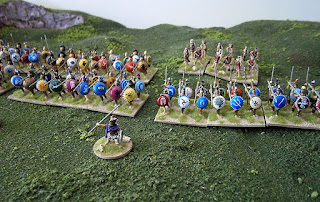