As Above, So Below

I got some more of my birthday box finished as well as another monster that's been waiting around for a month or two. I'm currently waiting for some mdf Egyptian chariots to arrive. I have plans for them and I'm keen to get started but, alas, the Australian Post are letting me down yet again (10 day wait so far on something that usually takes 3 days).

Anyway, during these past couple of days I've painted up some flyers and a burrowing D&D beast. 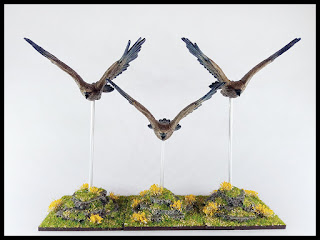 "The Eagles are coming. The Eagles are coming..." Hopefully, when one of my little figures cries this out aloud on the wargames table it'll mean that I'm going to win ( after all, it always happens in Tolkien!). These figures are from WizKids. I've seen better eagles but the other figures currently available are way beyond my ability to justify paying for them. These came in at $10 each and they're okay for that price.

Their bases come with a little clear plastic thing that fits up their bum holes. I had some aluminium tubing that worked better and got them off the ground. So I gave them a drill up their bottoms and shoved the tubes up their clackers. They came out okay. 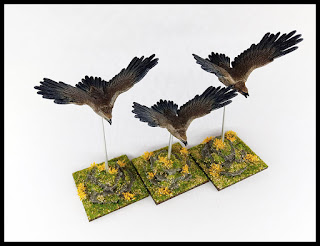 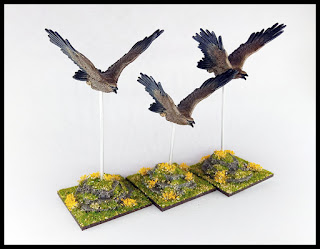 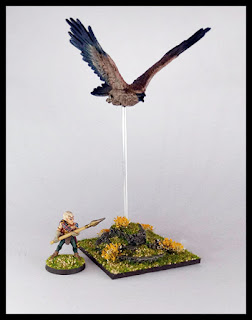 So Below:
This in an Umber Hulk and it's another Reaper Black Bones figure (I don't recall what it's official name is). I got it just because I like the look of it. For those who don't know, Umber Hulks are one of those D&D monsters that, as far as I know, don't exist anywhere else in the world other than The Monster Manual. It's one of those creatures created by Mr Gygax and friends to to fill up space in the MM and to burrow its way through campaign modules and crush your player's favorite characters. It's a fairly large figure and is big enough to intimidate. 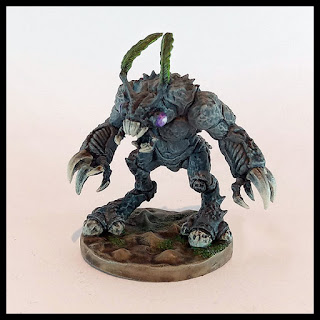 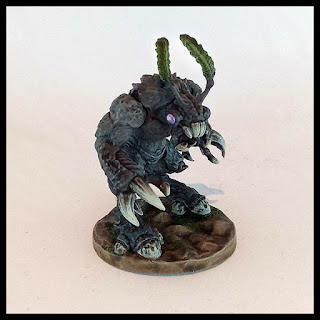 This figure has a decent base and i didn't need to re-base or do anything fancy. Just a bit of paint, a wash and a bit of dry rushing. It came out okay and I'm happy with it.
Posted by IanKH at 17:13