I needed a suitable commander for my medieval troops to give them a fantasy feel. What better than to include a monstrous, impressive creature with big wings. So, in keeping with the overall Germanic theme of my medieval troops, I created Baron von Bach-Sachenkrach. 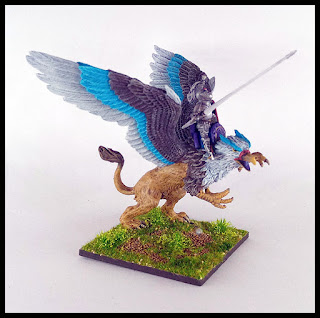 So I got a griffin which is yet another nice big monster from Reaper Bones. You just can't go past Bones for big creatures that are affordable and lightweight. The knight is a Perry, War of the Roses mounted man-at-arms. He looks okay. I added the crest on his helmet from another Perry figure - A plastic French Napoleonic Dragoon. His shield is a left over from the Fireforge Teutonic Knights set.

The saddle was a bit of a problem. I just ended up using some greenstuff. I don't know what a griffin saddle should look like so this is what I came up with. It's not great but it is what it is. 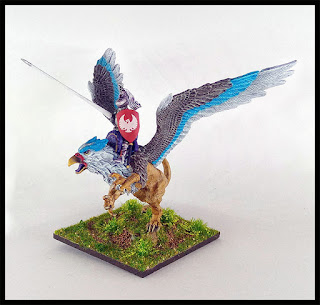 I really wanted this creature to stand out but it looked a bit dull. So I added the blue feathers which was just what it needed. The blue really made it go: Ta-Daaaaa! Also I luckily spotted an old sheet of GW Eldar decals in amongst the chaos of my painting desk. Hence the appropriate shield device. 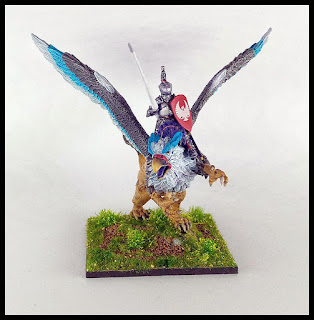 So. all in all... I have a nice fancy commander/hero to give my men-folk a bit of a fantasy flair.
Posted by IanKH at 16:41