Infection Z... It's Almost There!

I'm still working at knocking my solo zombie apocalypse rules ~ Infection Z ~  into shape and they're almost there. All of the components are in place. Everything works well. Test games have worked and can get nail biting. So it's looking good.

But... Putting it all together in a desktop publishing program is a long and tedious process. I'm using Scribus for two reasons: 1 - It's free, and 2 - My pc is a few years old and won't be able to handle the resource intensity of InDesign (my wallet wouldn't like it either). So Scribus it is. It's an awkward program and slow, but I'm getting it done. It has taken over a week to do 40 pages of  formatting but I'm almost there. By the time it's finished it should be around 55/56 pages.

In the mean time I took the time to play-test the last (3rd) game of the Intro scenarios. 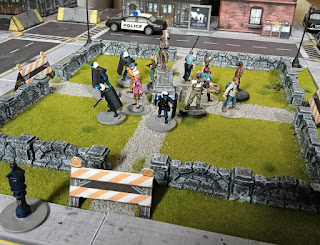 In this scenario, the group has fought it's way through the city streets over the two previous games and now find themselves in a park in  pretty open area. They're surrounded by zombies and will have to fight their way out. The group has met a patrol of police in riot gear and a TV News crew. There were about 30 odd zombies on the table at the start of the game. 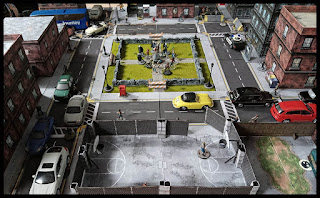 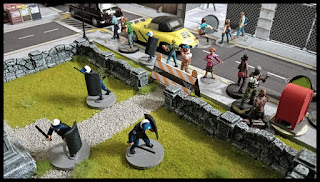 After deploying the zombies I had to draw two cards and deploy more zombies where the cards indicated. As it turned out both of these deployments were in in the "back to the city" direction. So the escape rout was clearer than it could have been. 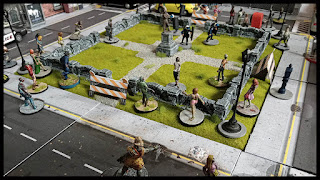 The greatest mass of zeds is coming from behind and the riot police take the main assault and hold them back... For a while. 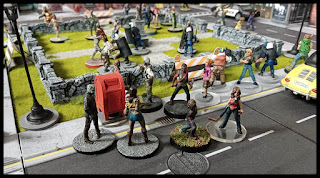 The rules for the riot armour work well. It's pretty simple but effective and gives the cops a fair bit of staying power. But they eventually got swamped and only 1 out of the 4 that started manage to escape. 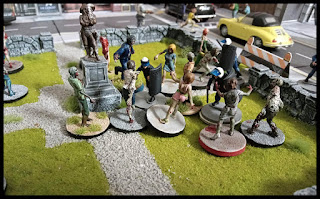 The group slowly pull back to an escape rout in one corner. They could have used other routs but pretty much got pushed in one direction. 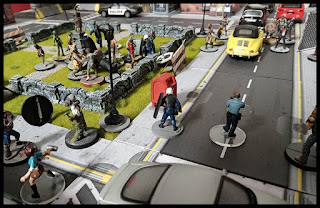 One of the game events tuned out really well. In the pic below Daisy (with the sedge hammer) and Gus the mechanic are in the path of an out of control SUV. It charges out of nowhere, crushing a zombie in its path. This happens at the end of the turn. 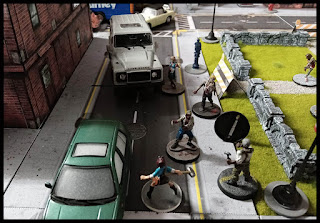 At the start of the next turn the Leader - Frank, manages to pull Daisy out of the way because she is within 3" of his Leader influence/radius. Gus isn't so lucky. 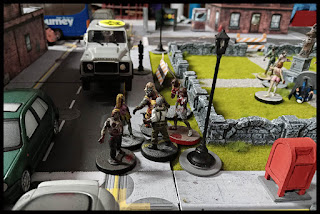 First up, the zombies have overwhelmed the riot police and are now swarming Gus. He manages to survive by the skin of his teeth but the SUV is still charging in. 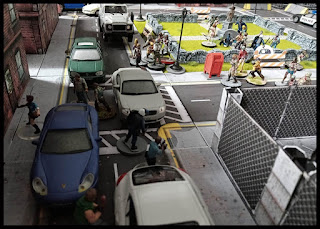 It hits the zeds, crushing 3 of them. They don't have the option to get out of the way, but Gs does. His Athletic trait is low so he has very little chance of leaping out of the way. I realised what was going to happen so I took all these pics to witness the dramatic death of Gus. 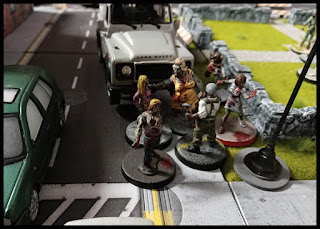 And then... Gus made is Athletic roll and lept out of the way. Very cinematic. Edge of your seat stuff. I just stood there looking at the dice thinking: "That can't be right." But it was and Gus was still standing. Battered, but still standing. 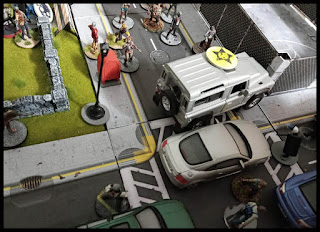 The next turn (turn 7 of 8) saw more drama. Dwayne with a new and more appropriate figure in the green top was almost off the table. The next Unexpected Event saw 5 zombies burst out of the building behind him. This was a totally random building. There were two Unexpected Events for this turn and the second was a gas explosion - In the same random building. The new dead-heads were wiped out. Dwayne was pummeled but just managed to survive. Daisy who was close just got some minor cuts. The cars protected the others. 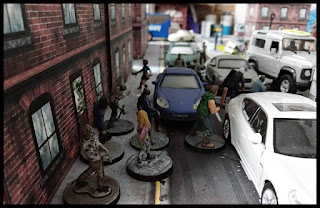 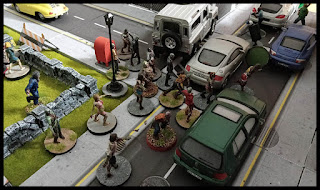 By the end of the final turn all the rest of the group, the TV News crew and one police officer got off the table. Only Frank the Leader and Gus were left and they would have had the advantage to get away for any future turns. The group met the victory conditions (50% off the table) so the game was a success. 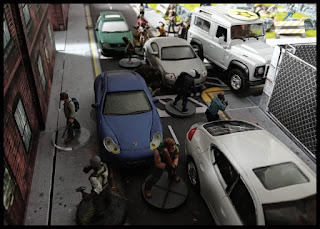 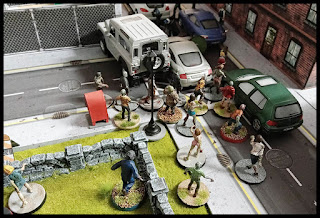 I'm really happy with the way the game is coming along. I'll have a first draft document soon but I'm sure there will need to be more tweaking. As I see it, the next challenge will be to better incorporate all of the factors other than fighting. The first little collection of games is designed to lay down the basics and introduce a few other concepts along the way.

I have a few ideas for other enemies beyond zombies and brutal gangs. I think they're good and they should make the end of the world more interesting. But first things first ~ Getting a fully established document isn't far off. 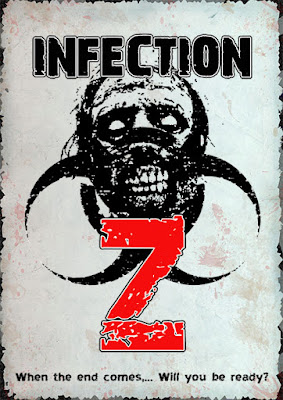