Hodges Gets a Gong

It was a cold rainy day at NWA in Croydon but Leith & I played a game of Chain of Command. The game was set up by Leith using his 28mm Pacific Australians and Japanese. I was given a choice of which side to play so I chose the Aussies because was familiar with the British platoon & I figured they wouldn't be much different ( was guessing the Japanese would be very different - and I was right).

So Leith set up the table with some very nice terrain and we rolled for a basic scenario: The Probe... We rolled to see who would be the patient an who the doctor... I mean attacker and defender. I was the defender.

The Patrol Phase:
As you expect, it was quick and simple. I pushed to my left where I thought the terrain was thicker and more beneficial. Leath pushed into the center and further to his left. 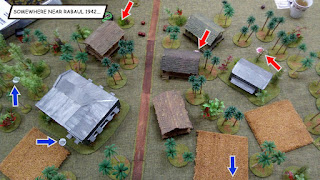 My jump off points are in blue  and the JOP on the right is actually on the table edge out of shot.

Support-wise: we rolled 4 points - so I got 2pts and chose 2 barbed wire entanglements. These I placed on my extreme right to drive the Japs in towards the center. The Japs took a grenade launcher/mortar section and an MMG section.

The Japanese Advance:
The Jap's came on. And they kept coming on... Three phases in a row. Fortunately, many 4's were rolled as well as a couple of 5's so the onslaught wasn't as overwhelming as it could have been, but most of them got onto the table before even one Aussie poked his head up. 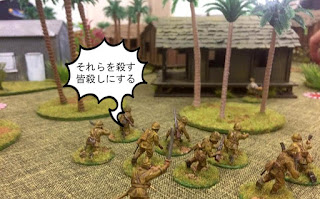 But finally, my troops started to arrive. I rolled well and brought on two sections, one on the left and one on the right. Both took a tactical stance. The 2" mortar and the platoon sergeant came on in the center. He ordered the mortar to fire HE to no effect. The Jap's, in retaliation almost killed the lone Sgt but he survived with a minor wound and no effect on the Bad Things Happen table.


There's the missing JOP - Right there! 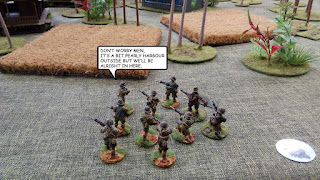 The Jap's started moving forward with their next phase but they were a little slow. However, a MMG moved into a good firing position that was due to give the section on my right a hard time. My last section deployed into the large tin building in the center and took up defensive positions. The blokes on the right moved into the crop area. 2 Section on the left, led by the almost famous Corporal Hodges, crept forward uncertainly. 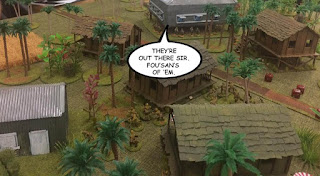 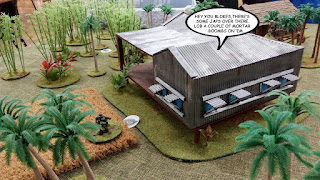 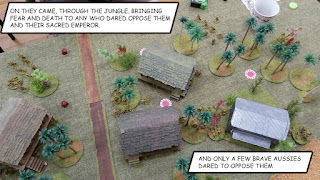 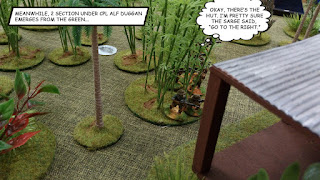 Then the Jap's opened up. Machine guns, mortars,  rifle sections... everything they had. They killed several of my Aussies and my own shooting was pretty ineffectual. I was getting hits but not causing any damage. 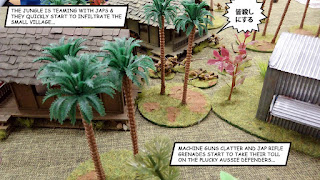 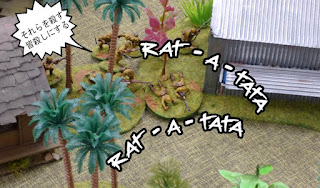 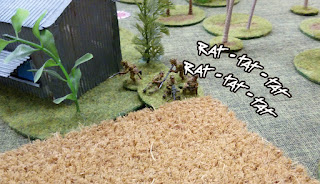 On the left 2 section under Corporal Hodges moved forward towards one of the huts near the center-left. The other two sections were getting hit hard by Tojo without doing much in return. The mortar tried laying a smoke screen but it was off target. They also fired their last HE which had zero effect.

It was about this time that I remembered that the scenario had a victory objective: Get one section off the enemy's table edge. 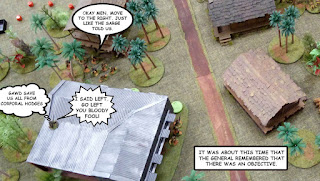 So, 2 Section moved to the left by squads (the rifles moved while the Bren team fired). A lucky shot by hit a Jap section leader and knocked him out. In the following phase this section couldn't shoot at Hodges and his men, which was a lucky break because a second attempt to lay smoke went awry again.

My next command  roll seemed pretty crap with nothing that could get Cpl Hodges & 2 Section moving but... I had two 2's to make a 4  and my platoon commander wasn't yet deployed... 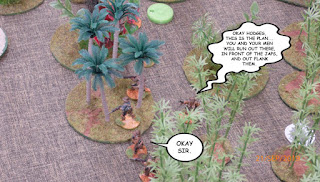 And he got 2 section moving. And that wayward smokescreen came into play and covered their movement... 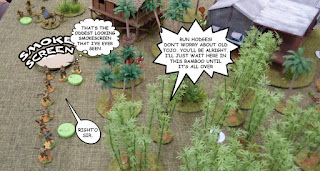 Look at that Jap section at the top of the pic behind the smoke (they're the ones with a knocked out section leader). They let out a mighty cry and charged...

Through the smoke they came and Cpl Hodges had his men ready. The Aussies took two casualties but they wiped out the Japs to a man!
I rolled six 6's and two 5's. 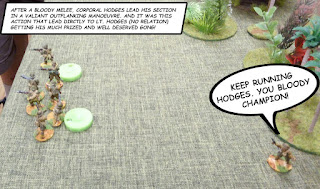 The command dice for the following Aussie phase were, once again, bloody awful. But all those 4's did allow the Pl Commander to move up and use a command initiative to get 2 section moving again. And so they made it to the table edge and snatch victory from the jaws of defeat.

No doubt, the plucky Hodgy led his section into the rear of the Jap menace and rained terror on their ranks.

It was a hard fought game and it looked certain that I was going to lose. My shooting was awful. My troops were hitting but failing to cause any real damage. At the same time Leith's shooting was slowly wiping me out.

And it is true that I remembered that the victory objective and that I had a section well placed to take advantage. I also realised that Leith got too involved with killing my troops and had lost sight of the objective. So that helped.

Having said that, it did come down to the wire. My other two sections were just hanging on by the skin of their teeth. My sergeant was wounded as was one section leader. One more Bad Things roll and the Aussie's were done for.

Thanks to Leith for a great game. Only my third of COC, but I'm getting the hang of the rules now.