After a bit of ancients wargaming, I decided to get some of my 15mm lead pile painted up. What I'm really lacking is cavalry, so that's where I started. I finished painting the Roman Equites that have been sitting on my desk, half painted and looking at me with their big brown eyes... They looked unloved and forgotten so I gave them some love. I should get some more but I don't think I will. 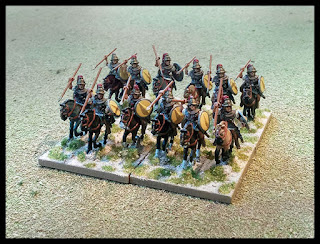 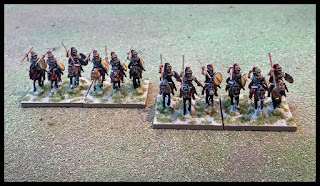 Then I finished off the horrible Xyston Tarentine cavalry. I finished what I had and I have vowed to never buy any more of them! They look okay once painted but they are crappy figures. One of the horses needed some sculpting done on its legs to get it up to scratch, and another was so badly cast that it couldn't be saved and I replaced it with a spare Macedonian Companion horse that I had in a box. One of the riders needed to have a new foot sculpted. I really don't like these figures at all! 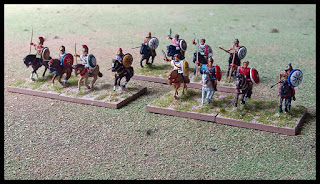 And now for the Socii you've all been waiting for...

Next came some Italian heavy cavalry. These figures are from Forged in Battle. I've had a few packs of FiB figures for a while but these are the first ones I've painted. I'm pretty happy with them. They are a tiny bit smaller that Xyston but, they're not in the same unit so they'll look okay. They add a nice dash of colour and variety to the Roman's and can also be used to fight against the Romans. The only thing I don't like about them is that there is only a single horse pose. Other than that, they're easy to prepare, nice to paint,and they look pretty good. 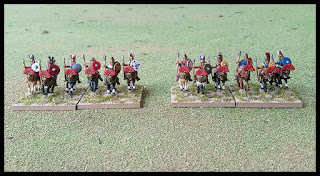 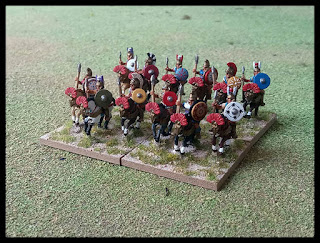 I had a look through this blog before posting these new figures because I wasn't sure what I'd painted and posted before. My last efforts for painting ancients got sidetracked into doing my 6mm Siege of Rhodes back in December 2018. Nothing unusual for me, but it does make me lose track of what I've previously done.

Anyhow, the Italian cavalry above, is intended to go with my other ancient Italian infantry. These troops make up my Socii.  And a beautiful bunch Socii they are. I discovered that I'd never posted the finished project. I'd posted the light javelinmen and a few of the spearmen but not the finished result. So, here they are: better late than never: 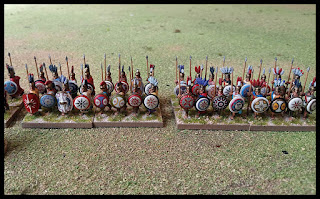 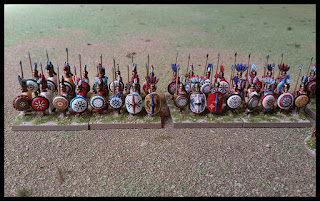 I have more of these to do and I will do them in the future (about enough for another half a dozen stands). But I currently have 4 units of spearmen and 4 units of light infantry javelins. That's enough for the moment. They are colourful and they look really nice so I'm pretty happy with them.

Something I don't understand is why most wargamers make the ancient world look dark and dull. I blame the movie 300.
Posted by IanKH at 03:11