I've managed to paint a few more figures to add to my growing fantasy collection. It's times like these that I regret selling off all the fantasy figures I've painted in the past. I could have had hundreds of figures just waiting for me to use, but I have a problem with figures sitting in boxes where no one can see them. I just have to set them free.

At least it gives me an excuse to paint more.

Just a few heroes (or characters) for today.

She Elf Knight: This first one is a Reaper Black Bones figure. I don't know what I'll use it for but it is a nice enough figure. I think this one is a dark elf lady or an evil sort of elf. I'm not sure. She was easy to paint and came out looking okay. 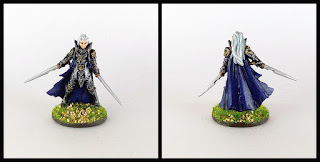 Elfin Prince: this one's a kit bash. The body is a Conquest Games archer, his shield arm is from the Conquest Norman Knights box. He sword arm and head are from the Oathmark elf box. His cloak is from the Fireforge Teutonic Knight box. He came out okay for a bunch of odd spare bits. Not bad for a freebie figure. I think I'll make him his own company of spearmen so he can lead them into battle.

Boring Elf: This one is from the Oathmark metal elf command set. Not a great figure but he came out okay. 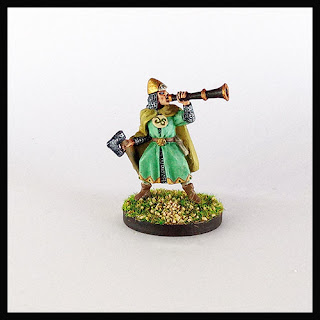 Wood Elf Hero: Another of the eM4 figures I recently ordered. An old Grenadier figure I think. This one is great. A lovely clean sculpt with lots of character. I really enjoyed painting him. I'm not very good at painting chequered patterns but I gave it a try for his shawl and it looks okay. I'm pretty happy with this figure and I really like his spear. I hope I can get more of the figures in this range in the future.